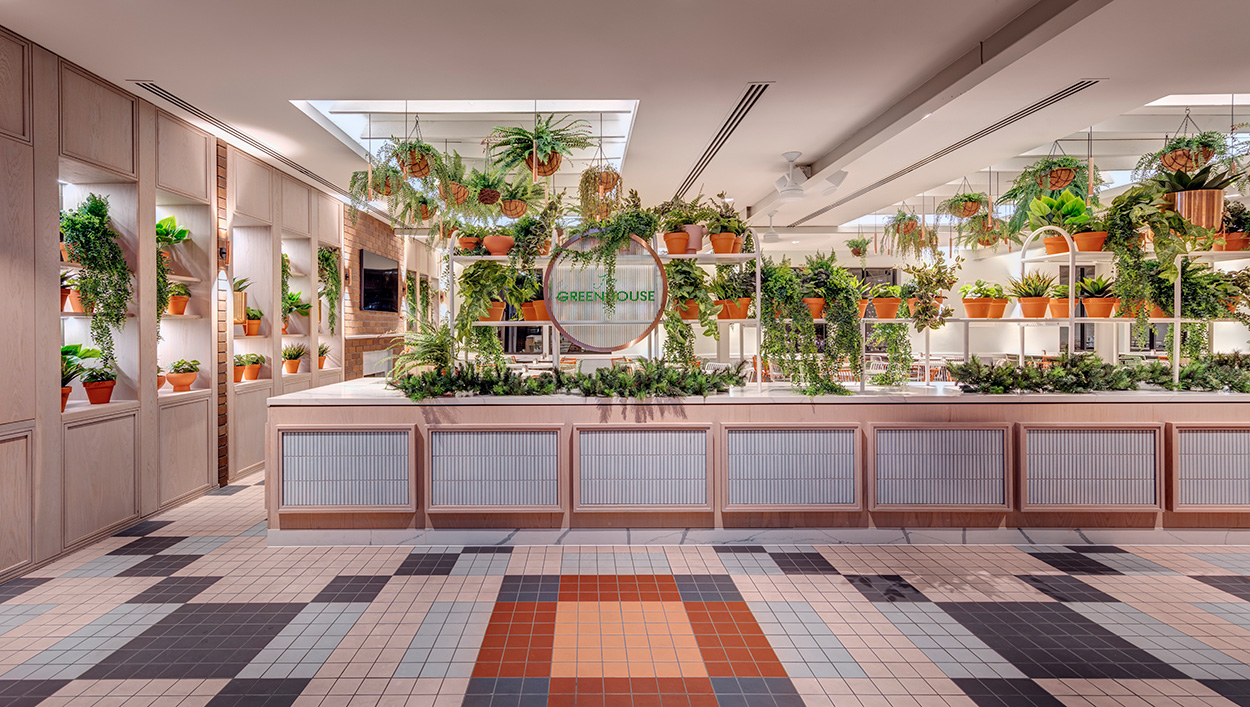 The Ambarvale Hotel is a ‘super pub’ in Sydney’s west. Well, it is now. Not so long ago it was big hotel on life support, surviving on the opioid drip of pokie money.

venue caught up with Ambarvale Hotel’s owner Colin Parras only a matter of weeks into the pub’s relaunch and he was remarkably calm. Calm considering the huge transformation he’s pulled off. Did I mention this is a large pub? Ambarvale Hotel seats 600. 600 seats!
The hotel is more like a mothership to a variety of standalone venues. You could spend an evening at the Ambarvale Hotel every day for a week and not repeat the same experience.
Such is its capacity that the rebooted pub really needs to cater to everyone. Sounds like a cliché but the Ambarvale Hotel’s offering has to dispense with any and all barriers to entry. Got kids with you? That’s okay. Just want a coffee and a chat with friends. Easy. Enjoy a flutter and your privacy. You’re covered. Just after some lunch? Need to organise a function? Are you a smoker? On your own? A pensioner?
Anyone and everyone is welcome.
This ‘come one, come all’ ethos is like a cross between a mission statement and the commercial reality of running a super pub — this is no time to do ‘niche’.
“We bought this business with a heavy reliance on gaming revenue,” recalls Colin Parras. “It didn’t really have a viability without it. We thought that a pub with such a large footprint could do a lot better. That’s why we came in with a heavy food and beverage focus. It’s now a pub for everyone to enjoy. Gaming is important but is just another part of the business, we’re now a one stop-shop for food, beverage, entertainment, functions, cocktails, TAB, coffee, whatever you want.”

Colin has worked with Paul Kelly Design for 20-plus years, dating back to the launch of the Soho Lounge in Kings Cross.
Paul Kelly’s firm distinguishes itself thanks to a deep understanding of the commercial realities of hospitality. Yes, Paul Kelly makes things look nice but his firm’s input helps guarantee business success not just social media chit chat.
“We see ourselves as being in the hospitality development sector,” observes Paul Kelly. “Because of our 22 years experience and the 500-plus venues we’ve completed, we can address so many different facets of the market. Hospitality development has got very little to do with the colour palette or the choice of carpet — it’s not just about the way it looks but the way it functions.
“Without success we aren’t in business. If these ventures don’t perform then why bother paying for Paul Kelly Design? Sure, of course, it’s got to look good, function well and be durable, but it’s really about long-term popularity.
“In the case of the Ambarvale Hotel, for it to be popular, it was about understanding a very, very broad demographic.”
Nothing about the old Ambarvale Hotel was retained to inform the look or layout of the reboot. Instead, Colin Parras, Paul and his team looked at the suburb and its surrounds and determined who they would appeal to and how. Yes, they wanted to appeal to every man, woman and child in Ambarvale but more than that, the hotel would be a destination for a much larger Campbelltown catchment.

“Fresh food and fresh beer,” says Colin Parras of the key offer. “Getting the fresh food right is a big job but a manageable job, getting fresh beer right is a whole other level of difficulty .”
Welcome to the Ambarvale brewery. There are four large vats which has the capacity to produce some $5m worth of beer each year. The Smart Brew System allows Colin Parras and his team to take care of the brewing in house — no need to employ a master brewer.
“It’s early days,” remarks Colin Parras. “And it may well take 12 months to fully appreciate what the brewery brings to the business. Yes, there’s a large marketing component to the brewery operations, but I think anyone who’s enjoyed a fresh beer with their fresh food will understand the appeal.”
The brewhouse has the industrial appeal of a cold war-era Gdansk bier house. Like everything about the Ambarvale Hotel the dimensions are supersized.
Colin mentioned how offering ‘fresh food’, on a large scale, is challenging but manageable. It all starts with an investment in the back of house capacity. Again, Colin Parras and Paul Kelly have been around the block enough times to understand the importance.
“Many operators will only concern themselves with front of house,” observes Paul Kelly. “And for them it’s all about maximising traffic. But for a super pub like this to succeed — and this insight comes from hard-won experience observing badly planned venues that haven’t succeeded — you need to work with the client to seriously invest in back of the house.
“It’s all well and good getting people through the door but if they have to wait an hour for a meal or the quality of the product isn’t there or if there’s a stock shortage or staff go missing… well, there are many reasons to get your back of house right.”
The Ambarvale Hotel back of house is industrial in its proportions. And every aspect has been considered. What’s more, there’s an eye to the possibilities of growth.
“You don’t want to grow successfully and then not have a back of house that can grow further with the client’s aspirations,” continues Paul Kelly. “The facilities — the kitchen spaces, storage, bulk cooking, keg rooms, the delivery docks — they all need the ability to flex.
“The back of house really needs to suit the staffing requirements as well. A properly designed back of house can save an operator $200-300,000 a year, thanks to staffing efficiencies.”

PART OF THE COMMUNITY

The Ambarvale Hotel by necessity is a long term prospect. This isn’t a venture for a ‘flash in the pan’ operator looking to make quick, easy buck. The numbers are big and require an experienced team who is unlikely to be spooked by the occasional head wind.
“It’s an intelligent business concept,” confirms Paul Kelly. “It’s not one of those venues where you worry too much about its success; it’s such a long term play that will naturally grow because there’s absolutely nothing wrong with it as a business. It’s not risky, it’s just a very, very intelligent fitout.”
And one that’s been quickly adopted by the locals, with its reputation expanding inexorably throughout the area.
“The feedback has been very heartening,” say s Colin Parras. “Locals, who know I’m part of the team but don’t know I’m the boss, have approached me and thanked me for what we’ve done for the community by investing in the Ambarvale Hotel. That’s hugely gratifying.”. 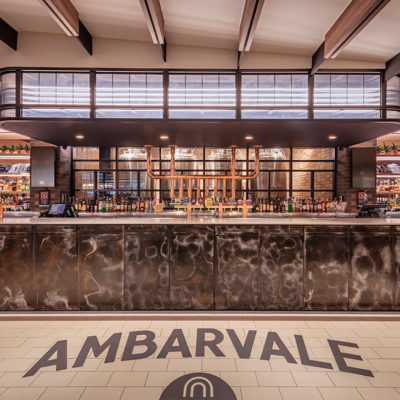 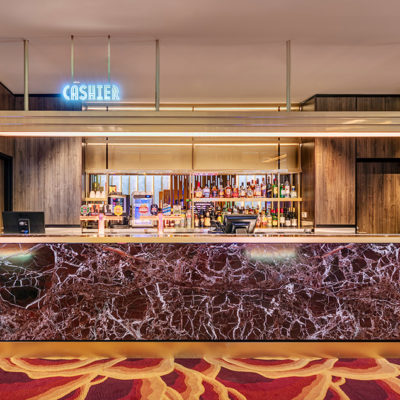 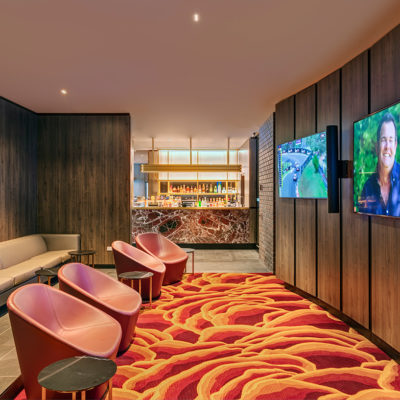 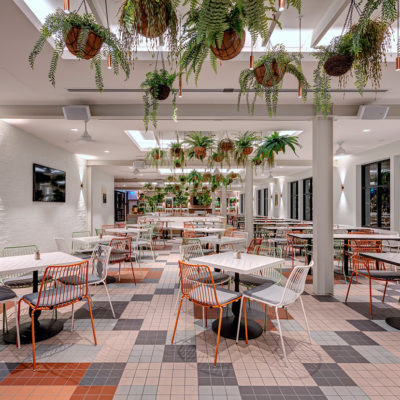 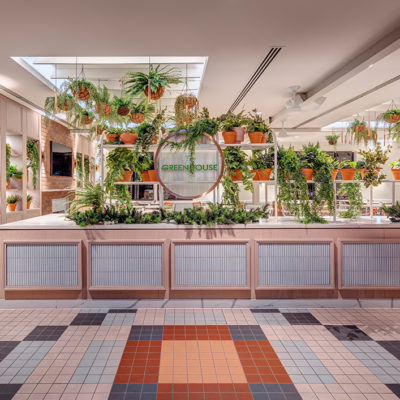 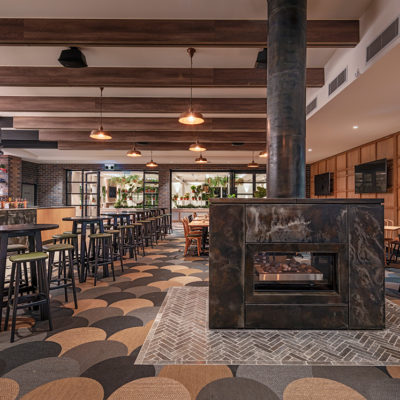 I may have insisted earlier that ‘this is no time to be niche’. That’s true of the venue as a whole but not necessarily true of a venue within the venue.
Just witness, if you will, the Ambarvale Hotel’s Sports Theatre.
It’s not a Sports Bar (Ambarvale already has one of those with a huge ultra-narrow bezel LG Commercial video wall and TAB), it’s far more chilled than that.
Thanks to some nifty AV integration from TTE (ably led by Tim Teasdale), the Sports Theatre is an intimate room for sports fans to enjoy a comfy chair and a theatre-style entertainment experience. Think of it as a gold class lounge for introverted sports nuts.
Three LG Commercial panels line the front wall with a pair of Bose MA12 column speakers that provide nice tight sound dispersion, and when teamed with the Bose MB210 subwoofers provide more than enough excitement come game day.
Elsewhere Bose DS series loudspeakers are dotted throughout the venue, inside and out, both in-ceiling and surface mount. Q-Sys takes care of the audio management and processing. QSC and Bose amps power the loudspeakers.
All the incidental 55- and 65-inch displays are from the LG Commercial Hospitality range and come with a built-in digital tuner. Tim Teasdale relies on ZeeVee HD modulators to feed the screens content via coax — Foxtel, Nightlife music video or an input source.
“We’ve approached this project with an ‘everything everywhere’ philosophy. There are multiple zones, and each has its own source select and volume control. There are wall plates in each zone and you can also wander the venue with an iPad (running AMX) to control levels.”