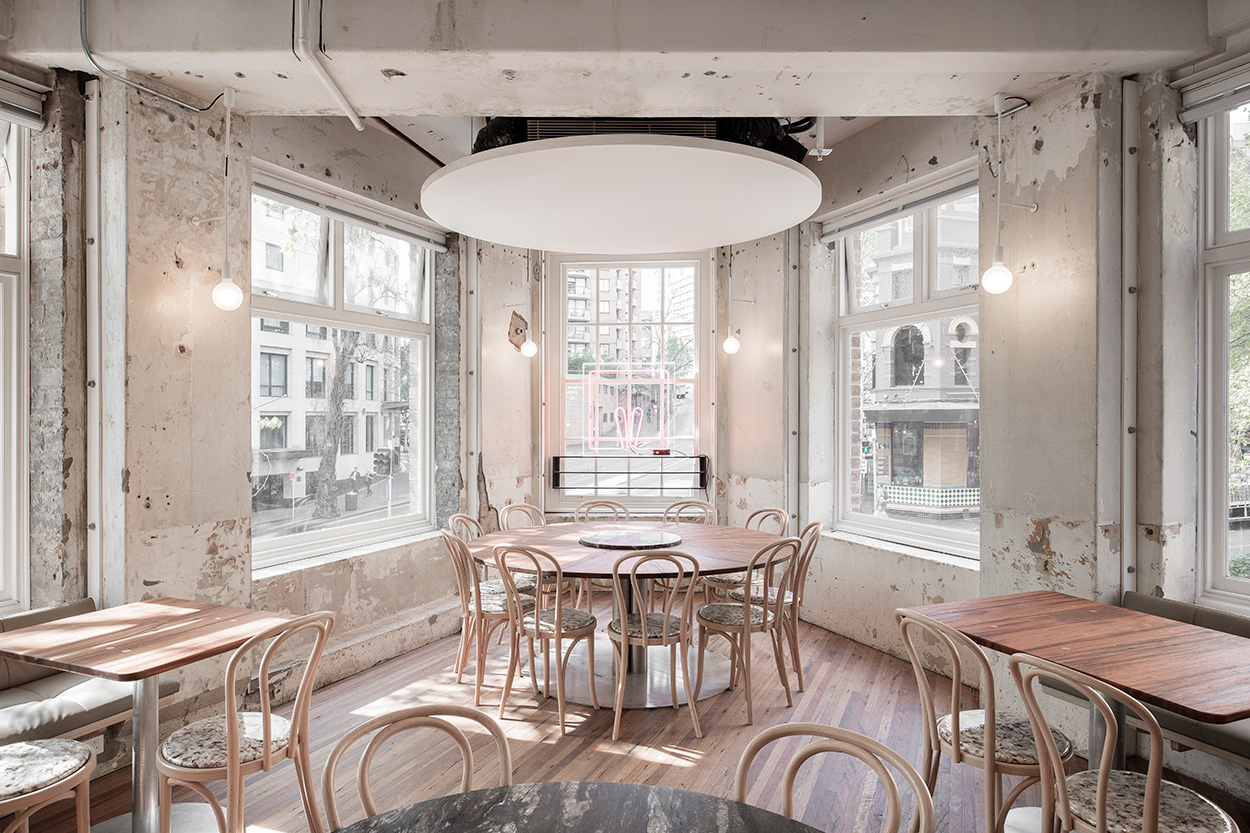 TAKING IT ON THE CHIN CHIN

The position of Chin Chin General Manager is widely regarded as the toughest gig in Australian hospitality.
Chin Chin is wildly popular. Has been for nearly 10 years. There’s always a queue. You can book a table for six or more people, otherwise it doesn’t matter if you’re Joe (or Jill) Blow or Kanye (or Kim) West, you have to get in line with everyone else.
The General Manager has to ensure the wait is worth it. As well as field livid calls from Kanye’s manager (I’m just making the Kanye thing up, by the way), the GM must guarantee an experience for the (up to) 1000 covers a week, 364 days a year (yes, Chin Chin is open every day except Christmas).
Fundamentally, the reason for Chin Chin’s long reign at the top is in its ability to maintain its quality.
And now Chin Chin is creating the same stir in Sydney.

Sydney is a graveyard for Melbourne restaurateurs. And vice versa. There are a few notable exceptions that prove the rule. One such exception is Longrain, which opened up a Melbourne outpost in Little Bourke Street some 10 years ago after enjoying enormous success in Sydney’s (then unfashionable) Surry Hills.
So let me see: contemporary Thai restaurant has runaway success and serves to define a new eating precinct? Sounds familiar, non?
The Lucas Group, which owns Chin Chin as well as its younger Melbourne-based siblings, Kong, Hawker Hall and Kisumé, decided the time was ripe to give Sydney a crack. You could hardly accuse the Lucas Group of acting precipitously. The Chin Chin brand was well defined and Sydney was gagging for it.

The Chin Chin Sydney site is a cracker. Check the box item for a potted history, but suffice it to say, this prominent Surry Hills corner site is ideal.
The Lucas Group engaged a Sydney interior architect for the task of bringing the Chin Chin spirit north of the border. George Livissianis is an inspired choice. You’ve seen his work in the pages of venue aligned to projects such as the Apollo and Cho Cho San.
George Livissianis: “My first task was to understand the Chin Chin brand.
“The brand is definitely a bit cheeky. It’s the first food/restaurant brand I’ve worked with that has its own mascot. And the Chin Chin cookbook; it’s hand illustrated like a graphic novel. Chin Chin is fiercely independent and iconoclastic.
“From there, it was easier to break down the site and give each space its own spirit: the bar [Gogo Bar] versus the dining room versus the function space [Chii Town].
“We were able to simplistically take the Chin Chin colours of black, white and pink and apply them across the three main spaces. The dining hall lent itself to being more white; the bar lends itself to being black and intimate; while the function space could be more obviously branded pink.
“There are plenty of design elements that help to make the space, touches such as the seat cushions in the dining room with natural goose feather wrapped in plastic. Then there’s the roof sarking that acts as curtains in the function space. It’s great to have some quirk. I think these elements are the things that can make a space. You need to invest the time and energy into it. It has an effect on people’s experience even if it’s subconscious a lot of the time.”

When Chin Chin is in full swing, there’s a veritable crackle of electricity in the air. It’s exciting, and a little like Matrix ‘bullet time’: it feels like you pack in a full night’s worth of stimulus into an hour.
As General Manager, Emilio Basone, has the job of ensuring all the frantically spinning cogs mesh.
Emilio Basone: “I’m always amazed seeing our restaurant in action. On a Saturday night it can be mental, but it’s amazing to see our incredible kitchen team produce consistently great food… fast. As a guest, there’s no sense of having to wait. It’s just brilliant.
“Training is a huge aspect. It’s not just dropping a plate at the table, it’s taking time to introduce the dish, explaining the flavour profiles and other aspects. There’s regular team training at all different levels, right from Day 1. It’s a huge part of the business; ensuring our teams feel confident, such that when a new wait staff member finally goes out onto the floor, they’re armed with the confidence and knowledge to entertain and inform the guests, ensuring a seamless experience.
“When I stand at the door and say goodbye to everybody, we get some fantastic feedback. ‘The food’s amazing.’ ‘It’s incredible.’ And the team here is just phenomenal: the consistency of the offering given the volumes is astonishing.”

The Griffiths Teas building sits like a streamlined ship in the apex of a tight triangular block in Sydney’s inner-city suburb of Surry Hills. Designed by Kent, Budden & Greenwell architects, it opened its doors in 1915 as the NSW warehouse of the Melbourne-based import company.
The heritage-listed, red-brick beauty stood unused for almost 30 years until it was bought in 2014 by developer Michael Grant of Cornerstone Property, who appointed architect Alex Popov of PopovBass to bring it back to life. Popov converted the seven-floor structure into 31 loft-style residences and put seven new penthouse apartments on the roof.
Chin Chin is the prize tenant on the ground floor.
George Livissianis, Architect: “It’s an amazing site with so much texture and character, which really influence the plan of the whole space.
“We anchored the whole design to the middle. As guests circulate they’re always attached to the original parts of the building, the original facades, the ceiling, walls, and what’s amazing about that space.
“It took some work to get all the mechanical services consolidated into the middle. But it was worth the effort.” 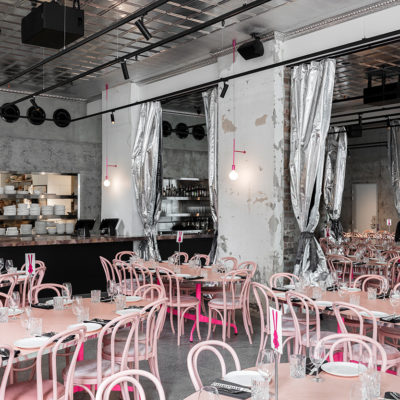 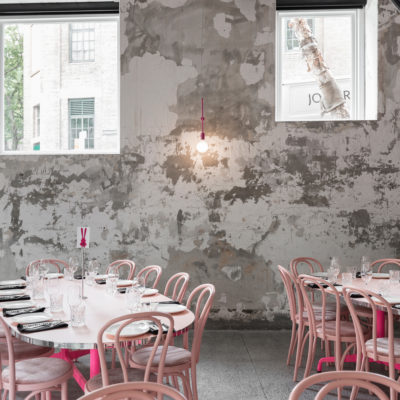 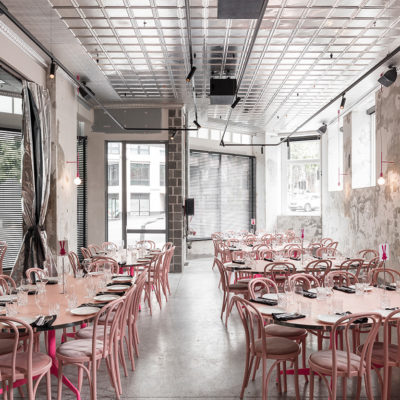 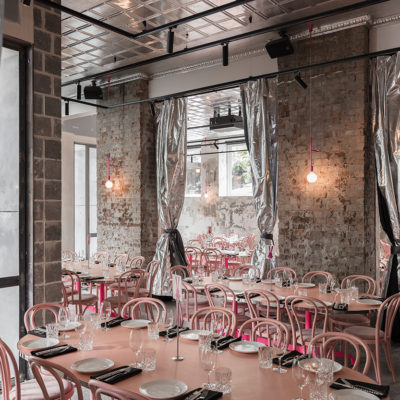 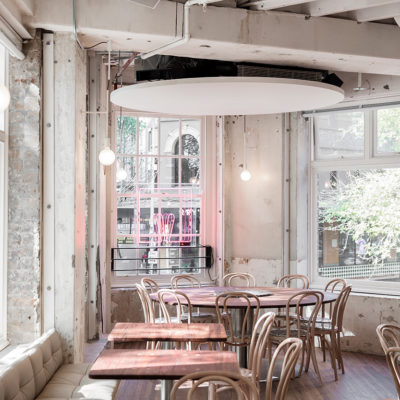 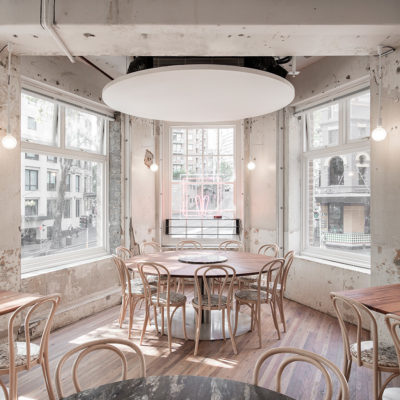 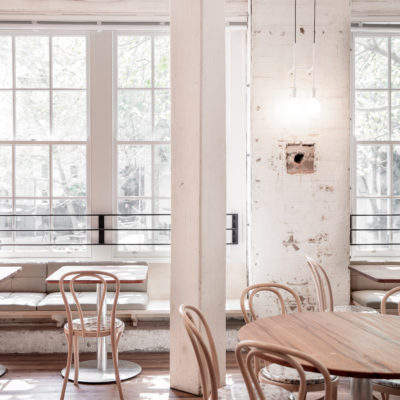 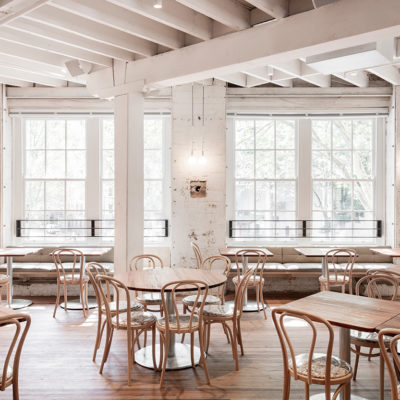 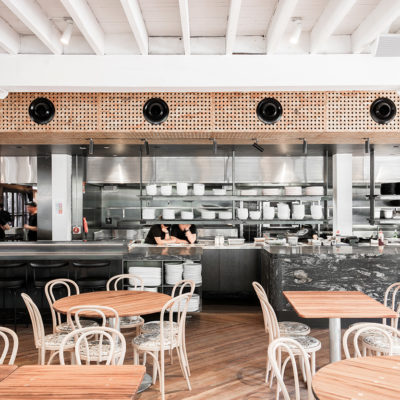 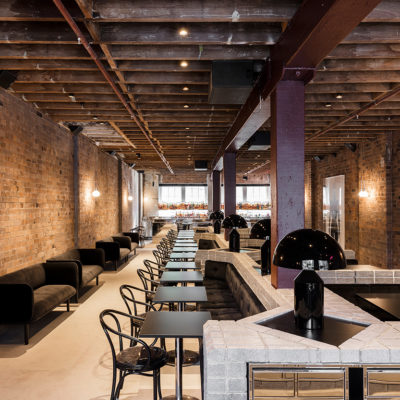 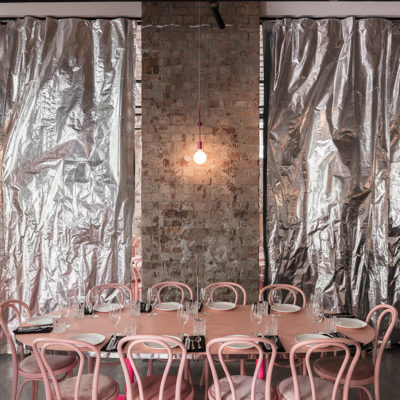 George Livissianis: “Chin Chin is a restaurant built around the energy of the space. The architectural and interior components; the lighting; they all conspire to help guests rub up against each other. It contributes to the excitement; the ambience; and the hype.
“Music is such important atmosphere component in Chin Chin. As soon as you enter, you hear and feel the music. You’re energised by it. That’s the commencement of your Chin Chin experience.
“It shows how so many aspects contribute to the bigger picture and you can’t neglect any of them.”
The audio is based on the highly regarded Martin Audio CDD loudspeakers. In all, there are 46 x CDD6 surfacemount loudspeakers supplemented by 14 x BLX 210 dual-10 inch subwoofers.
The CDD box uses a coaxial driver arrangement which allows the loudspeaker to be mounted in either portrait or landscape orientation without sacrificing any off axis performance. What’s more, the CDD loudspeaker pioneers an innovative waveguide that ensures patrons right under the loudspeaker experience the same high frequency performance as those further away. Some 14 x QSC CMX800 amplifiers power the system.
Given the immediate proximity of residential tenants upstairs, every effort has been made to prevent sound being transferred through the building structure via the use of isolating speaker mounts.
A QSC Q-SYS Core 110 provides all the centralised DSP to manage the EQ and zone control. The management can make volume tweaks via an Q-SYS iOS app on their device.
The installation was expertly taken care of by Beyond AV, with Angelo Andrews running point.