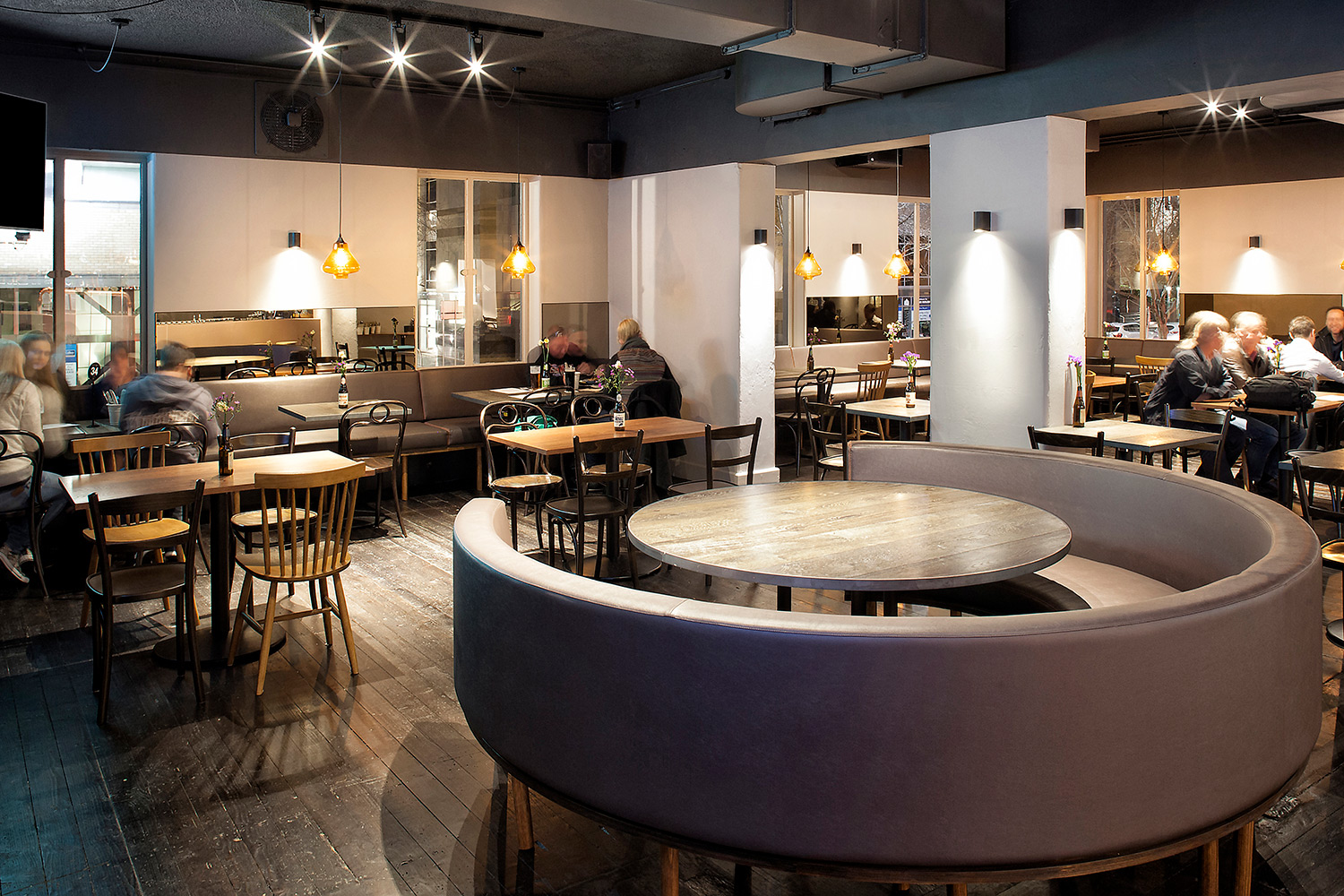 Open Door Pub Group knows the value of a big pub. It built its fortunes on the suburban monster pub, Geebung Polo Club, then expanding into Melbourne’s CBD where it did wonders with refurbishment of The Duke (Issue 55) and others.

Dixon Hospitality Group, another privately owned venture, with Bruce and Michael Dixon at the helm, also knows a thing or two about big pubs, with the likes of the Middle Park Hotel and Newmarket Hotel in its portfolio.

In 2015, Dixon made its move, making Open Door an offer the directors couldn’t refuse. And to bolster its functions chops, Dixon also acquired Melbourne Venue Company. As of going to press, the Dixon Hospitality Group has 30 venues in its portfolio, mostly pubs, mostly within 15km of the Melbourne post office.

venue met with Craig Ellison, to catch up on the developments and have a walk through the Imperial Hotel’s amazing rooftop beer garden (more in a future issue) and the Crafty Squire in Melbourne’s CBD. Craig was a Director of the Open Door Pub Group and is now Dixon’s COO after the acquisition.

“We sold to Dixon Hospitality Group just prior to Christmas 2015,” Craig Ellison recalls. “At the time we were going through a heavy construction phase — The Imperial, Crafty Squire, Auburn Hotel (née Geebung Polo Club) and the Great Britain. We had approval from the bank to get going and after the acquisition Dixon also gave the green light to get the work done.

“What did Dixon bring? They brought a lot more capital but also a wealth of knowledge. Bruce Dixon was boss of the Spotless Group and his company has a book of blue chip corporate contacts as a result. It means we can more readily attract those top-end functions which we’ve traditionally not been so strong in.”

WHAT’LL IT BE SQUIRE?

Crafty Squire has been reopened since late last year after a Ramvek-led renovation with Newline consulting on the interior design.  As the name suggests it’s a joint venture of sorts with James Squire. It combines the existing James Squire Brewhouse with erstwhile Portland Hotel in Melbourne’s Russell Street. More than knocking a few walls through, the corner site has doubled the old Brewhouse’s capacity by moving the dining room upstairs in much larger digs, and replacing the old ground floor dining with the Crafty Bar. Another bar/function space and terrace makes the most of the first level, while the brewhouse bar is retained, including the prominently positioned microbrewery.

“It’s taken a few months to find its legs, but the Crafty Squire is now really motoring,” notes Venue Manager, Joe Baily. “People like the options and we find the various spaces attract different crowds.”

pubs’ fortunes are determined by venue managers. A pub is a pub and as long as its run well it’ll get the sales it deserves.

James Squire might be a brewery but its been a heavy advocate of food when it comes to launching its branded pubs around Australia. The Crafty Squire’s focus on superior pub grub has been welcomed by parma-hungry city customers.

But the food still plays second fiddle to the large range of high-quality beers. There are 80+ taps on site, serving up the full gamut of James Squire favourites. The on-site microbrewery is more than a gimmick in this regard. Rather than simply providing some copper-kettle eye candy, the brewery supplies a ‘Small Batch’ addition to the already extensive beer range. The Small Batch beers aren’t from the usual James Squire menu but explore more, shall we say, experimental territory. For example, while was on site a chewy-looking unfiltered black IPA was being piped directly from a serving tank. Once that’s done, a new brew will be transferred from the fermenter. “We’re a James Squire pub, but Small Batch allows us to refresh our range of beers and keep our regulars guessing, which is a real attraction,” notes Joe Baily.

The Crafty is now a ‘big pub’ on the Melbourne hospitality scene. And as Craig Ellison points out it joins some really quite elite company. “There aren’t many pubs in Melbourne when you think about it,” muses Craig. “At least compared to Sydney, where there’s a pub on every corner.

“Pubs are a long-term investment. Long after that small bar has come and gone, the corner pub will live on. And that also means you have to ride the ups and downs, and not get too spooked by fashion.

“I firmly believe that pubs’ fortunes are determined by venue managers. A pub is a pub and as long as its run well it’ll get the sales it deserves. You might find that competition opens up and hurts you for a period but it should correct itself with the right management. The Imperial Hotel wasn’t doing well and then Joe Baily came along and righted it. Joe’s moved to Crafty Squire and now our current manager Stephen Marrs has taken it to another level. We’ve not changed much, so the only variable is the guy running it.

“Now that we’re with the Dixon Hospitality Group we’re part of a large group of pubs that all complement each other. They’re a good asset to have and I think we’ll see a real resurgence in the pub market. It’s good. Good for us!”

Another regular supplier to the Open Door/Dixon Hospitality Group is Disco Doctors, which spec’ed and installed the Crafty Squire AV.

Disco Doctors relies on a combination of Martin Audio and QSC for the loudspeaker and amplification requirements, complemented by BSS Audio processing with iPad control. The Martin Audio AQ series is the more primo choice for areas that need something more than regulation background music. Martin Audio AQ subs provide the extra welly where required. The versatile and low-profile QSC S52 surfacemount loudspeakers are cost effective and more than adequate for background music. QSC PLD amplification is rock solid reliable.

The TV system is processed though a Resi Linx four-channel HD modulator, providing HD signal to all the Hisense screens and allows easy control via the TV itself — simply tune into the signal with recourse to a Foxtel box. 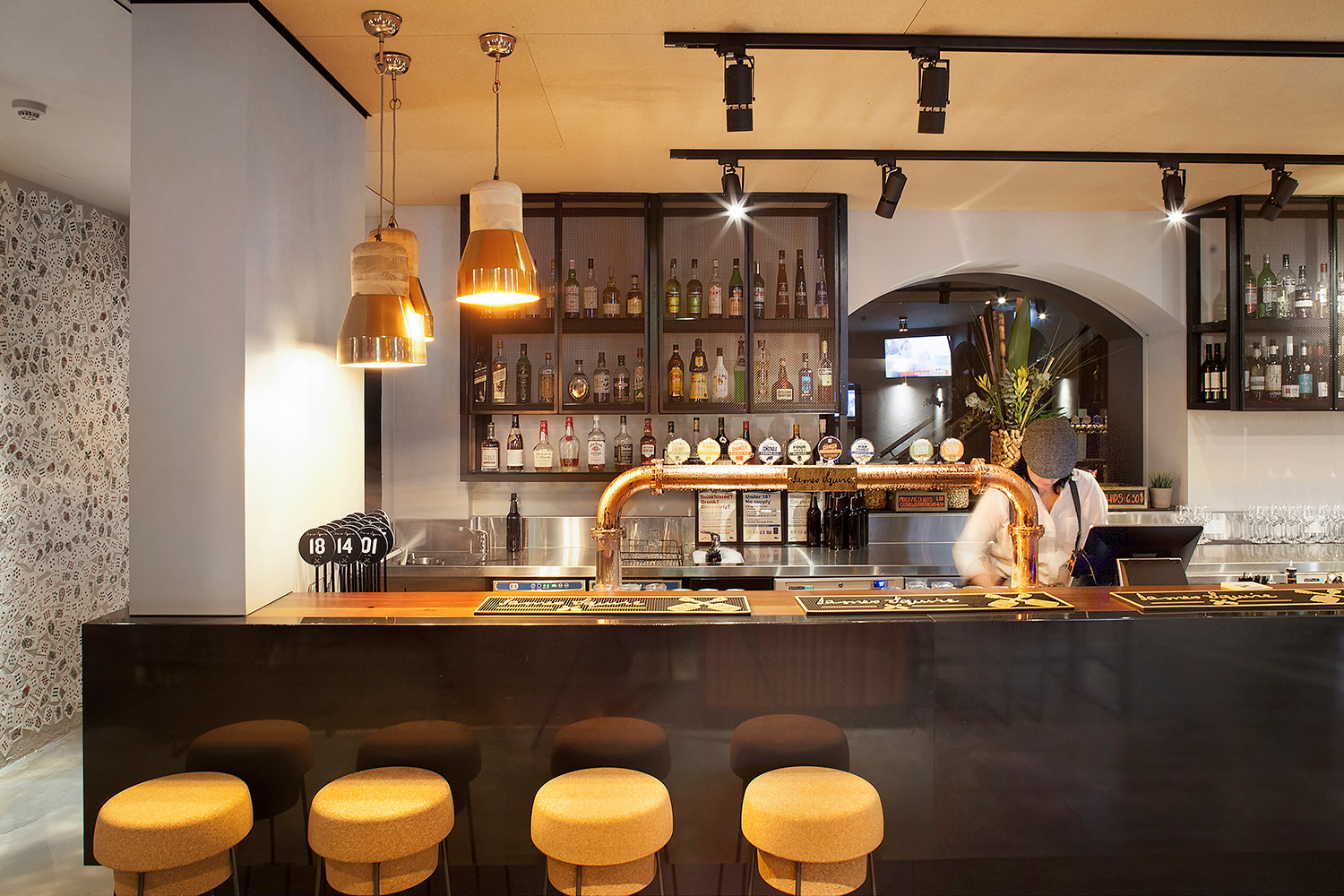 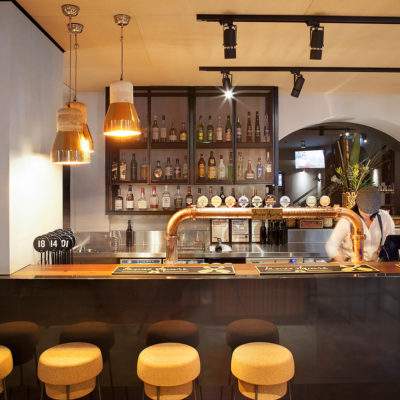 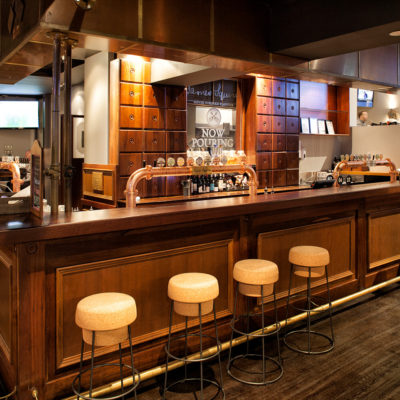 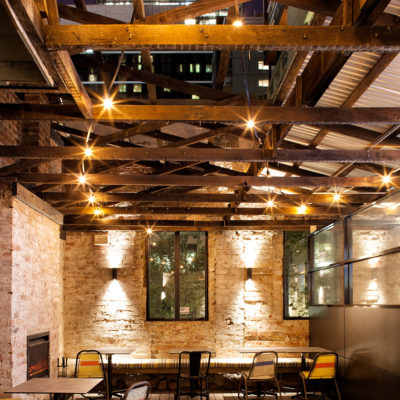 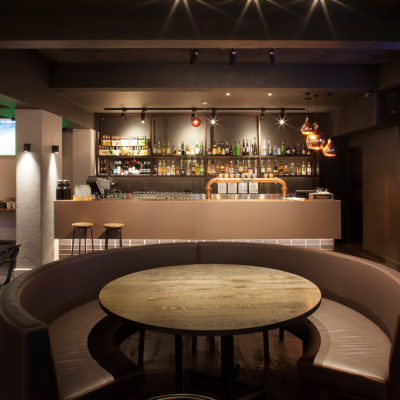 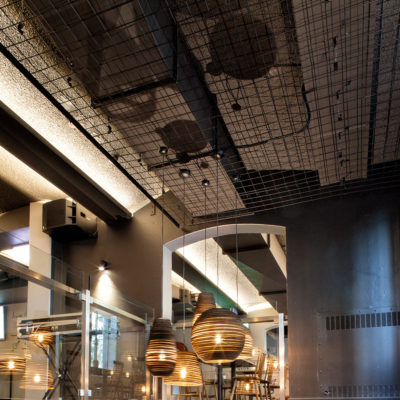 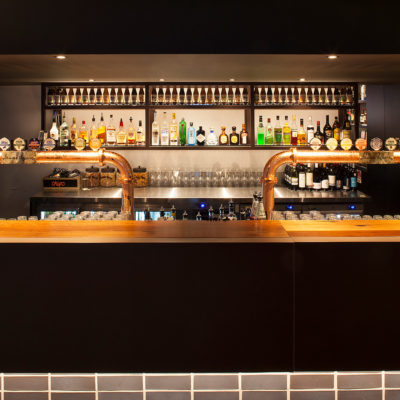 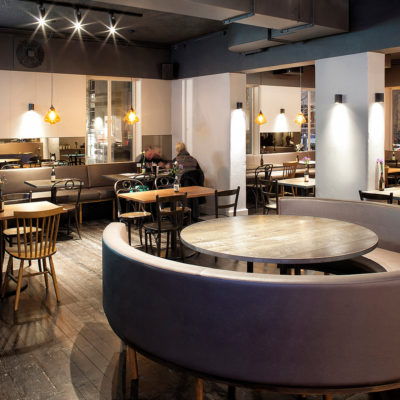 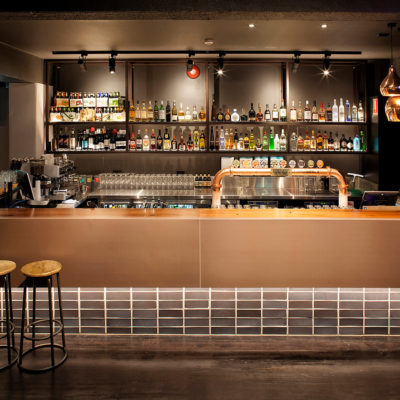 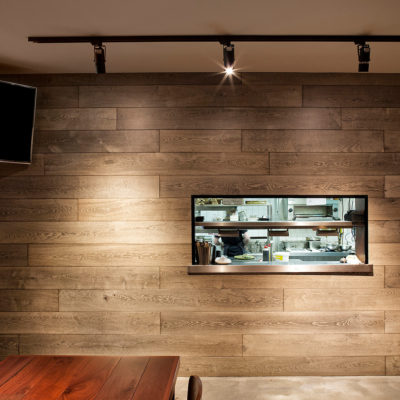 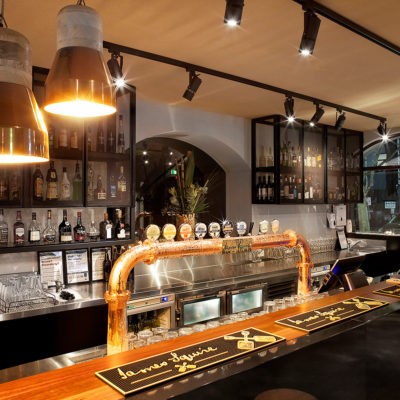 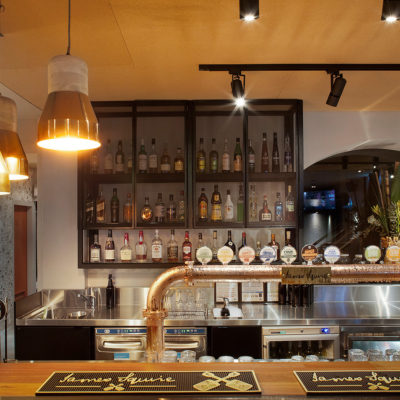 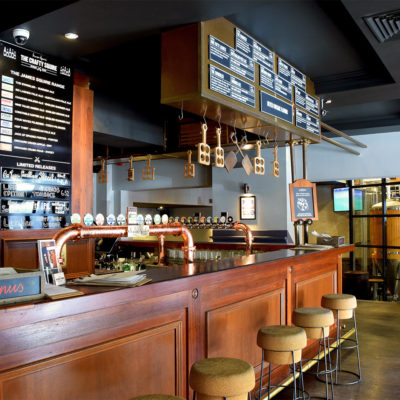 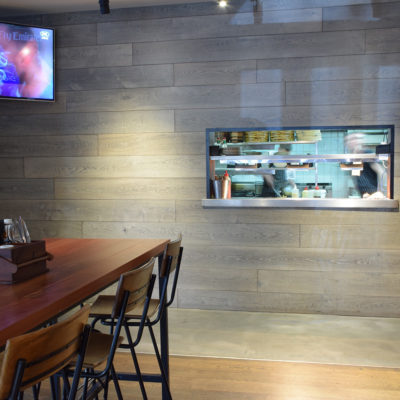 The Crafty Squire required an extensive demolition and new build — the site was gutted back to the brickwork and facade. Without any heritage overlay, Ramvek and Dixon were given carte blanche to get the job done quickly.

“We look at our investment on a square metre basis,” explains Dixon COO Craig Ellison. “We spent about half what we did per square metre on The Duke but we’re very happy with the finish.

“For example, we’re increasingly looking to Ramvek to finish more of the furniture. They did the high bars and the banquettes in the Crafty Squire, which we’re very pleased with.”

Ramvek Project Manager Andrew Shelton and his team had a few curve balls to deal with (some asbestos) and some upstairs surprises to demolish, thanks to a shady ex-tenant (Santa Fe Gold strip club left some pole dancing infrastructure along with some dodgy rooms with cameras and mirrors that had the guys scratching their heads). But overall the build was as routine as one could hope for, Ramvek riding the customary construction gotchas and changes of scope with grace and aplomb. The Crafty was handed over on time, as promised, for the AFL grand final.