The man who introduced the discotheque to Australia keeps getting it right.

Like many great nightclub stories over the years, it all started with Saturday Night Fever.

Back in 1977 Jamie Nasser was in the US when he saw the seminal discotheque movie and was instantly inspired. He would return to Australia and establish the first discotheque in Melbourne — “up until that time, those types of venues in Melbourne were black and unappealing,” recalls Jamie.
He and his business partner at the time went scouting for locations. They found a likely spot in Chapel Street, South Yarra. It was a bouzouki venue that had recently suffered a fire. The owner was determined to rebuild and wasn’t particularly enthusiastic about selling to a couple of likely lads. “He wanted $130,000,” recalls Jamie. “Which we thought was a bit steep.”
They kept looking but grew more focussed on the appeal of the bouzouki bar.
”We eventually got back to him and said we’d take it. We had to beg and borrow the money but we scraped it together.”
The nightclub would be called Chasers — “named after a restaurant in L.A. where movie stars would wine and dine.”
Chasers was never going to be a dark, dingy, black box. It would be colourful and glamorous. When the interior designer told Jamie his club would be predominantly pink throughout, his reaction was philosophical — “well, that’s different to black.”
It was a masterstroke. The nightclub felt attractive and safe. Chasers was an instant hit.
“A year or so later we had Olivia Newton John launch her album, Xanadu, at Chasers. We hosted a live telecast with [Countdown host and music industry guru] Molly Meldrum.”
In 1980, it simply didn’t get any bigger than this. Chasers had hit the international stage.
Jamie Nasser has been opening hospitality venues ever since. Sometimes with high-profile partners, sometimes not, but in every case Jamie was always hands on; pulling the levers; always the operator who knew names, and happy to glad-hand the VIPs.

Diesel Bar is Jamie’s sixteenth venue.
The beautiful heritage bones of the building aren’t new. The structure was preserved from the Melbourne Central development wrecking ball. It was a two-storey retail outlet when Jamie first had a look. He brought in interior designer, Wendy Bergman (Chin Chin, Mr. Miyagi, Taxi Kitchen et al), who fell in love with the site as well. Jamie signed a 20-year lease. He saw the potential and was in it for the long haul.
Diesel has flown under the radar somewhat but has carved out a solid inner-city niche among afterwork professionals, and those wanting a more casual meal and a drink earlier in the night — a staging point before hitting the town. Upstairs is a successful function space. Its central bar, dancefloor, booth seating and shared space for milling and mingling makes Diesel ideal for all manner of gatherings.
“The components of a successful late night venue haven’t really changed over the years,” observes Jamie Nasser. “What’s changed is the way you advertise yourself.”
Diesel Bar is extremely active on social media. Take a look at the Diesel Facebook and Instagram pages and you will see a carefully curated presence that successfully promulgates the face of a classy venue for a mature, discerning patron.
“We’re really leveraging MyGuestlist,” notes Jamie Nasser. “We have 150,000 names there and we send e-flyers, we send birthday offers… It all stems from offering high quality free wi-fi. It’s amazing the detail people are happy to provide in exchange for free wi-fi.”

Jamie Nasser has seen his fair share of booms and busts; instant successes and lines around the block. He’s developed a sense for when to ‘hold ‘em’ and when to ‘fold ‘em’. But regardless of how apparently popular the venture might be, he’s always tinkering under the operational bonnet — trying to get the balance right, as well as introducing something innovative.
“I’ve sold a lot of venues, and many of those are still in operation. I’ve not always sold at the top of the cycle but I’ve not done too badly either.
“If the venue’s formula isn’t quite right, you keep experimenting. It’s often easy to tell if an experiment works. If it does, then buff it up some more. Make it even better. Better DJs, live entertainment…
“Melbourne’s scene is far more crowded and you can’t take anything for granted. In days past you could be virtually guaranteed of a busy opening night. These days, if you don’t market yourself properly you could have an empty venue on your launch night.”

It sounds like an operator’s worst nightmare. And a far cry from the halcyon days when Melbourne was home to a good number of highly regarded nightclubs. Jamie recalls the 1987 launch of the legendary Metro nightclub where he and his partners dropped a whopping $4.2m in the fitout.
“We knew we had done everything humanly possible to make the Metro’s opening night a success. Molly Meldrum scored us a two-hour slot on TV. We made it a black tie event and we booked the most popular band in the country, Crowded House.”
On this night of nights, Jamie had an unexpected assignment: “I was told last minute that Stevie Wonder would be attending the opening night, and I was asked to look after him. I recall that during the night I helped him to the bathroom and he asked if I’d taken him to the dancefloor! He was responding to the fact we’d installed audio in the bathrooms which was probably a first in Melbourne at the time!”

Audio has always played a key role in Jamie Nasser’s venues. Almost from the beginning he’s worked with Sven Langebeck who runs Warehouse Sound Systems in Melbourne.
Sven is a clever chap who prides himself in providing solutions tailored to the venue – “He’s not the cheapest but I keep coming back to him whenever I open a venue,” states Jamie.
When I meet Sven at Diesel Bar he’s already tweaking levels on his audio control app. The app is controlling an Allen&Heath rack mixer, called a Qu-Pac. The product is marketed as a capable live mixer for pubs, churches and other venues. Sven sees it as the best-value 16-in/eight-out installation mixer on the market with a great app that’s just as at home on a tablet as it is on a smartphone.
“It’s powerful and effective and everybody can use it,” enthuses Sven. “It’s suitable for novices of every kind,” he continues, tongue in cheek. He also reckons he’s probably the only person in town using the mixer in this way (not any more! — Ed.).

SCREAMING ON THE INSIDE

The key audio constraint on Diesel is the noise — there are very strict limits on how much sound can escape the venue before the noise police will arrive. Melbourne Central venue management provided strict sound emission demands on Diesel, while half a block away in a downtown apartment live a couple who know the by laws back to front and have a hotline to the EPA. Jamie points to their flat windows from Diesel’s first floor, “the thing is, there’s a nightclub in the basement of their building!”.
Leaving aside the madness of moving into a building with a resident nightclub then going on a litigious campaign of noise outrage, Sven was keenly aware of his job: provide a sound system that would provide clarity, warmth, excitement but would also stay within the confines of the venue.
“The audio system needed to be easy to listen to over the hubbub of conversation,” explains Sven. “That’s not actually ‘background’ music anymore. You need about 90dB of level to be heard over a room full of party goers.
“To keep the overall levels down but maintain some intimacy and excitement we needed to install a distributed audio system — more loudspeakers doing less work… no hot spots or dead spots.
“Secondly, we wanted the room to sound even tonally — a similar balance between highs and lows throughout. “
As an aside, The Metro also had the noise police come knocking some years after launching — more locals were moving into the CBD in the ’90s, and they didn’t take kindly to having masonry falling from the ceiling.
“We were compelled to turn down the main PA from 126dB in the venue to 114dB,” recalls Sven. “Admittedly you could hear the sound system three blocks away!”

Sven chose the comparatively new Bose F1 loudspeaker for the venue. Again, the choice demonstrates Sven’s ability to see through the marketing to determine a product’s suitability. You won’t find the F1 installed in many hospitality venues, as it’s a product primarily pitched as a portable PA option for venues, DJs and bands.
“The Bose F1 lend themselves ideally to the job because they achieve quite high sound volumes without ever sounding harsh. They have a smooth sound and, importantly, a smooth off-axis sound. The F1’s performance meant we were able to achieve a very even soundfield while using only 16 loudspeakers. With other brands we might have to use many more.
“The peak output of the F1 is 110dB, thanks to an onboard 1000W amplifier. We’ve capped the output to 90dB, so there’s plenty of headroom — there’s no audible distortion.
“The venue has five audio zones, so we can tailor the levels according to the need of the function. We can choose from five sources, including a Nightlife music system.
“Mostly, I’ve mounted the F1 horizontally in the ceiling. The F1 has a unique design whereby you can set the curve of the array within the loudspeaker to be flat, a J curve or a C curve. I’ve elected to use a C curve, and achieve a very smooth 100° x 100° sound dispersion as a result.
“I really think the Bose F1 is a radical departure from other loudspeaker designs. The homework by Bose R&D is obvious. There’s a good harmonic balance, matching what you’d expect to hear in your music content. The harmonics in the voice are well balanced, for example, there’s no harshness in one region or accents in another. When we do any EQ to the F1 it’s always minimal and mostly addressing anomalies in the room.
“I’ve been in this business for over 40 years, and I can tell you that the Bose F1 is one of the best general purpose speakers ever designed.”

We were compelled to turn down the main PA from 126dB in the venue to 114dB... Admittedly you could hear the sound system three blocks away! 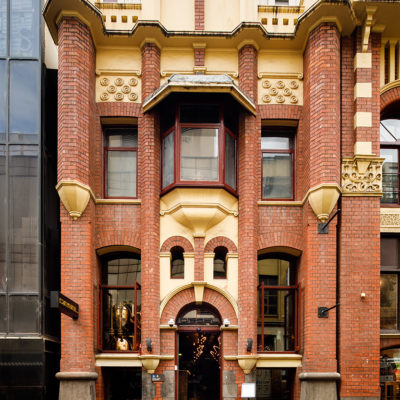 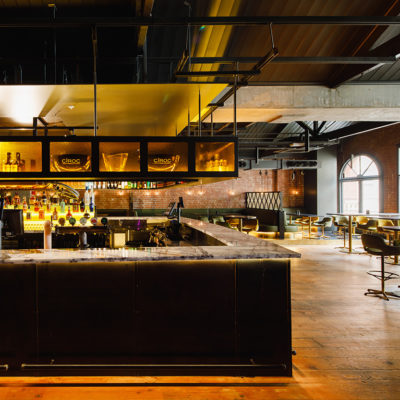 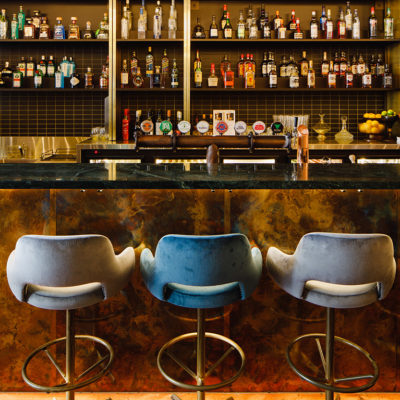 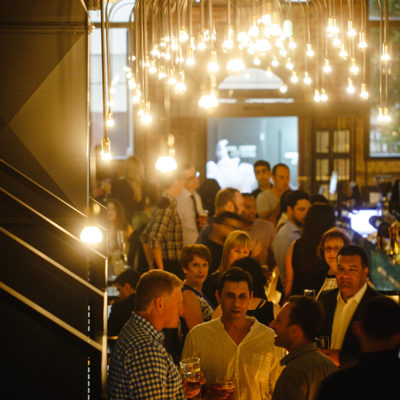 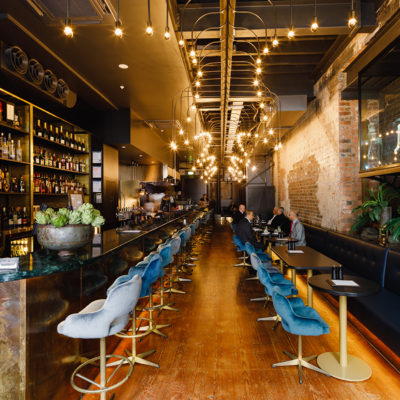 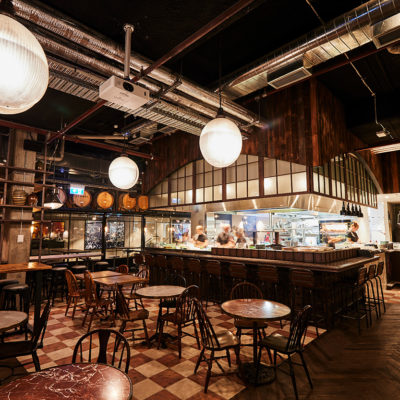 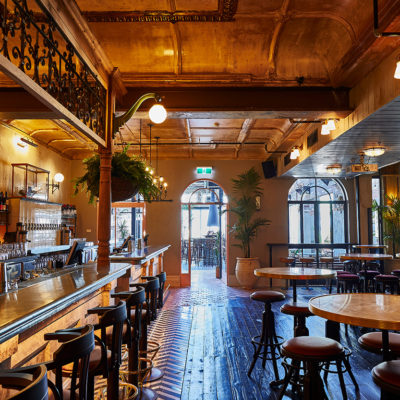 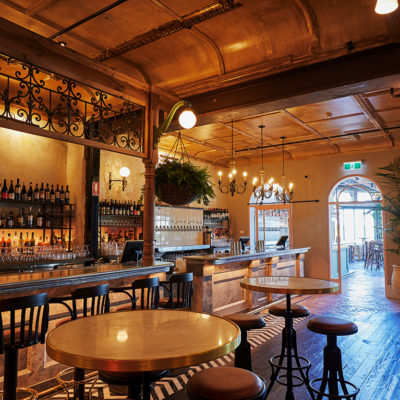