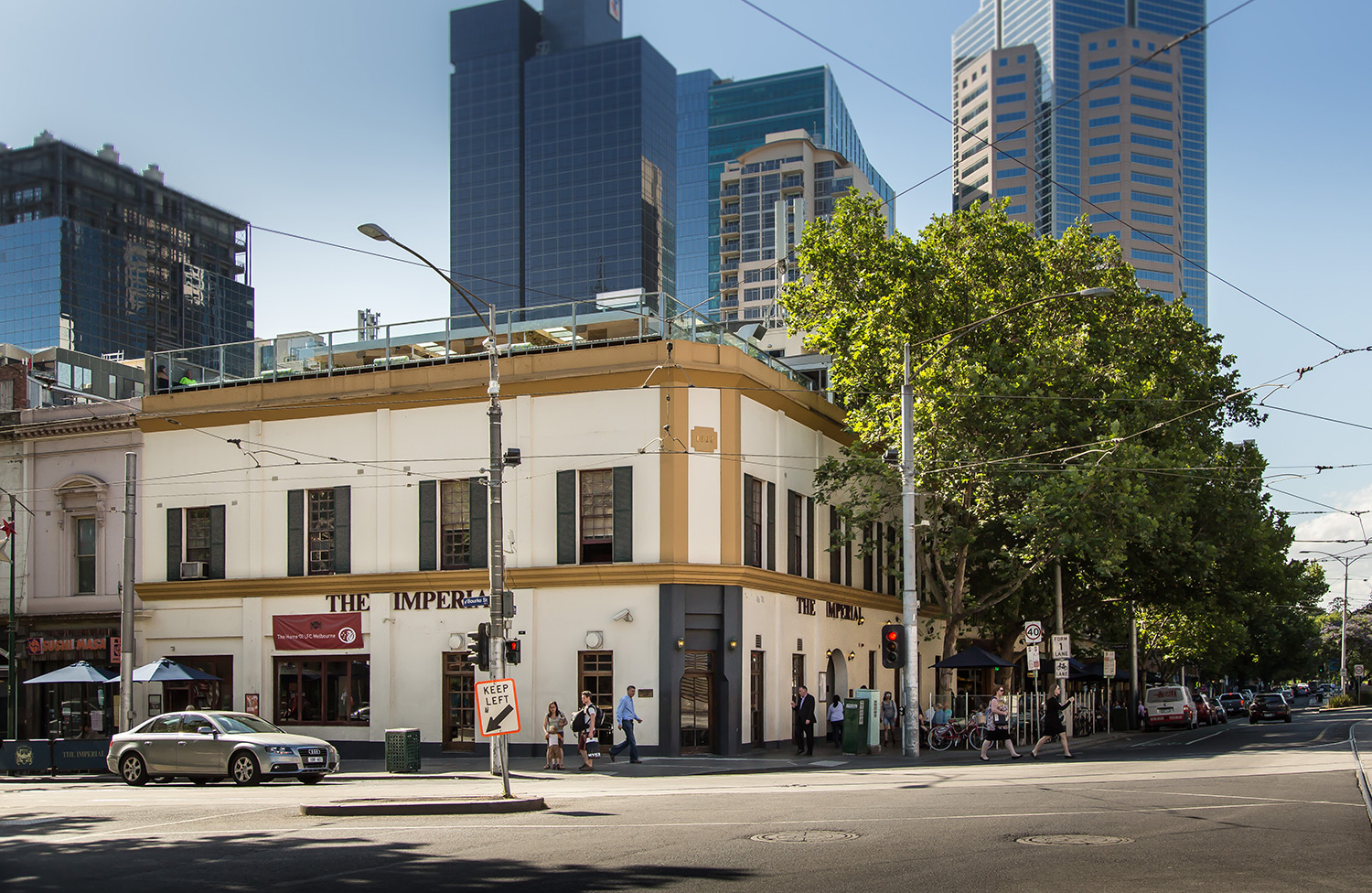 Sports tragics, theatre luvvies and pollies. It’s an eclectic hospitality eco system, certainly not a combination of patrons you’d necessarily target in a ‘back of a beer coaster’ business plan.

Melbourne’s Imperial Hotel stands opposite the state houses of parliament and is a couple of doors down from the Princess Theatre which accounts for a healthy chunk of the patronage. But how did it get such an enviable reputation as a sports lovers’ venue?

As it happens, it was down to the ingenuity of manager Steve Marrs. Steve reached out to some of the fringe sports fans — ie. not the AFL fans. For starters, he’s a Pom (albeit an Australian-based Pom since 2002) so he knew the pain of missing the EPL.

“I offered to open the pub to the Liverpool FC fan club in Melbourne so they could watch a match live at 3am,” recalled Steve.

Group COO, Craig Ellison, also recalls the phone call from Steve suggesting the unusual opening hours: “‘How much is that going to cost me?!’ was my first question. Steve said he’d fly solo and keep the costs to a minimum. So the first game had four supporters, who told four of their friends and on it went.”

It certainly snowballed from there. Without any promotion, other than some word of mouth recommendations between fan clubs, The Imperial Hotel is known by every sports nut in town.

“We’ve got every single broadcast ‘box’ possible in the back room,” notes Craig. “There’s nothing Steve can’t and won’t show. We’ll even log onto a live stream if necessary.”

“Only recently we had a group of Scandinavians asking if we’d open for the broadcast of a downhill skiing competition,” continues Steve. The answer? ‘Yes’, of course. “This job is about relationships, and building those links with the sports fan clubs has been a great investment.”

So is The Imperial a ‘sports bar’ or a pub that takes its sport seriously? Definitely the latter. The day I met Craig and Steve on site coincided with the season opener of the NFL in the US. The front bar had a contingent of 30-odd fans around midday barracking on their teams. But there wasn’t any incongruity or intrusion as a result; patrons in the pub’s dining room happily co-exist with the fanboys. Upstairs a small group of Spring Street bureaucrats were using some of the function space. Later in the evening 100 covers were booked in upstairs (the function space doubles as extra dining), allowing pre-theatre patrons to be one step removed from the front bar if they desire.

It all demonstrates just how flexible the pub now is and how it can allow the unusual eco system to flourish. And we’ve not even touched on the new rooftop bar yet!

For group COO, Craig Ellison, catering equally to the sports nut, pollie or patron of the arts wasn’t his biggest concern; it was ensuring the refurb maintained the solid pub DNA.

“The design challenge was to not lose the pub feel,” observed Craig Ellison. “That was my fear with this refurb. For example, I was deeply worried about the new beer fonts — I’m not now, they’re great — that they might detract from the pub feel.”

The architect was Newline Design’s Jon Mikulich. Jon had worked with the Dixon Group and the builder Ramvek on both the Duke and the Crafty Squire (both featured in venue).

“Jon’s done a good job, I’m impressed,” enthused Craig. “He’s managed to nail it. This refit is nothing like the Crafty or The Duke — I wanted The Imperial to be totally different proposition design-wise — and he’s nailed that as well.”

The first piece of the refurb puzzle was a new rooftop bar. Previously unactivated space, the bar now attracts yet another demographic to The Imperial — young ladies. The area is entirely non-smoking, comfortable and not overbearingly blokey in design.

“I was all set to put a large-screen TV up there,” recalls Craig Ellison. “It was Steve Marrs who convinced me not to. The screen was ordered and paid up but we cancelled it and it was the best thing we did. Even when the rest of the pub was a worksite we’d have groups of ladies, dressed to the nines, filing their way up the elevator to head to the rooftop. It’s been a revelation.”

The rooftop bar was a hit the day it opened. Manager Steve Marrs explains: “I don’t know how many tens of thousands of office workers can look down and see our rooftop bar, but they were all tracking its progress. When it opened we were instantly full.”

Bromic gas heaters take the edge off the cool of the Melbourne evenings while soon-to-be installed awnings will provide some relief from the brutal mid Summer sun.

“Heat and cold aren’t an issue for Melburnians,” observes Steve Marrs. “People will sit out regardless. It’s the rain that brings people back indoors.”

The rooftop also proved to be a godsend for Ramvek during the construction phase. Project Manager, Adrian Savage, picks up on the story: “This was by far the most difficult build of the three recent Dixon jobs [The Duke and the Crafty Squire being the others]: For starters, it’s a rebuild rather than a refit — including adding a whole new level in the rooftop; the pub had to keep trading throughout; and there were some very limiting access issues — it’s on a busy corner site with power lines… including tram line power, everywhere.

“Quite often we used the rooftop to supply materials for the refit — using a crane to drop a week’s worth of supplies. The issue was we only had a short window of time on a Saturday morning for the crane to make the dropoff. If it was raining or if the wind had picked up, we could lose our window of opportunity and be a week behind schedule.”

Fortunately the weather was kind to Ramvek and the construction kept motoring, allowing them to meet a tight deadline.

“I really applied the thumb screws to Ramvek on this one,” recalls Craig Ellison. “The deadline was very tight — too tight in retrospect. Ask any other builder and they just wouldn’t believe what Ramvek was able to achieve in that time. And it simply wouldn’t have been possible unless the builder was totally onboard and the contractors as well. It’s the most challenging reno we’ve done yet and Ramvek rose to the challenge.”

BACK IN THE SWING

The Imperial is a pub in the most traditional sense of the word. Pubs cut through the accepted hospitality delineations of age, gender and occupation — a good pub is for everyone.

“We’re budgeting on a sizeable increase in trade here at The Imperial,” says Craig Ellison. “And we’re expecting that because, thanks to the rooftop, we’ve increased the pub’s capacity, and we’re allowing the pub to get on with being a pub with improvements to the bars and kitchen. There are pub fundamentals, and by getting those right you’ll reap the rewards — simple is best but do it well.” 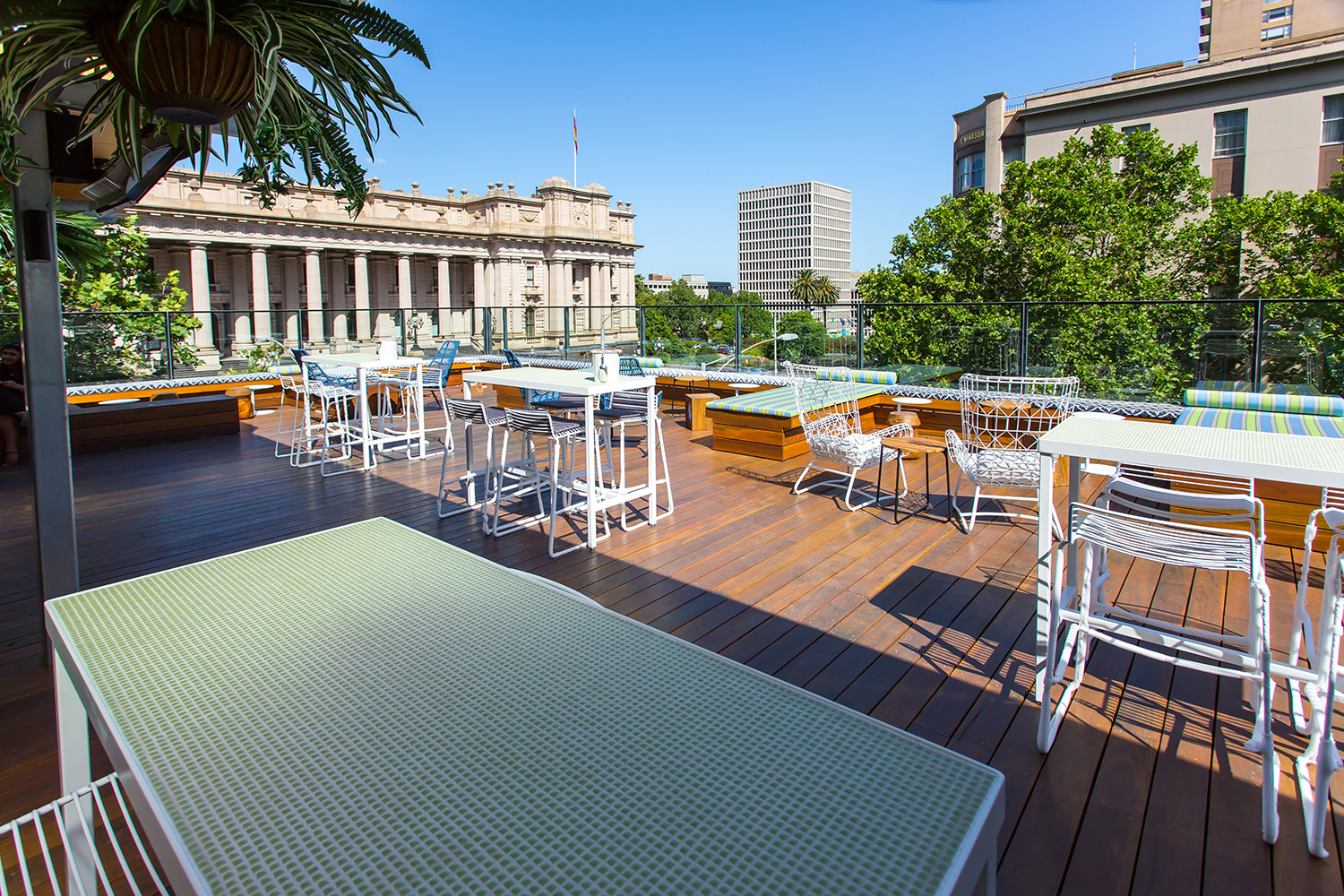 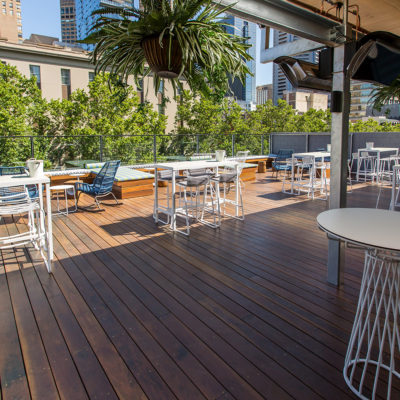 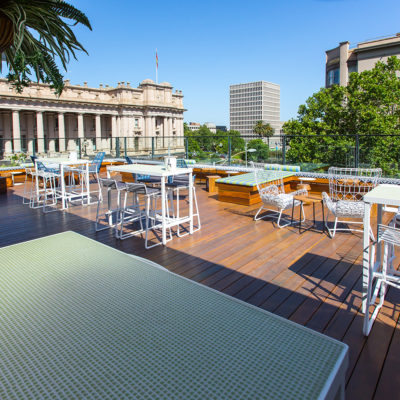 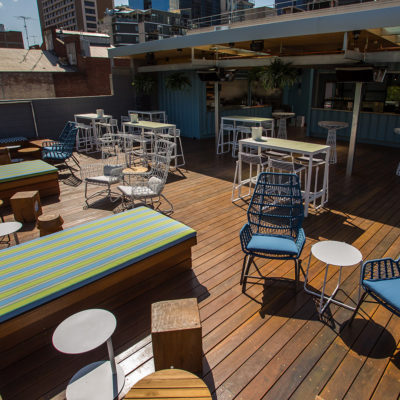 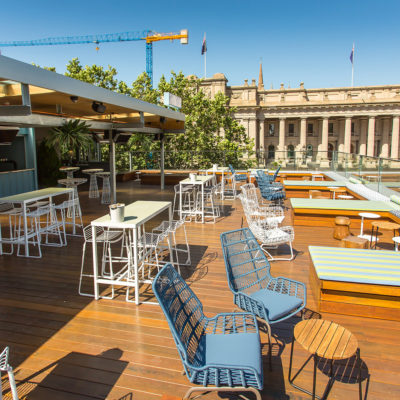 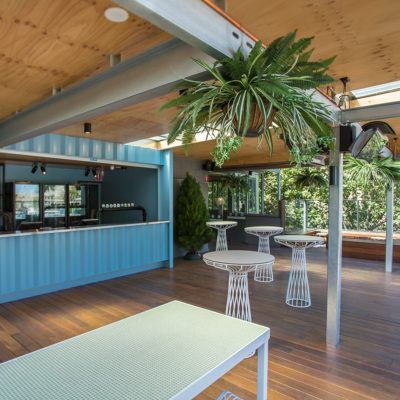 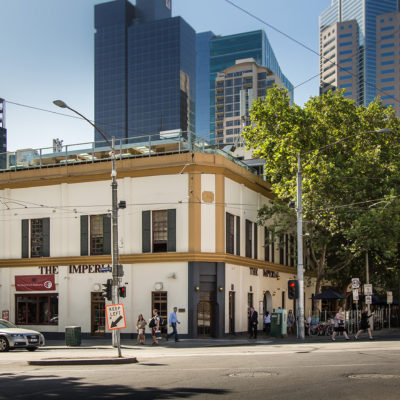 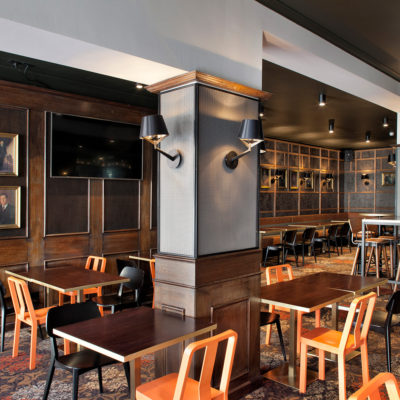 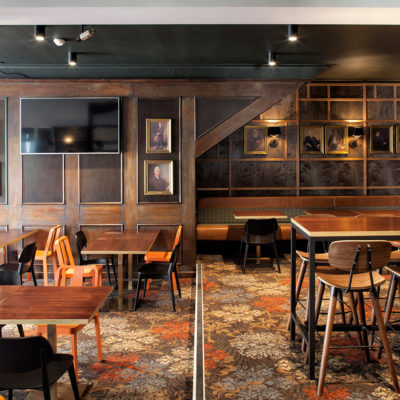 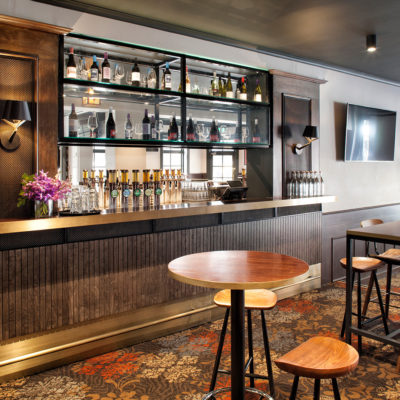 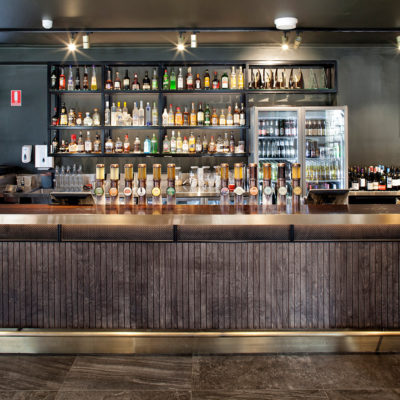 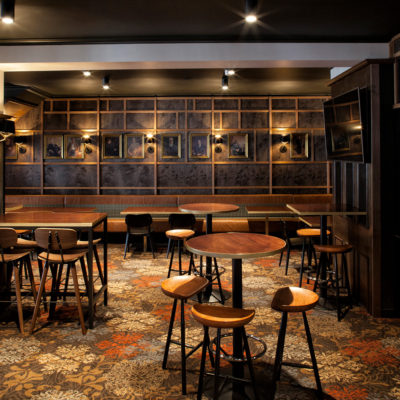 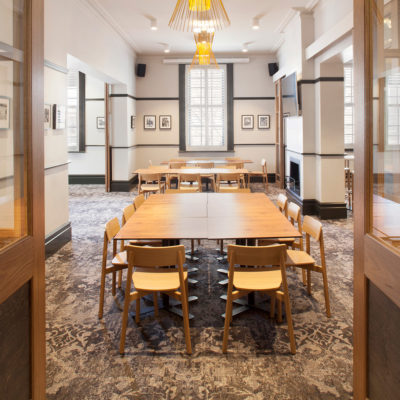 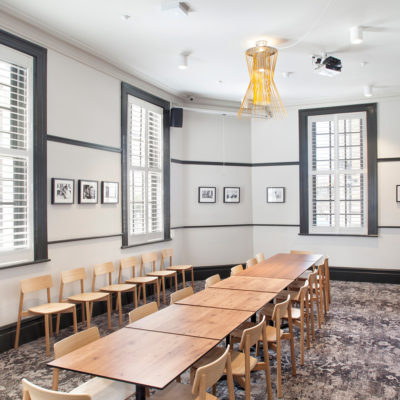 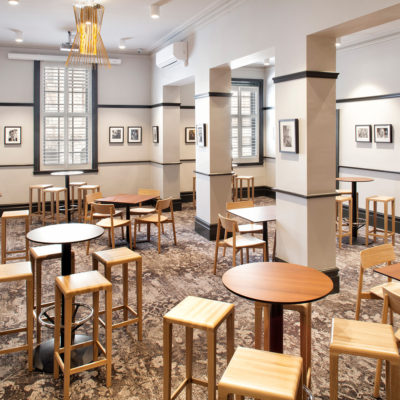 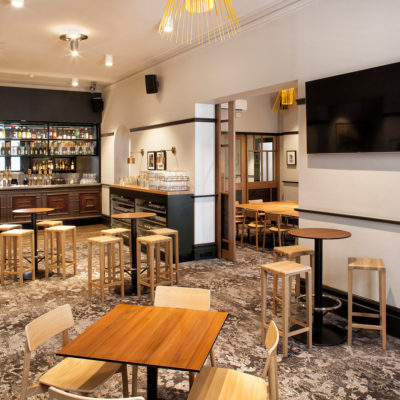 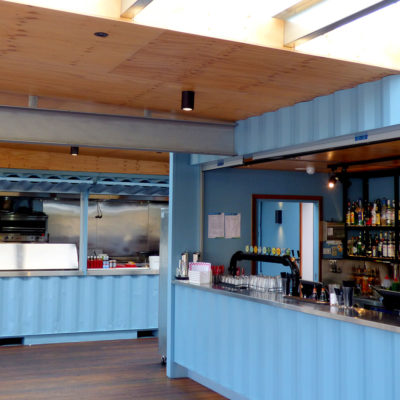