Blown Out of the Water

Harbord Diggers is the biggest story in club land and possibly all of Australian hospitality.

The new Diggers represents a total rebirth. I use the word ‘rebirth’ advisedly. The new Harbord Diggers might be utterly unrecognisable but the 90-year-old club’s DNA is retained. Club CEO, Dale Hunt explains:
“Harbord Diggers was established by six young blokes who had returned from WWI. They’d left plenty of mates behind at Gallipoli and the fields of Flanders. When they returned, they determined that they’d make their mates’ sacrifice mean something. They began raising money by selling boiled water to beach goers at Freshwater. Every half penny they raised, they threw into a bucket which they’d then leave anonymously at the door of a mate’s widow. From those humble beginnings they started Diggers:
“That’s the Diggers legacy we simply couldn’t lose in the redevelopment.”

WRITING ON THE WALL

Everyone knew the old Harbord Diggers was being left behind. At one point, with the writing was on the wall, the club submitted a development application for 16 townhouses on the site. The Freshwater locals made it clear they weren’t in favour.
In retrospect, it wasn’t that the locals weren’t in favour of development, per se, but they wanted a development that benefitted the community and not just 16 investors.
The club went back to the drawing board. But rather than being less ambitious they did quite the opposite — a grand plan.
The new Harbord Diggers squeezes way more onto the headland parcel of land than any condo developer could ever dream of.
The site now plays host to what’s described as an intergenerational village. Some 96 retirement apartments are now on site. These are joined by an Ocean Terrace alfresco wining and dining area, bars, lounges, restaurants, café and kitchens, a children’s play area, a gaming floor, community spaces, a fitness and aquatic space, and administration centre.
“When clubs were first created it was about sharing a beer, feeding a few coins into the poker machines, and some live music or entertainment. Some 50 or 60 years later the communities around us have changed — they want different things nowadays.”

How does Dale know the community wanted something different? He asked them. Apparently, there’s only 9000 people in Freshwater and he reckons each one of them had a chance to have their say.
“When we proposed the 16 townhouses and to move the club, we had 6000 letters of complaint to council. They said it would be an overdevelopment. We went back to council, after asking the community what they wanted, with a proposal for 96 apartments, a new club, a fitness centre, four restaurants, two cafes, child care, an aquatic centre, gymnasium, beauty salon, hairdresser and everything else… The result? More than 10,000 letters to council and only six in opposition to the proposal.”
Clearly the club was onto something. It was a bold plan; but at least with the community behind it, Dale knew they stood a chance.
Dale describes himself as an “ordinary bloke” and not some kind of high-flying corporate hot shot. But for an ordinary bloke riding shotgun on a $200m project he had a sense of destiny. He aimed high.
“I was determined I would hire the best architects in the world. So I went and got Mark Curzon (now Director of Fender Katsalidis). Here’s a guy who’s done the Parramatta tower, 1 Bligh Street in Sydney and created award-winning buildings all over the world. Next, I found Tai Ropiha from CHROFI. He won Architect of the Decade for what he did in New York. I wanted both of them, but no one told me you couldn’t make two architects from different firms work together. So we convinced them to create a partnership… just for this project. And then we found out they both live within 500 metres of the club! The structural engineers: we went and found the guys that rebuilt the World Trade Centre. I subsequently found out he lived about three kilometres from the club. It was like it was all meant to be!”
It was like the new Harbord Diggers was building a community even before the architectural plans were complete. And ‘community’ continued to be the watchword… almost like those six young diggers, fresh from the trenches of Europe were sitting at the table.
“We knew we had to create a community gathering place. Like a lot of suburbs, our community had grown older, but even if you’d lived your entire life in Freshwater there was nowhere to retire. Which we thought was so wrong. So a retirement offering became part of the development. And then we were talking about food and beverage. Clubs traditionally had done low-cost food but that’s not what our community wanted. Cost wasn’t the sticking point; it was value for money they wanted. So I went down the road to talk to Pilu — who owns and runs the ‘Best Italian Restaurant’ in Australia. You can imagine his initial reaction when I told him I wanted him to open a restaurant in our club. He nearly fell over.”

Ah, yes, the F&B. It’s utterly first class.
There’s an internal thoroughfare within Diggers dedicated to food. ‘Eat street’ consists of a variety of restaurants with their own internal and external access.
One of those restaurants is, indeed, AcquaFresca by Pilu — a casual Italian trattoria by renowned Italian Chef, Giovanni Pilu and his team from Freshwater.
“He could see the club’s vision and wanted to be a part of it. Then you add in Teddy Larkin’s Seafood and Steakhouse, add in the Main Bar, the DD Collective cafe and you’ve got a solid F&B offering. But more importantly in that mix you’ve got the childcare centre. The childcare centre has an ‘Adopt a Nanna’ program and we added in the aquatic centre so the children get to learn how to swim. Then we added a fitness centre representative of the active lifestyle shared across the Northern Beaches”.
Dale could envisage a community hub for grandparent, parents and kids all to have a place at Harbord Diggers — and the F&B options are venues for those ‘garden fence’ interactions to occur.

Building a ‘community with a broad portfolio of offerings for an intergenerational clientele’ almost rolls off the tongue in 2019. But back in 2009 when Dale and (then CEO) Greg Pickering decided they needed to ‘blow up’ Diggers and start again, inviting other operators in on your patch was almost unheard of… even The Star hadn’t really come to that realisation.
“I think that was the hardest thing I had to do during this entire project. It wasn’t the financial aspects; the hardest thing I had to do was recognise that other people could do things better than me.
“If I wanted to have the best venue in NSW I had to get the best people. So we simply went and found the best people in every field. Which was the nature of my conversation with Giovanni Pilu: ‘I want an Italian restaurant in the club. I want you, because you’re the best. But you can’t charge what you normally charge because we’re still a club!’ It was a challenge for both of us. But now, I can’t walk past Pilu’s venue without seeing it fully booked.
“Teddy Larkin’s the same: We are now the biggest, most successful club in Australia but I don’t run my own main bar at Harbord Diggers, that job is contracted to the management of the Manly Wharf Bar because he’s a better bar operator than I am.
“As an old-school clubs bloke that’s a bitter pill to swallow! But it’s proven to be the right decision.”
Fun fact: in six hours during ANZAC Day 2018, Diggers did $150,000 worth of beer sales.

Dale might have delegated his bar operations but he retains the staff. In fact, he retained the staff all the way through the building process.
Dale Hunt: “We made some mistakes during the redevelopment. One was my determination to keep the club open the whole while.
“At one stage we had a huge Caterpillar D11 bulldozer operating 500 millimetres away from our customers and staff. It got to the stage where the beer was shaking out of people’s hands. We had to close. There was no choice. Saying that I wanted to keep our full-time staff on, which we did for a full 12 months. We paid their wages and they went and worked on local community projects and the like. It was the right thing to do. You give back, you send the elevator back down. I could have made more money if we hadn’t. It’s not all about the money. The money comes if you do things right.”

It’s been a long time coming. And it’s changed a lot of things that we took for granted about licensed club operations. But the Harbord Diggers has arrived and it’s going gangbusters.
Dale Hunt: “Of course I made my forward projections but they’ve all been blown out of the water. It’s phenomenal. It’s exceeded every expectation.
“Prior to closing down for renovations we had 20,000 members. Now we have 58,000 and growing, and what’s even more amazing is the fact we have more female members than male.
“All the F&B outlets are thriving. We charge commercial rent on the restaurants plus we get a percentage rent of the upside — when volumes reach a certain threshold and go up we share in that success. The beauty of it is every one of those outlets have exceeded expectations and are doing phenomenally well.” 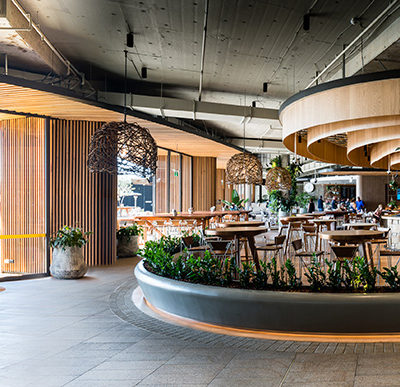 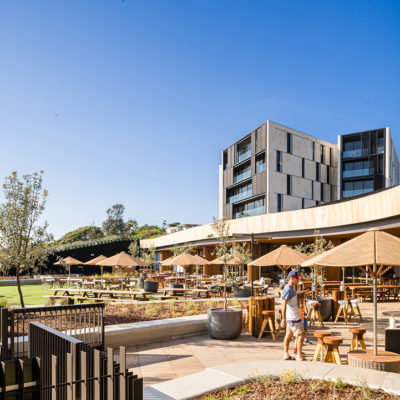 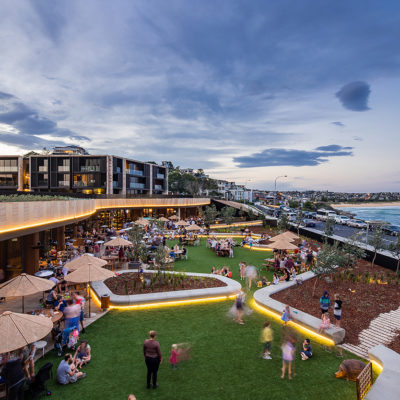 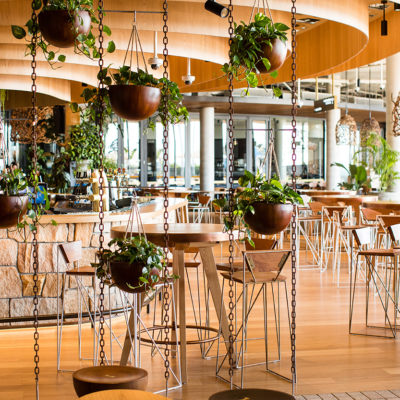 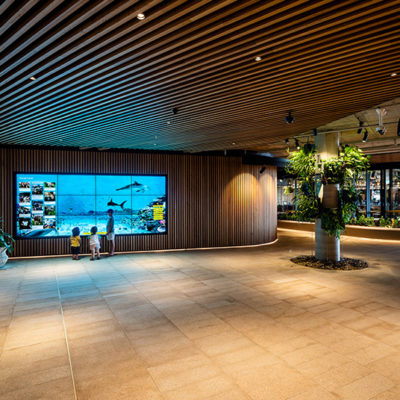 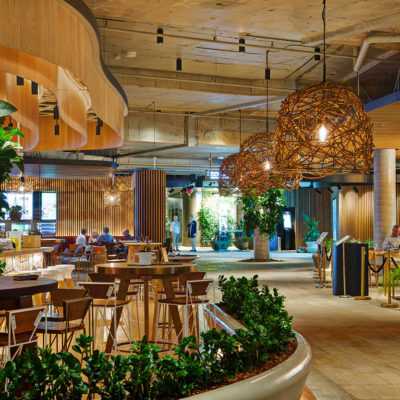 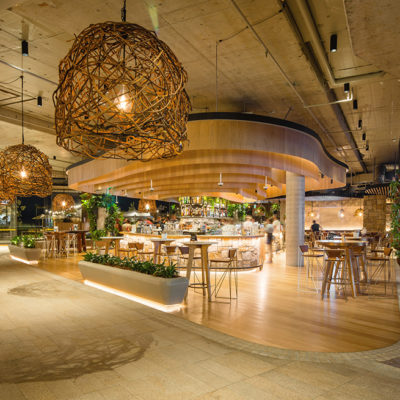 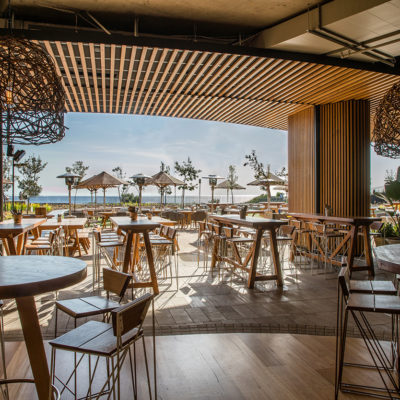 in six hours during ANZAC Day, Diggers did $150,000 worth of beer sales

The subterranean site defines a majestic, single-aspect view across the ocean, a panorama that Fender Katsalidis sought to optimise framed views from within. Fender Katsalidis director Mark Curzon: “We have used local materials indigenous to the headland, these natural elements connect the ocean and headland deep into the club. “A fully-operable glass façade provides the opportunity to seamlessly connect the inside and outside, allowing the north east breezes to flow into the space. “The views are multifaceted with those outside on the Ocean Terrace able to look inside at the warm tones of the cave-like interior and those inside enjoying the vibrant ocean as a contrast.”