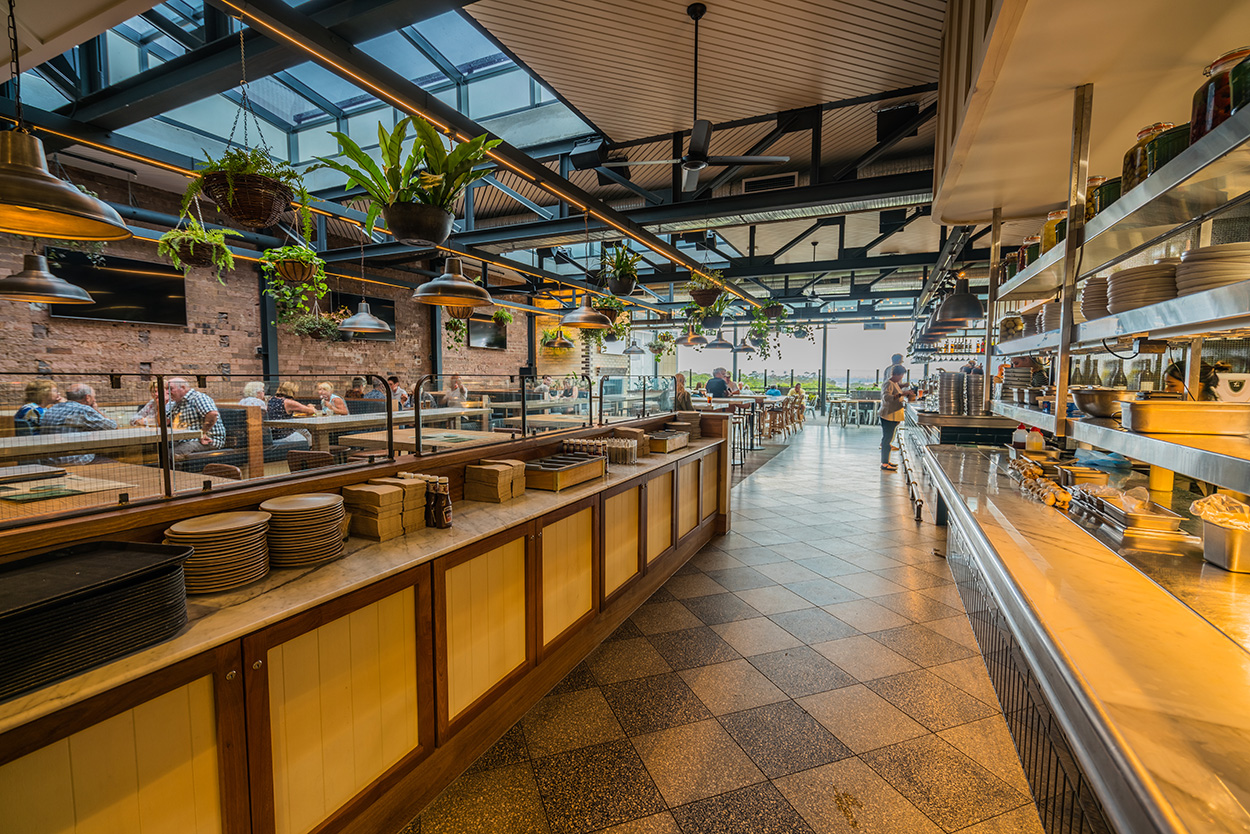 This ‘vertical pub’ in the ’burbs is a cut above.

84 tradies on site… at the one time.
Them’s a lot of utes!
The Highfield Hotel came together in a
hurry. Once the Go button had been pressed, after all the approvals came through early 2017, the Feros Group poured more than $10m into the build over the course of seven months.
The deadline was ‘before Christmas’ and Director, Chris Feros, stayed strong, cracking the whip – ‘let’s get this done’.
It required a monumental group effort. Back in February 2017, pigeons were flying through the top level and there were gaping holes in the Level 1 timber floors of the old Bizzo’s Club. On December 15 the whole venue, including a ground floor ‘ultimate’ sports bar, first floor bistro and bar, and best-of-breed gaming lounge were all open to the public. No soft opening; it was pedal to the metal from Day 1.
Leading the contractor charge was H&E Architects, and New England Constructions. In the month prior to the December opening it was an around-the-clock work site.
Not only that but New England Construction was able to keep the existing Feros Group venues open in the basement — Huxley’s and the takeaway pizza restaurant, Ugly Pizza. Feros Group factored in 20 days of lost trade, there wasn’t a single day of down time.

Highfield Hotel is the Feros Group’s new flagship. The Feros Group, helmed by father and son team, Nick and Chris Feros, are suburban pub operators. In fact, the group has three of its pubs all within 15 minutes drive of the Caringbah-based Highfield Hotel in Sydney’s Sutherland shire.
The Feros Group is well known for operating family-friendly pubs with ‘cut above’ food offerings. Highfield was going to be a bit of a departure:
“If I showed you all the different draft plans for Highfield’s upstairs space you’d be amazed. We were looking at plans for a full-blown a la carte restaurant, a cigar bar…” recalls Chris Feros. “Then we took a long, honest look in the mirror and asked ourselves some key questions: ‘Are we heading into new territory?’, ‘Are we ready for that?’, and ‘Can we be certain of delivering a high quality product?’
“As we answered those questions we decided not to stray too far from our core strengths — great pub fundamentals — but take that offering up another couple of notches.”
After examining Chris Feros’s motivations, it’s clear the group wasn’t entertaining the idea of a cigar bar or table service because they were sick of the traditional pub paradigm or outgrown their Wednesday parma patrons.
“It’s hard to find a pub in Sydney that now doesn’t do food well,” observes Chris Feros. “You can’t differentiate yourself by having a competent food offering. You need to go further.
“Ten years ago, I’d never dreamt that my competition would be the Westfield rooftop at Miranda shopping centre. You’ve got the likes of Grill’d and a cinema complex. They’re getting it right.
“My competition isn’t the pub down the road it’s for the hospitality dollar. As a hospitality group, in fact, as an industry, we have to be evolving to stay ahead of the game.”
The Botanical rooftop bistro has raised the pub-grub bar. The menu continues to offer solid value but perhaps the portion sizes are scaled back a little in favour of options and quality. You can even make a meat selection for the authentic Japanese robata grill. It’s also a venue where patrons are happy to drop $14 on a properly prepared cocktail.

Chris Feros is adamant. He’s no longer designing suburban pubs for a specific demographic. This is interesting given how much of the Feros success has been in providing family-friendly pub environments, complete with playgrounds.
Highfield Hotel is family friendly but doesn’t have that same kids’ focus as, say, The Prince or Taren Point Hotel. What it does have is a bunch of different experiences.
“I don’t talk about clientele, I talk about experiences,” emphasis Chris Feros. “When people talk about demographics, I say, let’s not talk about demographics, let’s talk about experiences. What experiences can you have under this one roof? I could target a 30-something bloke as the demographic for the sports bar, but he might meet his wife downstairs in Huxley’s afterwards or for a cocktail upstairs in the Botanical. So how do you isolate the demographic in that case? It’s more about the experience you’re delivering.”
This goes a way to explaining and understanding the success of the Highfield Hotel in its suburban context. It’s been immediately adopted by the Shire with great enthusiasm.
CHRISTMAS BAPTISM
When you sit on the deck of the Botanical bistro, looking across Botany Bay at the city of Sydney, cocktail in hand, Bromic gas heating keeping you comfortably toasty on a clear Autumn day, it’s easy to think that this hospitality game is actually pretty easy. Build it and they will come.
Wrong. It takes rare foresight and a lot of guts. Something project manager Ben Shaw is all too aware of: “For Chris Feros to see the possibilities of this site five years ago was amazing. The building was in a real state. Upstairs, it felt like it was only the pigeon poo keeping it together. And to strike the deal with the landlord, spend millions of dollars on a building you don’t even own… well, its success is obvious to everyone now, but I can tell you it wasn’t back then.”
Ben Shaw, is also well placed to provide perspective on the enormity of the completed task: “It was an extraordinary effort by all. This was a complex build. We were ripping roofs off, replacing roofs; we were at times demolishing part of the building and not yet knowing what was being built in its place…
“In that last final month leading up to the December 15 opening, I reckon we had about two and half months of work to complete in around four weeks.
“New England Constructions had all its site team and it’s management team on the ground getting the work done. It was mayhem. Contractors were climbing over each other to get things done.
“It wasn’t a perfect situation but we were
able to open before Christmas. And I’m not sure there would be many other builders able to achieve that.”

The AV experience in the Highfield Hotel’s sports bar is certainly elite level. Dominating the room are four giant 3x3 video LG Commercial walls. DJW Projects undertook all the audiovisual work. Helmed by Dave Coxon, DJW bravely jumped into largely uncharted territory – using a video over IP system to give the video walls the advanced capabilities they needed.
Traditionally, achieving multiview functionality (where you can select a number of different sources in a bunch of different configurations on the one display canvas) requires serious hardware grunt. It’s now become possible to achieve the same sort of advanced functionality using software and off-the-shelf network switches.
DJW Projects used a system called Octava, which allows the hotel staff to choose the sources and the screen configuration from an iPad. The interface is elegant and belies the sheer quantity of data throughput required to have multiple streams of HD content being displayed on a single video wall.
“With a sports bar, each source really needs to be displayed in full HD,” commented DJW Projects director Dave Coxon. “Which means you need a mind boggling amount of bandwidth to achieve the sort of multiview functionality required, as much as 800Mb/s per stream on the back plane switch. So we learnt that the quality of the switch determined the quality of the vision. We used 60Gb Cisco switches.
“The Cisco switches aren’t easy to configure, but once configured, they’re very stable.
“The other key thing we learnt was you need to preserve the frame rate of the source video. You can’t skimp on that. Things will get glitchy otherwise.”
There are some 200 displays throughout the venue. Apart from the 36 within the video walls, the other screens are sent video via a more traditional RF MATV system.
“We discovered that if we wanted to send hi-def IP video to every display in the hotel, the network switches would be hundreds of thousands of dollars each, so that was out of the question.”
The audio system is based on Acoustic Technologies loudspeakers, EAW SB120 subs, Powersoft QC1204 and 2404 multichannel amplifiers and Symetrix processing. All the audio routing is via Dante IP audio over Cisco SD350 series managed switches — again, ensuring the correct audio matching the selected video source can be heard in the right zone.
“It’s a background music system and we were looking for a more cost effective option as a result,” explains Dave Coxon. “Acoustic Technologies worked with us on a specific model for the Highfield Hotel. A full-range, low-profile, loudspeaker that performs really well at the right price.” 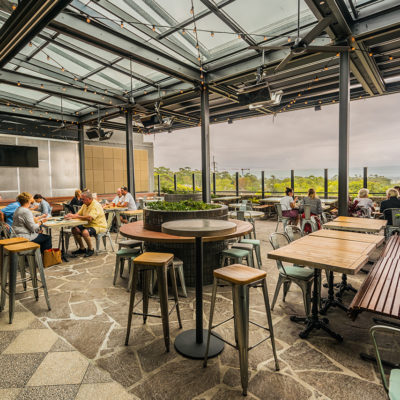 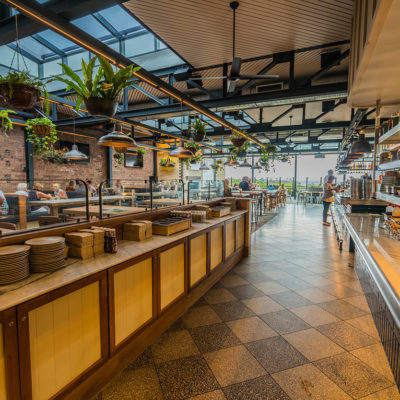 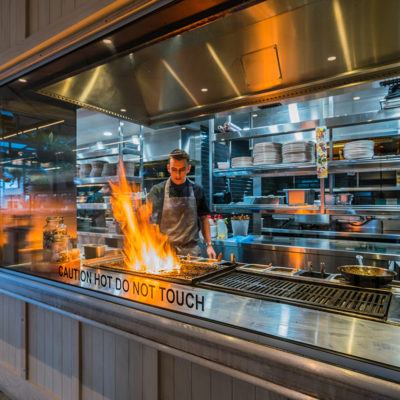 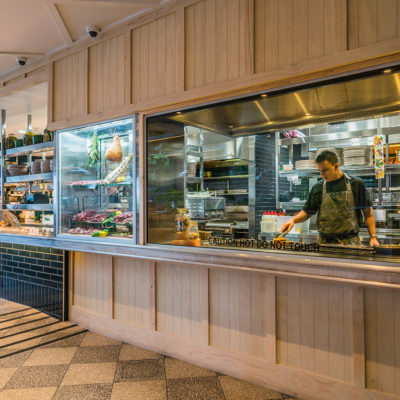 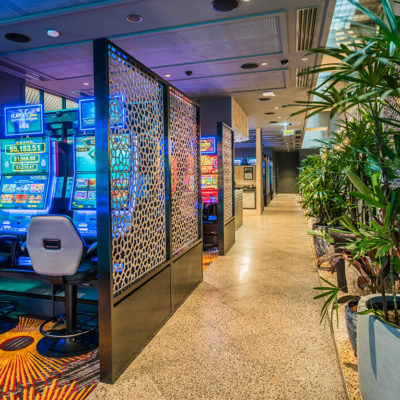 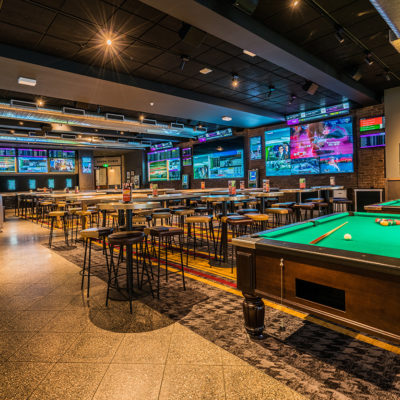 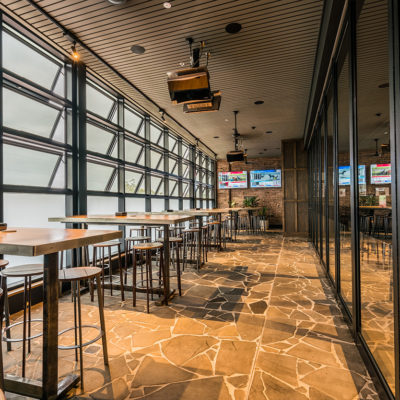 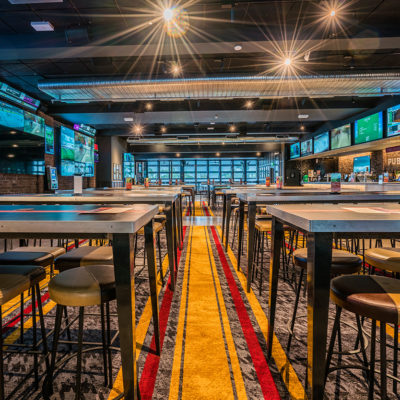 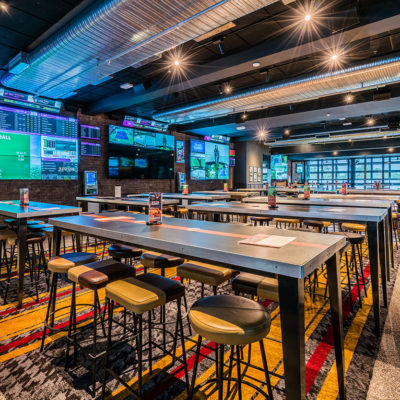 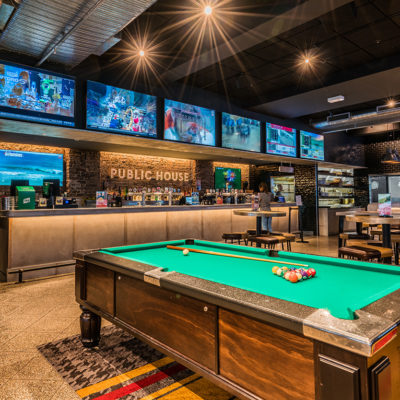 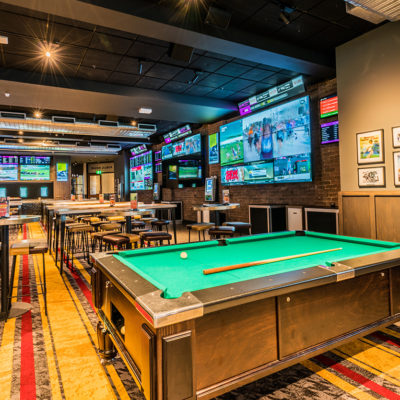 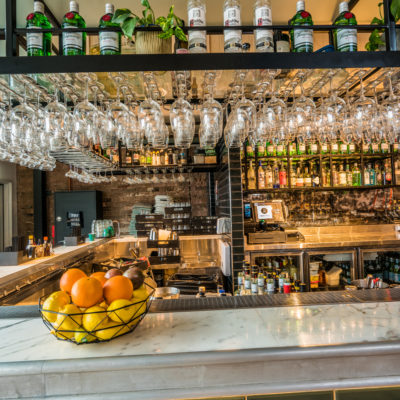 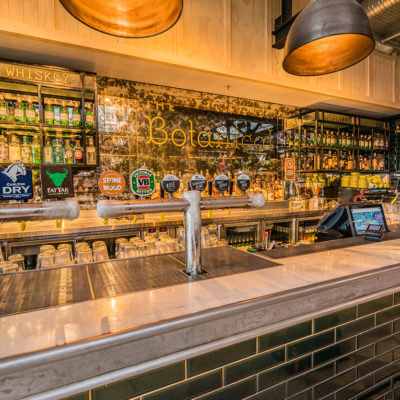 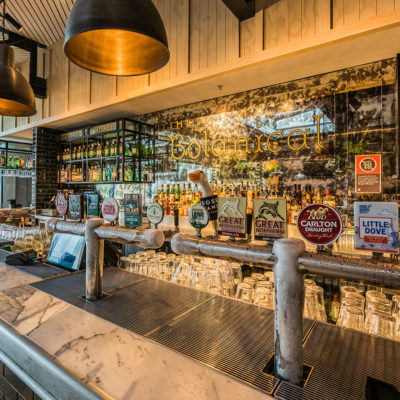 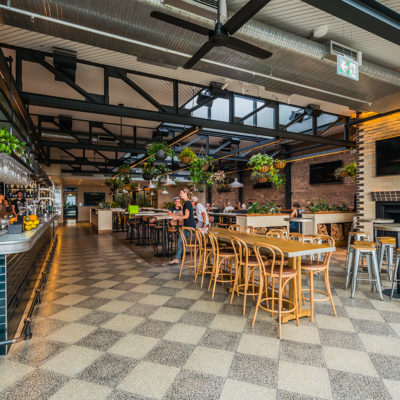 "Feros Group factored in 20 days of lost trade, there wasn’t a single day of down time".