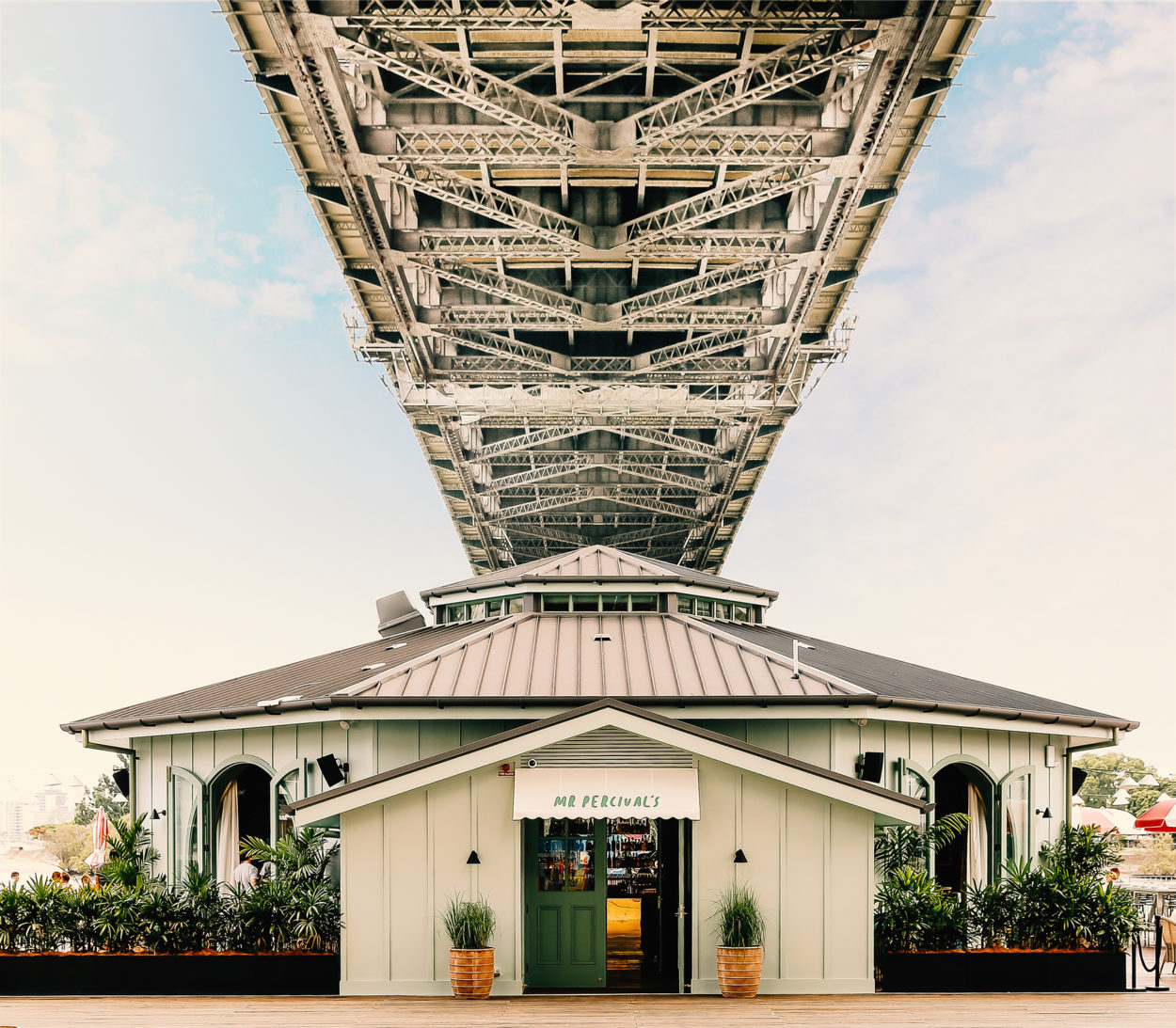 The Howard Smith Wharves have been utterly transformed into a multi-venue F&B cornucopia for all.

It’s a pleasant, sunny day when I step into the Howard Smith Wharves precinct in Brisbane. As far as location goes, where I’m standing is a property developer’s dream. It’s hard to believe that two years ago, this strip of premium heritage-listed real estate was nothing more than a derelict dump for impounded cars, largely unused since the 1960s. Now it’s home to Brisbane’s benchmark hospitality hotspot for riverside dining and leisure.

Howard Smith Wharves is best thought of as a destination than a venue — thanks to the smorgasbord of restaurants and bars; hireable event spaces; and most recently, a boutique Art Series hotel. It takes a little exploring to get your head around this place.
Tucked underneath Story Bridge next to a bend in the Brisbane River, any spot along this prime piece of land offers panoramic views of the city skyline. Back in 2013, Brisbane City Council selected HSW Nominees to breathe new life into the abandoned 3.4-hectare plot. Led by director Adam Flaskas and with a history of refurbishing heritage buildings, HSW Nominees rose to the challenge by delivering a destination Brisbane dwellers have gladly adopted as one of their city’s go-to hospitality destinations.

The guiding philosophy behind Howard Smith Wharves is to offer ‘something for everybody’. The venue’s tagline is a place to eat, drink, play and stay. Be it Friday afternoon drinks or an upmarket dining experience, you’ll find something at Howard Smith Wharves to match your mood.
“We’ve tried to make all our venues attract a very broad market,” comments Lance Burrows, General Manager of Hospitality at HSW. “You get 18-year-olds all the way to 60-year-olds, and families as well. There are kids everywhere. It’s also a dog-friendly venue.”
A large amount of public space is designed into the Howard Smith Wharves’ footprint. Sitting between New Farm and Brisbane CBD, the precinct offers foot commuters a new riverside route through to the heart of the city – the only previous option being a walk along roadside footpaths. For this reason, the HSW walkways are wide and cycle-friendly. Joggers and cyclists are everywhere, enjoying the chance to exercise with this new access to the city. Behind the wharves are the stately cliffs of New Farm and Fortitude Valley. Two lifts were installed along the cliff face to carry people to or from the urban roads above.

when you enter, you feel that sense of elevation and of rustic grandeur

The central pub, Felons, was the first venue within HSW to open its doors towards the end of 2018. Since then Mr Percival’s cocktail bar has opened, along with ARC dining and wine bar, an independently operated Greek restaurant called Greca, and a fish and chippery. There’s never a dull moment, especially on weekends.
“It’s packed out here on a Friday and Saturday night, and it has been ever since it launched,” says Matt Hayes, Operations Coordinator at Ampd Electronics, which took care of the audiovisual design and installation. “The builders were sweeping the floor out on opening day, the site opened at 11am, and by 12pm you couldn’t find a free table anywhere. And that was a Thursday lunchtime.”
“Another advantage is that the whole site is licensed,” says Matt. “So you can grab takeaway beers and go sit on the grass, or buy a plate of fish ’n’ chips and go sit by the river to eat it. It is unique in that aspect.”

Ensuring every patron on Howard Smiths Wharves soil is given the experience they came looking for is no small task from a hospitality perspective. With years of experience under his belt, Lance knows a thing or two about what customers look for. And it extends beyond just high quality F&B.
“Guest expectations in this day and age are so high that you want to make sure everything is en pointe,” Lance observes. “As far as I’m concerned, music and lighting are the No. 1 and 2 things you need to get right in a venue. AV is one of the main aspects people notice, or don’t notice. If they do notice it, it’s usually because you’re doing it wrong. If they don’t notice it, it’s usually right.”
Brisbane-based audiovisual integrator, Ampd Electronics, chose to use a QSC Q-Sys audiovisual network backbone throughout the site. This connects all the individual venues together, allowing any audio source to be routed to any destination.
With a hospitality destination this large, there are distinct advantages installing an audio network that spans the entire precinct.
“Having the Q-Sys network running across all of the venues allows us to play any of the Nightlife music video playlists through any venue at any time,” says Lance. “We have a certain sequence that automatically turns on at 6:30am through all the outdoor speakers because we wanted the public using the precinct as a thoroughfare to feel a bit amped up on the way to work.”
Live bands or DJs perform on the outdoor grass area opposite the fish ’n’ chip shop. By simply plugging an output of their mixer into a converter box, their audio feed enters the Q-Sys network and is instantly available anywhere on the site.
Martin Audio loudspeakers take care of the sound indoors. A look through the AV spec list tells you HSW Nominees didn’t skimp. In Felons Brewery alone you’ll see (or hear) 15 x Martin Audio CDD6 premium loudspeakers inside the venue, 4 x Martin Audio X210 subs cleverly mounted on the diagonal ceiling beams, plus another 16 loudspeakers dotted around the place for good measure.
“We didn’t hold back on the speakers,” says Lance. “Our director wanted the music to be amazing and the system has really delivered. You get what you pay for with this stuff. I’ve used Martin Audio in other venues in the past and it’s the best. For us it was a bit of a no brainer.”
“There are QSC networked amps at each venue, each providing full monitoring,” says Matt. “We can look at speaker load on each one and report faults based on, for example, a speaker shorting out on the other side.”

As for AV control, it all runs from a central Crestron CP3 system which is interfaced via Crestron touchpanels wall-mounted in each venue.
Automation plays a big role behind the scenes. Evening lighting is turned on when the sun sets and the majority of music playback is scheduled. Not only does this mean the loudspeakers can be utilised outside of operating hours, but Lance says it reduces the need for micromanagement on his part.
“Training people on managing music and lighting inside a venue takes a lot of your time and it can be really frustrating. Putting in a good system that can automate things for you across multiple venues really takes the headache out of it. Our lighting is programmed through Dynalite and that’s controlled by Crestron too. It’s automated based on the sunset timing. That takes the pressure off having to continuously reiterate to your staff like a broken record, ‘The lights aren’t right, guys, can you fix it?’ You can trust that it’s always suitable. The same applies to the music — it’s all scheduled to turn on at the right volumes and the managers can adjust it if they like.”

HSW Nominees has certainly succeeded in turning Howard Smith Wharves into an appealing attraction for locals and tourists alike. Lance is grateful for the local support. “Brisbane has really bought into what we’re doing down here. Brisbane people are generally very proud of their city and this destination adds another dimension to it. It has really raised the bar for hospitality in Queensland 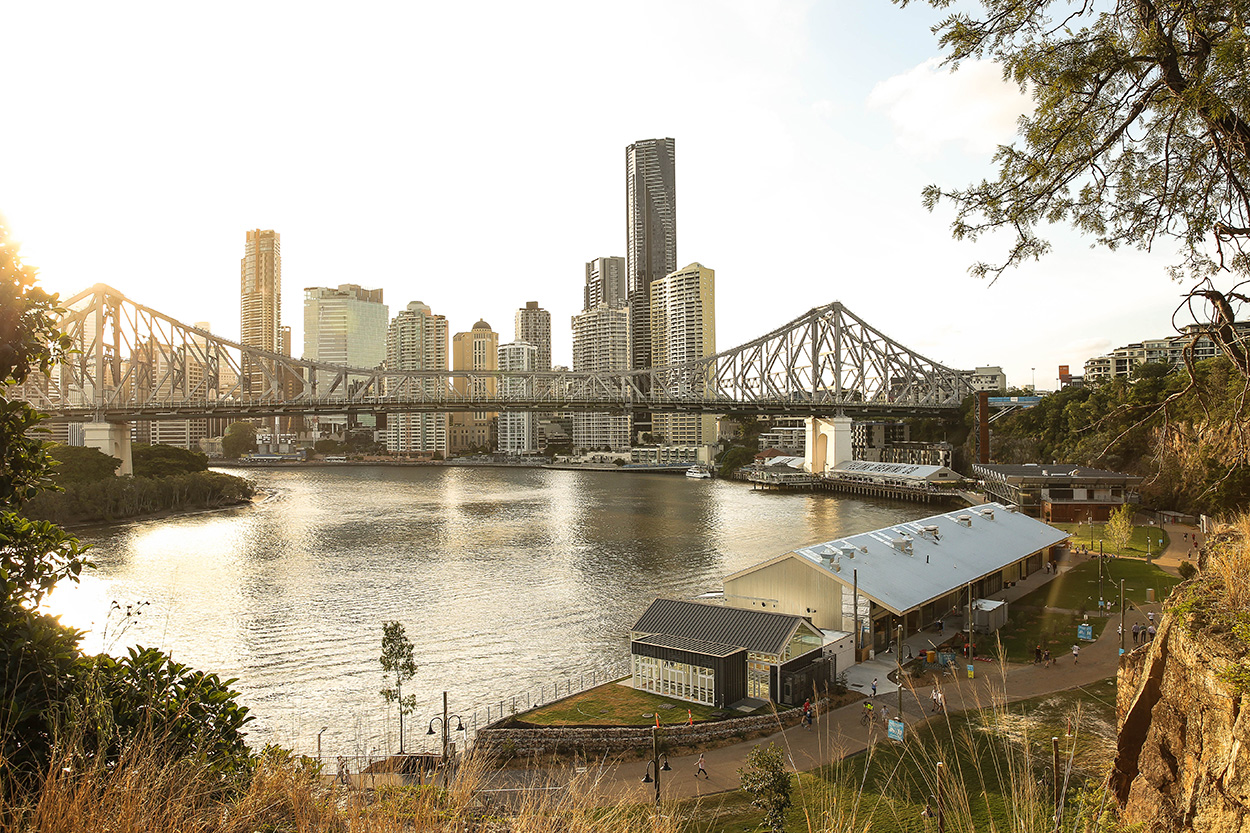 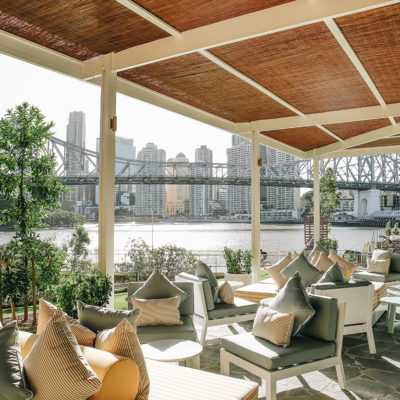 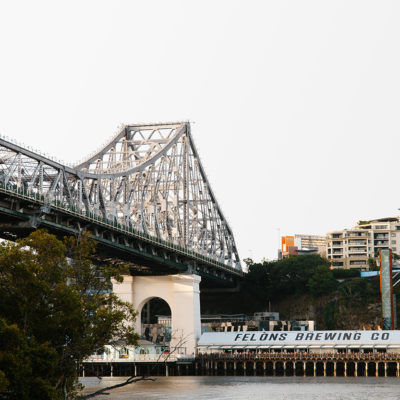 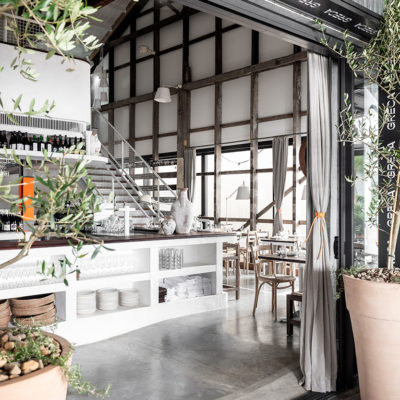 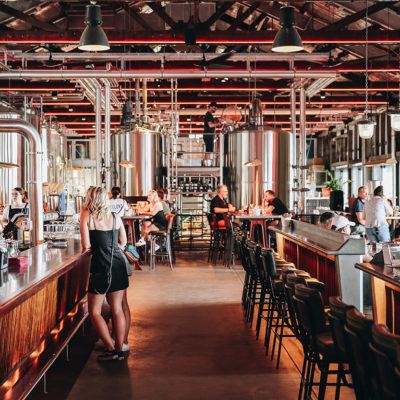 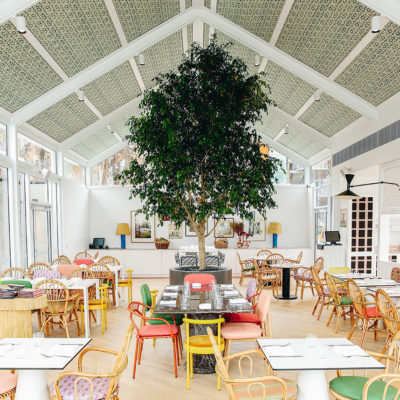 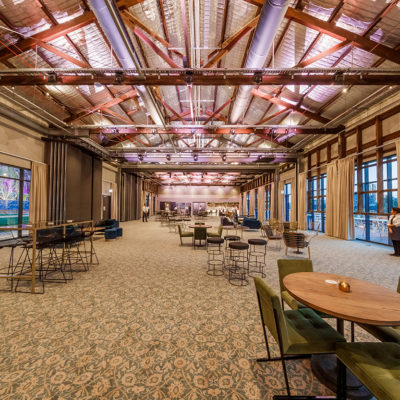 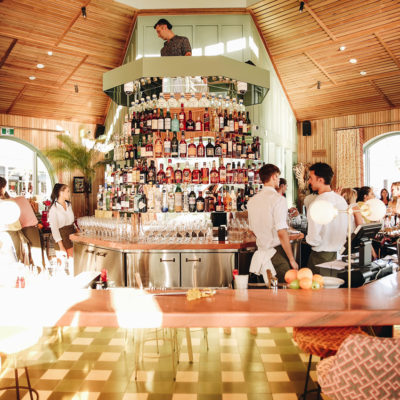 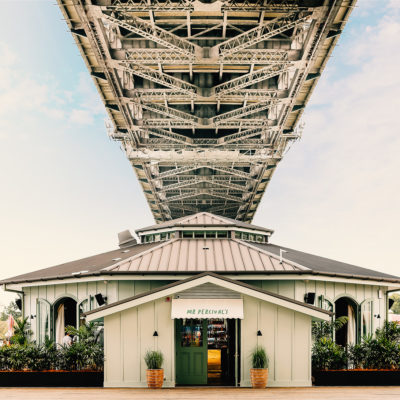 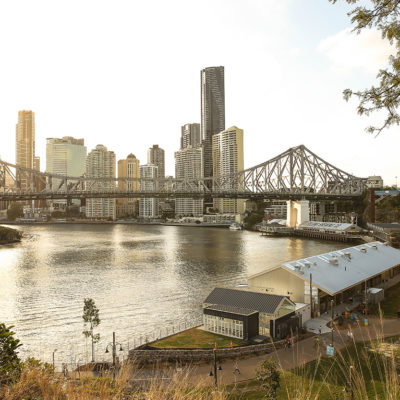 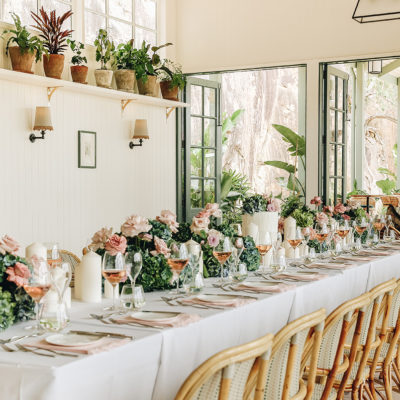 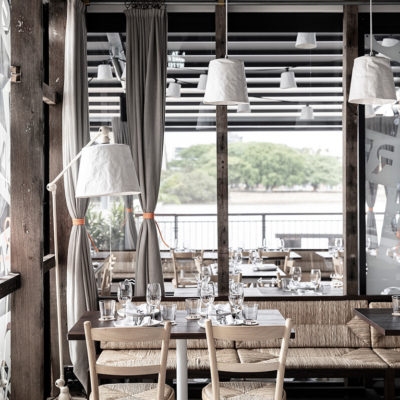 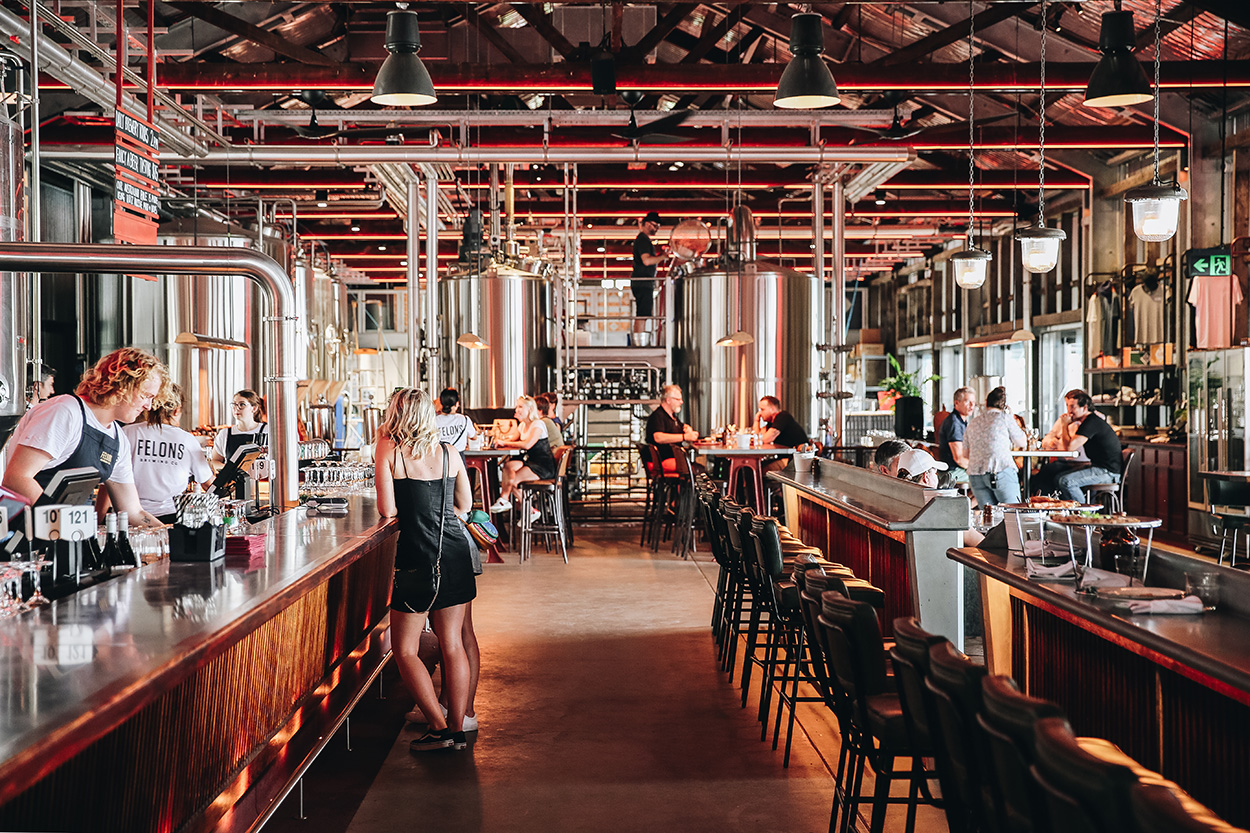 Felons: More than a steal

“The precinct ticks every box,” enthuses Lance Burrows, General Manager. “Felons Brewing Co, as a venue, is an approachable offering. It’s not expensive, it’s everyday, the location is unbelievable. It’s a brewery and, yes, beer comes first here. But you can stay for a longer period of time and enjoy the food too. It’s very traditional pub-style food — pizzas, burgers, parmas — but we’re not just banging it on a plate. We genuinely care about the way we deliver our food and I think it shows in the product.” 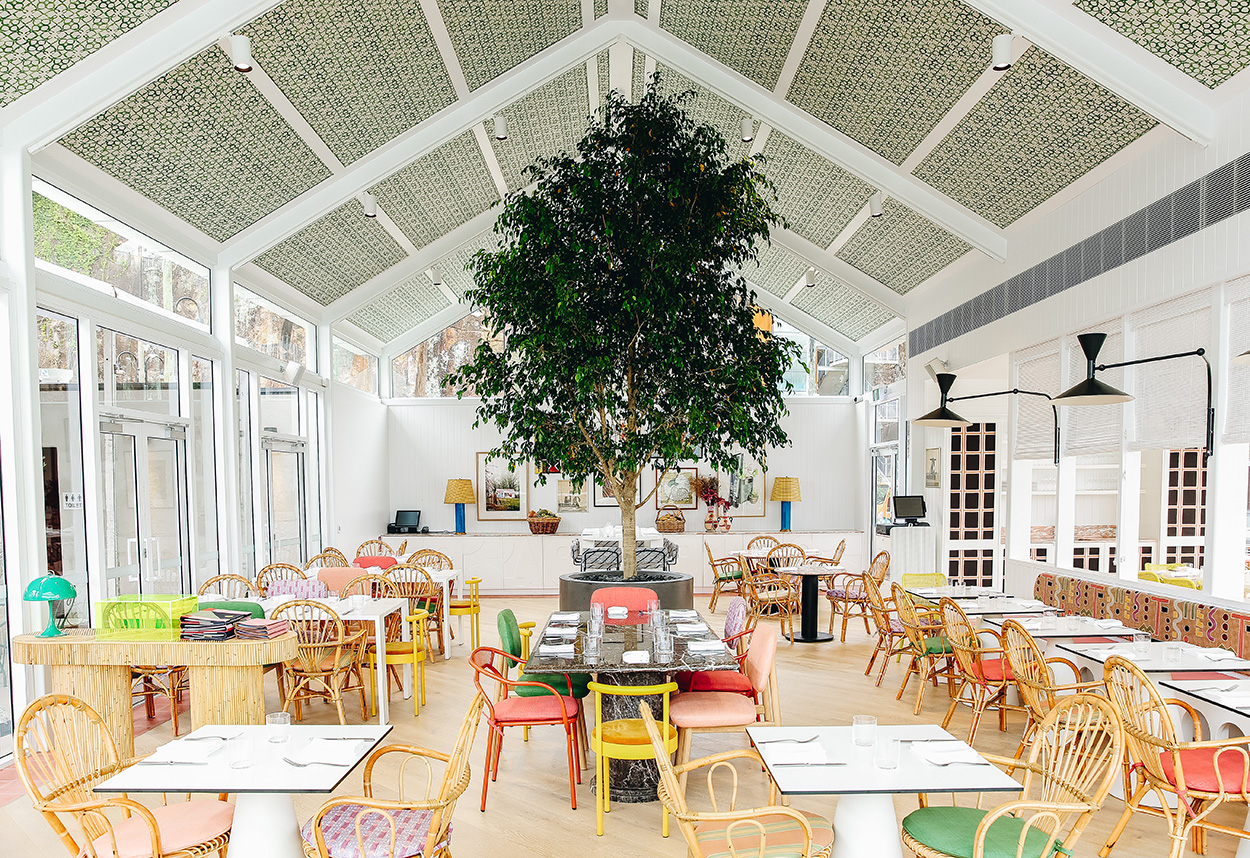 “Mr Percival’s is a cocktail bar with a slightly more premium offering, where you’d go before and after a meal. Then for a really elevated experience, we have ARC. Understanding the scope of each venue as well as the scope of the precinct as a whole was important,” – Lance Burrows, General Manager. 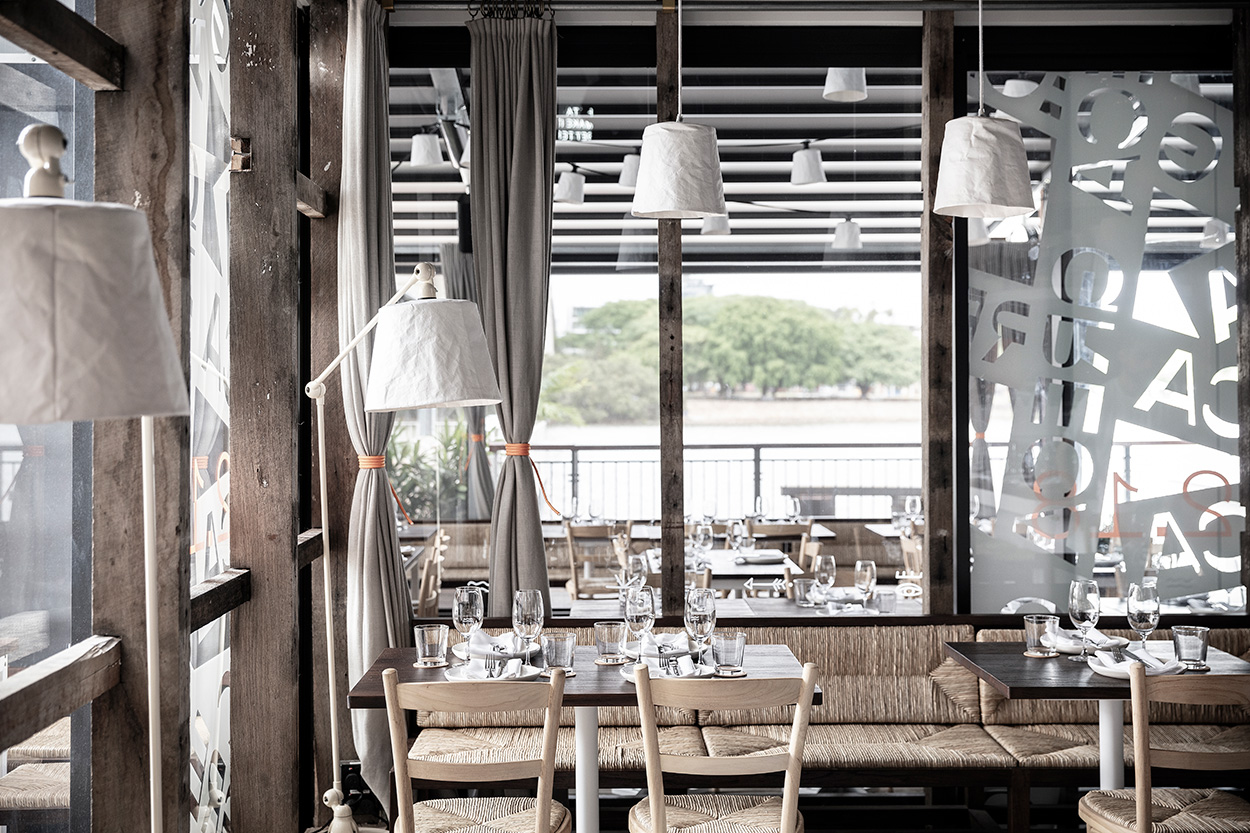 Restaurateur Jonathan Barthelmess’ GRECA is a high-profile denizen of the Howard Smith Wharves.
The indoor-outdoor trattoria, designed in collaboration with interior architect George Livissianis, is complete with an open kitchen and fire pit, serving the type of Greek food that conjures thoughts of a Mediterranean island village. Embracing the warmer climate, tables spill out into the open air, while core timber components are retained in the spartan interior, brought to life with Mediterranean whites, polished concrete floors and simple furnishings.
To celebrate the produce, and connect the kitchen to every part of the dining room (including the outside areas), creating the kitchen in the centre of the room was a key component of the restaurant’s design. The textures and colours of the shed inherited at Howard Smith Wharves were taken into consideration, refreshing its dark and textured walls and whitewashing them to give them a fresh new skin — adding light and uplifting it so that when you enter, you feel that sense of elevation and of rustic grandeur. Texture was added to the space with soft linen curtains, woven chord seats and rich timbers, and waxed paper lantern shades have enriched the space with energy and intimacy and a simple pop of colour has tied it all together with personality and a youthful edge.