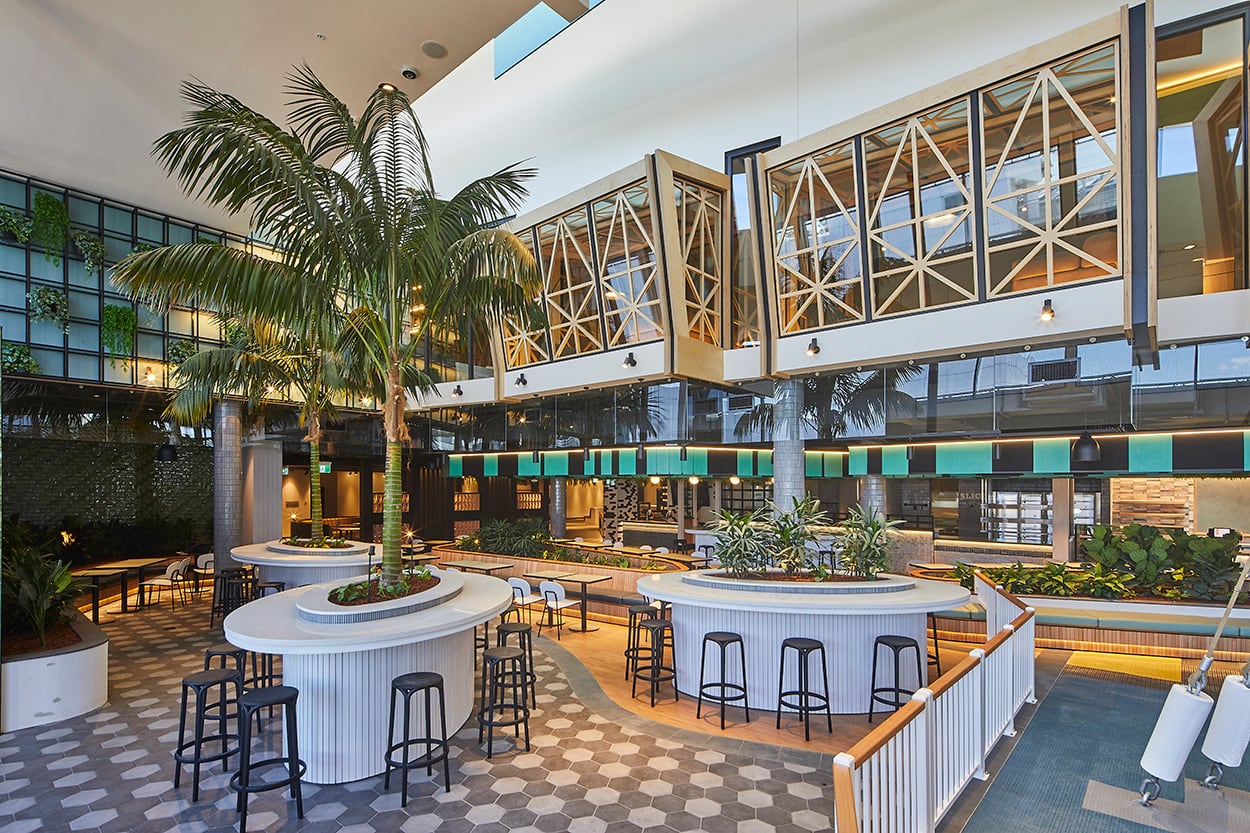 Way out west in Club Land, the Liverpool Catholic Club is giving local families something to cheer about.

There are some big clubs out west. Few are bigger than the Liverpool Catholic Club.

How big? The club has its own hotel (managed by Accor as a Mercure property). It also has its own ice skating rink. It even used to have its own cemetery! It might be a huge club but it’s a community club with a family atmosphere. Many of the staff have been with the club for decades. In fact, the current general manager, John Turnbull, has been in the role for 35 years! (Who needs a club cemetery when your GM is planning to be interred at his desk!)

He and assistant general manager Dave Vidler (coming up to 34 years at the club!) have overseen an extensive refurb. Stage One of the works is now open and includes a food court-style casual F&B offer, arguably the best new kids’ indoor playground in Australia, and upstairs there’s a multipurpose theatre/cinema, function rooms, and a large pre-function area. The club’s long-time architect, Brian Wood, got the ball rolling while Altis Architecture picked up the baton after Brian retired — the interior architecture is effectively Altis’ baby. Kane was the builder on the project. It’s a project that reflects well on all concerned.

venue chatted to GM John Turnbull about the club’s big picture. I started by asking how he came to arrive at the combination of new facilities encompassed in the new new building.

John Turnbull: From time to time we check in with the clientele and the market, ask questions and take action. I remember about 18 or 19 years ago we instituted all our sporting clubs. Now, we have 30 rugby league sides, 300 girls involved in netball, there are cricket teams, ice hockey teams… we’ve got kids coming out our ears! I’ve got three playing fields for cricket and football, and an ice skating rink on our property. All that was based on a brainstorm, asking members what they want.

venue: What were the members asking for this time around?

John Turnbull: It’s pretty easy to know what the over-50s want: they want comfortable chairs, good food, good facilities, accessibility, lounges… But when you turn over the kind of money we do, you’ve got to do more than that, you’ve got to promote the community aspects.

This new development is about community; and it’s about greatly increasing our back of house capabilities.

venue: You’ve got some happy back of house staff, then?

John Turnbull: We do. By wa y of some context, we turn over way more food than we do grog — we serve a lot of meals. But our back of house was really suffering — we didn’t have enough space and the facilities were ageing. Now we’ve got brand new kitchens, refrigeration, a new delivery dock, storage and more. So for our chefs and staff to have a revitalised kitchen area, with new coolrooms, freezers, ovens, and cookware, it’s a real shot in the arm — these are things that are going to last us decades.

The kitchens are now very high tech and way more eco friendly. All the food waste is now mulched and helps to reduce our rubbish by more then 20 percent. All of these things are great, but they cost a lot of money. But eco-wise they make us more efficient and easier to run.

venue: Presumably your members were also telling you they wanted out-of-this-world playground facilities?

John Turnbull: The club has a huge family focus, so we looked into how to make families and kids more comfortable. We discovered that parents are comfortable so long as they can see their kids playing. It doesn’t matter how loud the kids are, no problems, so long as mum or dad can spot where they are. Put the kids in another room and that becomes stressful.

That informed how we designed the new kids’ area. The kids can run amok but the parents are happy because they can keep an eye on them.

The playground has been imported from Germany. It’s designed primarily as a superior outdoor playground and you won’t find one like this, at this scale, indoors, anywhere.

We’ve got Altis to thank for the playground, they did the research and sourced it. The playground has been a big hit.”

venue: Not many clubs can boast a cinema. Will it function as a cinema all week?

John Turnbull: The theatre will be a cinema once or twice a week. The huge LED screen will be very useful at other times. We had the room half full on Melbourne Cup Day when we opened it up in an ad hoc way — it certainly proved useful there as a big screen.

I’m most pleased with it when it turns into a meeting and lecture space.

Every week we have Probus or the 50-Plus Club meeting here with guest speakers and conferences. In those circumstances we’ve had to set rooms up in a lecture style, doing our best to turn them into spaces they weren’t designed to be. Now, we’ve got the theatre and it’s perfect for those kinds of uses. We even have estate agents using the theatre for auctions.

Once a year we’ll use the theatre for our annual presentation night. We hand out scholarships to school kids; it’s a big day for the club. Putting the stained glass windows in, thanks to the Epson projectors, is a great idea to theme the space.

The other function spaces are a very welcome addition to our corporate offering. We have a very high demand for groups of 30 to 50, needing a function space, having lunch and needing all the latest AV technology. We’ve now got that capability.”

GROWING INTO THE SPACE

venue: The new facilities — including all the food court areas — greatly increase your capacity from a front and back of house perspective. Presumably you’re looking at some real growth in the future?

John Turnbull: We had a consultant through not so long ago who commented that with the club expanding its seating for a sitdown meal from about 350 to 800, we’d need to advertise to begin to attract more members.

The truth is, I already had those people even before the build. We were serving 700+ meals on a Friday night and once they had their meal they were struggling to find a seat. So I don’t think we’ll have trouble filling the extra space.

Liverpool is in the middle of Club Land. And it’s also a working class area. People love to get out of their homes and have a meal in a clean, comfortable, contemporary area like ours. We’re like their second lounge room.

Having a stable staff is really important to maintain that level of comfort. We have a very low turnover of staff.

venue: It’s an impressive refurb, John. What was it like to finish it without your long-time architect and work with Altis?

John Turnbull: “We first dealt with Altis Architecture when they bid for a redevelopment design some years ago. They didn’t win the bid but they were impressive. When Brian Wood retired we invited Altis to pitch for the work. They’re an experienced part of the clubs industry and we’ve been very impressed with their work.

I’m hard to please but I’ve been very impressed with the level of finish here, which is a testament to the work of the builder, Kane, and Altis.

venue: Given the new facilities are in response to members’ demand, you’d hope they would be grateful! How has the response been?

John Turnbull: “People often remark: ‘Who thought of all this?!’. The truth is, it’s been a team effort. It’s a combination of the club making it our business to know what our members really want and then having an architect and a builder who can make it a reality.

It’s been an iterative process — something the board in conjunction with management has been intimately involved with. The design has evolved, including some late changes we weren’t afraid to make. For example, a McDonald’s was in the first floor plan right up until the 11th hour. There were many, many changes which Altis had to accommodate.

The playground clearly is a huge feature of the new area, and a real statement about how seriously we take our families and kids.

It’s been a great experience and I’m very proud of what we’ve been able to achieve here.

We’ve got a huge community focus here at the club. We pump a lot of money back into local schools, and providing scholarships for kids in the area, which has a lot of disadvantage. 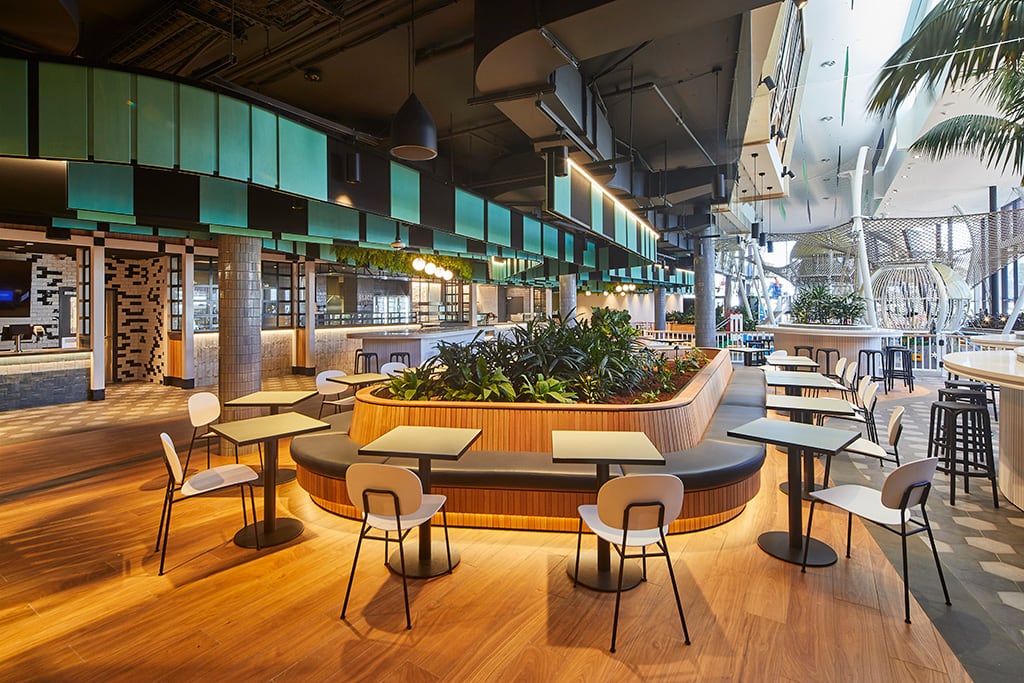 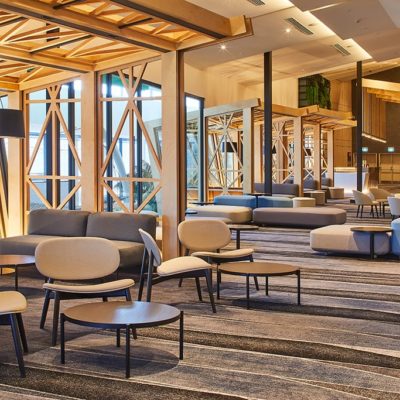 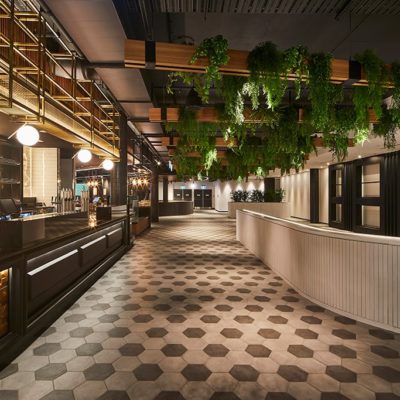 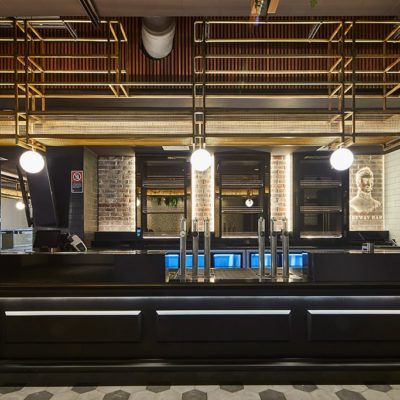 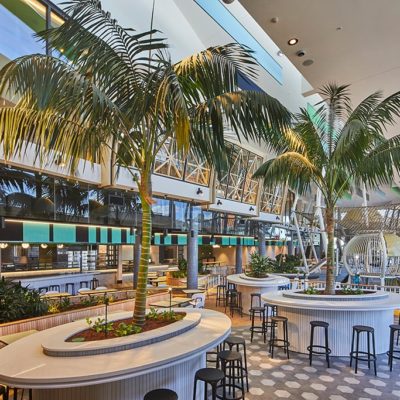 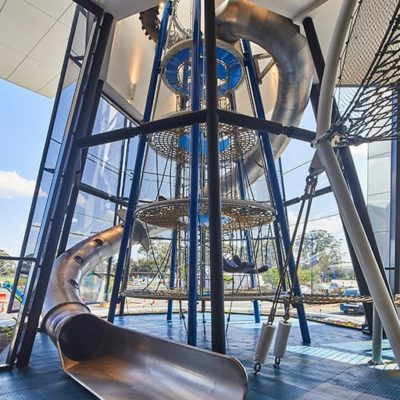 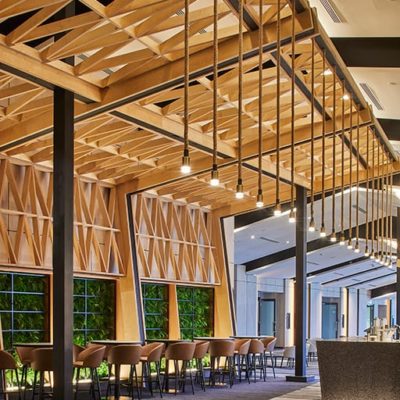 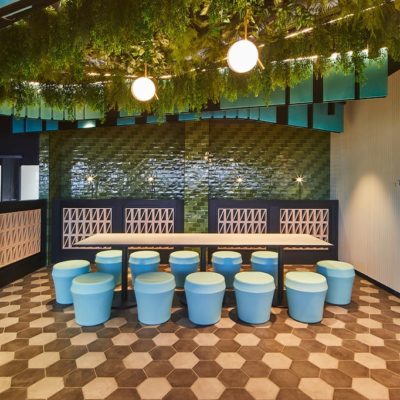 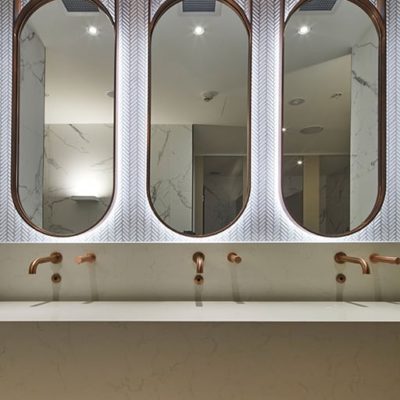 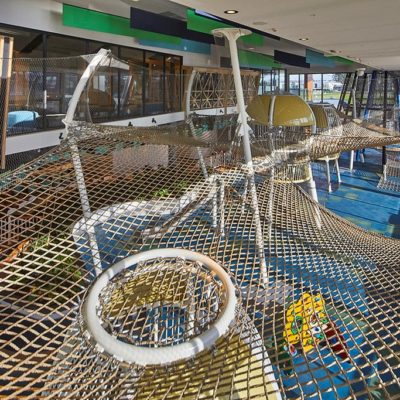 The large pre-function area overlooks the play area. It has its own bar and that helps make the first floor more versatile. The spaces can cater to larger events and weddings or it can be a place for a mothers’ group to have a coffee and watch their kids play.

Julia Amos, Altis Architecture: “The whole top level is inspired by the netting of the play structures — including the carpet design and the structure in front of the cinema. The top level is separated by a glass wall for acoustics purposes. Pods allow parents to sit and look out over the play area, in fact some of the play area is at the same level as those pods.”

Julia Amos, Altis Architecture: “We’ve designed the eating area as something like a food court to complement the playground — it’s light and bright and fun. The food offering includes a gelato and juice bar, pizza oven, a fully catered cafe, a bar and a brasserie, all served by an extensive commercial kitchen.

“The new food court makes a statement. The club isn’t just in competition with other clubs in the area but also with the likes of a Westfield shopping centre. The new space will certainly attract families. With the greenery and the natural light it’s a very pleasant place to be in at any time of the year. Whether it’s raining or 40° outside it’ll be quite a sanctuary.”