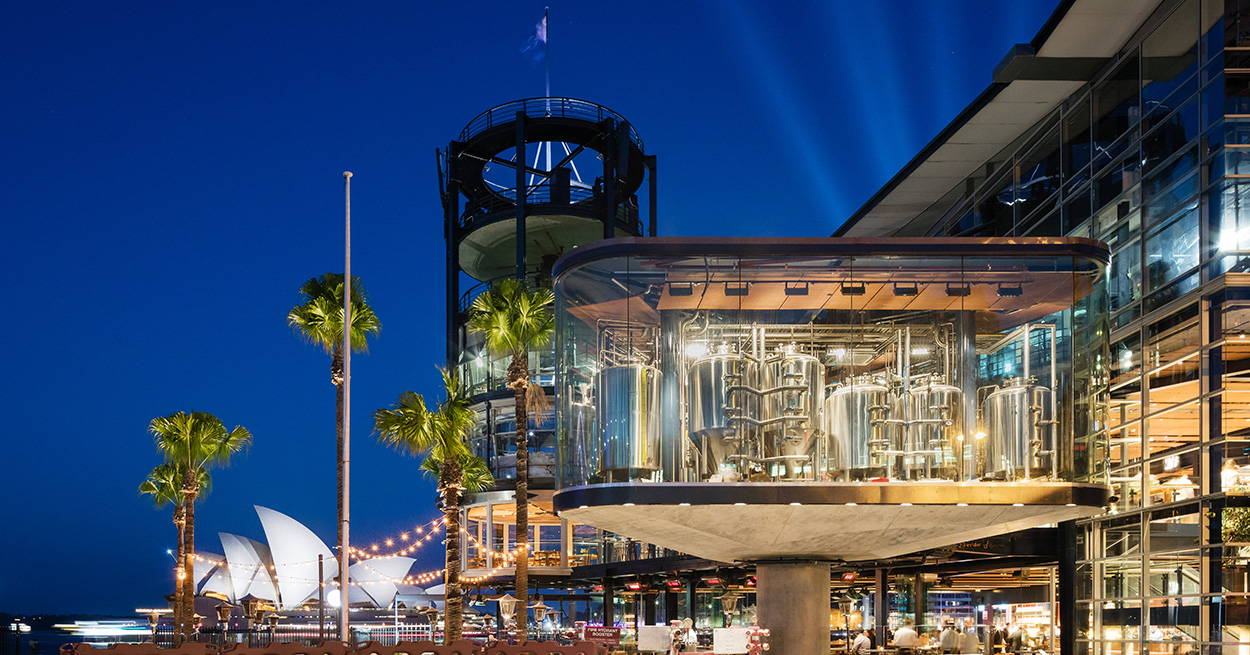 Mantle Group moves its take on the Squire brewhouse into The Rocks.

It’s new year’s day nirvana: Sydney Harbour Bridge on one side and uninterrupted views of the Sydney Opera House on the other. Without doubt, Squire’s Landing occupies one of the most enviable hospitality locations in the world.
After Doyles (the famous fancy fish ’n’ chippery) upped stumps, the Mantle Group won the NSW Government tender to take the Overseas Passenger Terminal tenancy.
The Mantle Group has most of its hospitality interests in Brisbane, with a number of high performing restaurants (mostly) in Southbank and elsewhere. It also runs the Charming Squire, an outrageously successful Brisbane brewhouse, and the group’s first partnership with Lion, leveraging the James Squire branding.
The Mantle Group determined that its first foray into Sydney would be behind another James Squire-branded outing: Squire’s Landing.
Squire’s Landing is another brewhouse with a major focus on food and, of course, James Squire beer. There’s a formidable menu of beer on tap, including an ever-changing offering brewed in-house by the Squire’s Landing full-time brewer.

venue sat down with the general manager, Adam McIlveen, to hear more:
“The Squires brand is well established brand. People know it, love it and it has a broad demographic appeal — you’re not painting yourself into a corner by appealing only to beer enthusiasts.”
Quite right. Beardy beer hipsters aren’t over-represented. And, although, the James Squire beer range is extensive and prominently featured, the food is just as important.
Most nights the bustling show kitchen has a whole animal spinning over the coal pit, while the Josper wood-fired oven would also be getting a work out. Some days it might be pig, lamb, duck or even goat.
“Our original plan was to be open in time for Melbourne Cup 2017, but with a number of unavoidable delays we didn’t open until May 2018 — just in time for the Vivid festival. During that early peak period we had to have all our staff on-boarded — 40 on the floor and behind the bar, with another 30 in the kitchen. It was intense but we survived largely unscathed, and amazingly kept all our staff.”

Squires Landing has the flexibility of two levels. The upper level can be booked for functions while it simple serves as additional space during peak periods.
The license is for 800 seats. Some 400 of the capacity is alfresco. Of that, 240-odd seats are kept warm by Bromic heating.
Adam McIlveen, General Manager: We would lose almost 30% of our seating footprint if we didn’t have the appropriate heating solution.”
The gas heaters are Bromic’s Platinum Smart-Heat models and provide warmth in all the outdoor undercover areas both on the ground floor and the verandah on Level 1.
“We involved Bromic Heating in from the planning stage,” recalled Adam McIlveen. “We provided Bromic with our ideas and they came back with a detailed heating plan and recommendations.”

So how about that new year’s eve party? Well, tickets start from $450 with plenty of overseas interest from visitors wanting to soak up the sight of Australia’s two most recognisable landmarks lit up with a couple of tonnes of fire crackers. That said, as we went to press, a big corporate hadn’t yet splashed out on a top floor lock out. Tempting. umes is astonishing.” 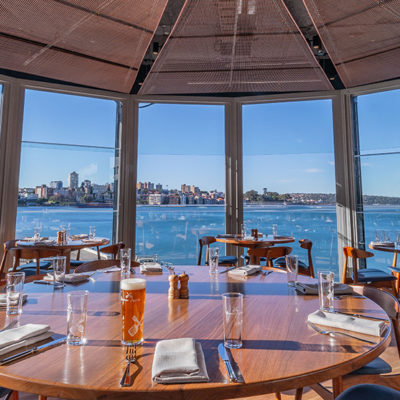 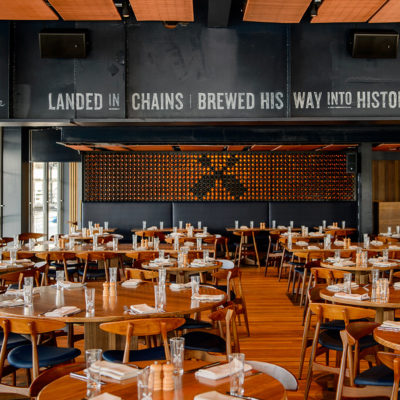 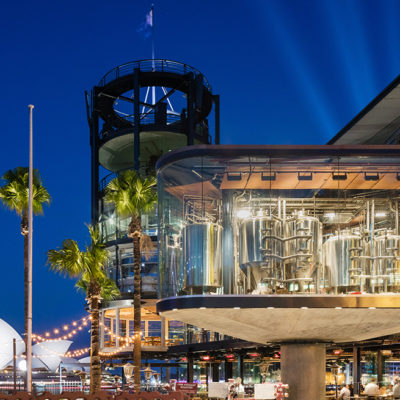 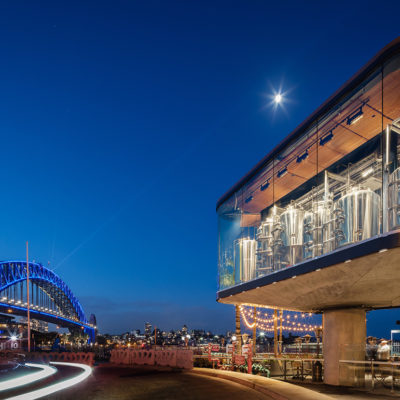 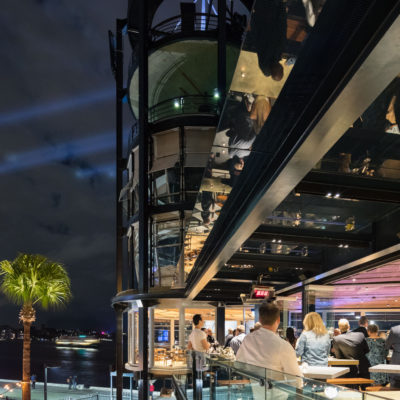 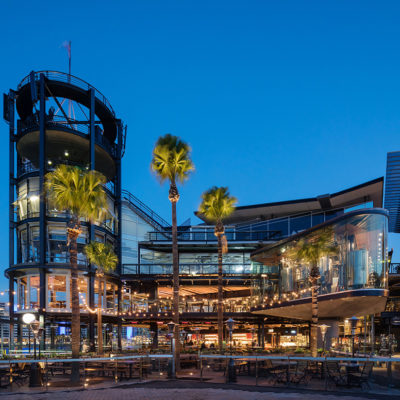 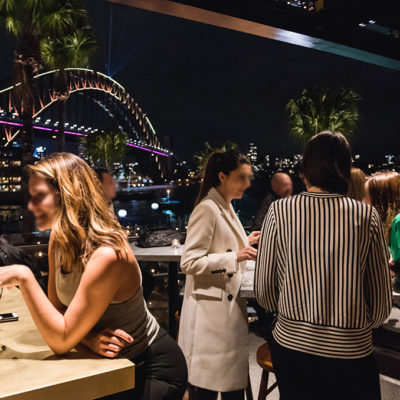 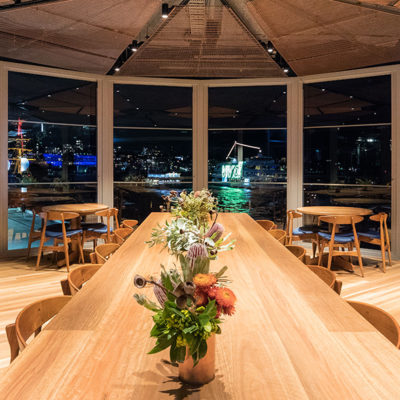 Mantle’s go-to AV provider, Gigawatt, took on the audiovisual installation, spear headed by boss, Ben Finlay. Ben spec’ed a KV2 Audio loudspeaker system, after the success of a similar install at the Charming Squire in Brisbane.
“The Mantle Group  love the p roduct,” enthused Ben Finlay. “It started with when we won the Charming Squire the job. The client loves the philosophy of creating a comfortable listening environment, where you can hold a conversation, hear the music clearly without the music negatively impacting the interactions.
“KV2 Audio loudspeakers are a higher end product, but the extra investment is worth it.”
venue can attest to this. The guitarist/vocalist in the corner of Squire’s Landing plumbed himself into the house system, which consists of dozens (36, to be precise) of distributed compact KV2 Audio ESD6 loudspeakers, and never distracted with a ‘band in the corner’ hot-spot intensity.
A Symetrix Prism 12x12 audio processor takes care of the DSP work and ensuring the levels are right in the various zones.
Squire’s Landing isn’t a sports bar and you won’t find a screen in every line of sight. But two Epson G Series EB-G7905UNL 4K projectors light up dropdown screens when an event is too important to miss.