From hopeless hack to championship contender: this is the remarkable Cinderella story of the Strathfield Golf Club.

Strathfield Golf Club was on the ropes. The salad days of membership waiting lists were well and truly over. Interest was dwindling and there was no money to give the club the shot in the arm it so desperately required.
Things were so desperate that the board recommended a merger with one of the nearby mega-clubs. That proposal was knocked back by members and a new board began to look at any alternatives that might breathe life back into a club that only barely had a pulse.
The decision was made to sell off the practice fairway and use those funds to rescue the club. The 20,000sqm parcel of land was valued at $13m and the club began the process of applying for a council DA. Instantly the developers began sniffing around, universally recommending the club put both the practice fairway and the old clubhouse land up for sale at the same time — the combination would be far more attractive.
The ‘sniffing around’ became quite a bit more intense from that point, as club General Manager Neil Hardy recollects: “The first offer we had was for $28m and there was a subsequent offer for $40m. At that point we knew we were looking at a good return. In the end, we went to tender and we got $52.5m. So that was a great windfall and we luckily caught the top of the market.”
In a short space of time Strathfield Golf Club went from basket case to a cashed-up contender. The resurrection plan would involve a brand new showpiece clubhouse, a redesigned and revitalised golf course, and a stash of money to maintain the course in perpetuity. Happy days.

The club did its homework.
Industry expert Jeff Blunden was commissioned to produce a report for management that conducted a stocktake on the function spaces in the area, the changing demographic, and other key barometer readings that would provide the club with the data it needed to determine what sort of clubhouse was appropriate and the business case for the function space.
The board signed off on a budget in the order of $20m to build the clubhouse that would encompass three distinct areas of activity: members’ area, a dining room and a function space.
The project was put out to tender with five architects, both locally and internationally, submitting designs.
“Altis Architecture came up with a fabulous design that just blew everyone away,” recalls Neil Hardy. “The design needed to have a wow factor and the Altis design was clearly superior in that regard.”
“We could have played it safe but given the nature of the tender process we designed to push the boat out,” remarked Altis Architecture Director Rolfe Latimer.
“We knew it might work for us or against us, depending on who was reviewing the submissions,” fellow Director Andrew O’Connell commented. “But our proposal wasn’t one that could possibly be ignored!”
Viewed from above, the Altis design takes the form of three golf club heads and sculpturally evokes the dramatic sharp lines of a sand bunker. The three buildings harmoniously sit within the landscaping of the golf course — the nearby greens and tee boxes — each taking full advantage of the beautiful vistas over the course. Architecturally it’s as sympathetic to its surroundings as it is stunning.

Far from simply being a great-looking architectural shell, the Altis design was easily the most pragmatic of the proposals. Underground car parking and a central back of house core would make the new club house supremely practical. The pro shop, buggy storage etc, so often entirely separate from the rest of the facilities is tucked under the main first level of activity and within chipping distance of the underground parking.
“That’s the beauty of the design,” reflects Rolf Latimer. “It’s a 10 out of 10 for golfers and yet works just as well for social users. It’s unusual for an iconic building. More generally something has to ‘give’, but that wasn’t the case here, everyone’s needs are met and expectations have been exceeded.”
Unusually, the club debriefed the losing architectural firms after Altis was awarded the project, as Neil Hardy explains: “We had permission from each of the firms to share their designs. All of them without fail reported back saying: ‘we see why you went with this Altis design, it’s brilliant’.”

WHAT PRICE AN ICON?

A $20m budget, although not lavish, would seem to a healthy amount of money to see the venue through to completion without undue compromise. As it happened, Neil Hardy, Altis and the builders needed to draw on all their experience and ingenuity to maintain the design intent while remaining within budget.
The roof structure, for example, is a steel lattice arrangement, saving on tonnes of structure. “We’ve used some clever modern technologies to achieve the result within budget,” noted Andrew O’Connell. We didn’t want to spend undue money on the engineering; money that might otherwise be used on the interiors.”
The interiors are pared back and its clear that money has been saved on some of the finishes, but such is the stunning architectural and the organic lines so remarkable that the interiors don’t suffer.
“The organic shapes create interest in and of themselves,” agrees Rolfe Latimer. “We’ve spent less on the interior finishes than we may have in another upmarket clubs interior but the simple finish does a lot of the work at Strathfield.”

Although it has 15 machines, the club doesn’t rely on gaming. Functions are the new currency.
The club has wisely outsourced the catering, allowing them to get accustomed to the idea of managing a new venue and business operations.
The golf course is adjacent to the sprawling Rookwood Cemetery, and the new clubhouse is only a well hit drive from the front gates. With the proximity comes a considerable midweek trade in ‘life celebrations’ (wakes, in the old language). The weekend sees regular function business — weddings, birthdays etc — meaning the kitchen ticks over most nights of the week.
“The first weekend, we catered for 550 people,” recalls Neil Hardy. “We were going to have a soft opening, instead we had a trial by fire. But people were absolutely blown away by the whole experience.”

The eyes of the industry are turning to Strathfield Golf Club. And not just domestically but even overseas. Golf memberships are down all over the world — many are barely viable — and here is a club that seems to have found the circuit breaker.
“If you’re relying on golf membership money and green fees to survive, you’re on borrowed time,” warns Neil Hardy. “I’ve probably had 30 clubs come to see me; battling clubs from all around the country that are looking at what we’ve done and picking our brains. The industry is looking to us as a standout success story — the best story of the year.”
Altis Architecture is already seeing the impact: “Strathfield Golf Club has provided a copybook example of how to revitalise an ailing club; not just a golf club,” reflects Rolfe Latimer.
“Golf courses are a special case,” observes Andrew O’Connell. “Very often they’re sitting in the middle of suburban areas — prime land — and have under-utilised remnant pieces of land they could sell off, rezone, and capitalise.”
Altis Architecture is well placed to assist. With its long-standing hospitality sector expertise it understands the tensions between maintaining the utility of the venue as a members’ clubhouse and what’s required of a modern-day hospitality venue.
“We’re seeing more and more of this,” notes Rolfe Latimer. “Clubs reinventing themselves. Bowls clubs are also an endangered species. But we’re seeing joint ventures where a clubs are entirely integrated into a mixed living development, for example. They’re becoming more mixed use — operationally and as a business model. A clubs’ hospitality and leisure offering can bring plenty to a commericial or residential development — it’s a powerful business model for future sustainability.”
As for Strathfield Golf Club, its future is bright. Even golf memberships are up some 40% thanks to the redesigned course and world-class facilities.
No one is demanding the return of the old practice fairway. 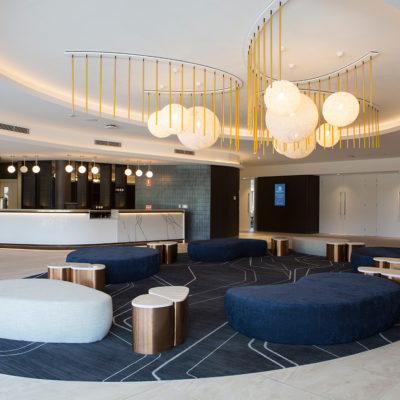 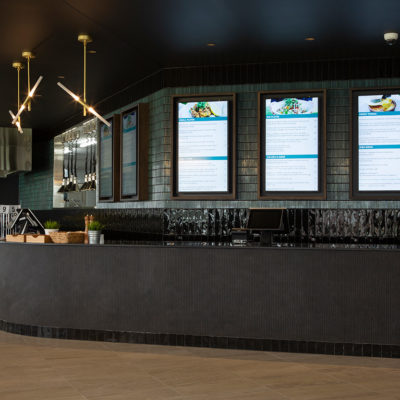 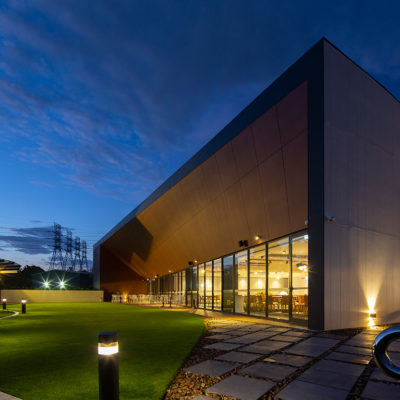 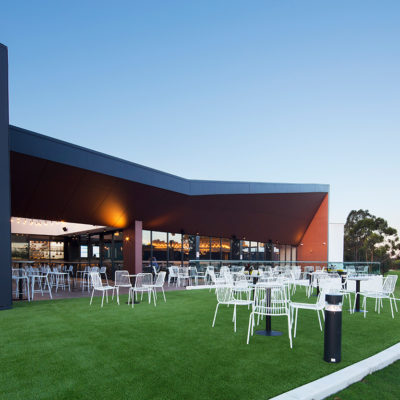 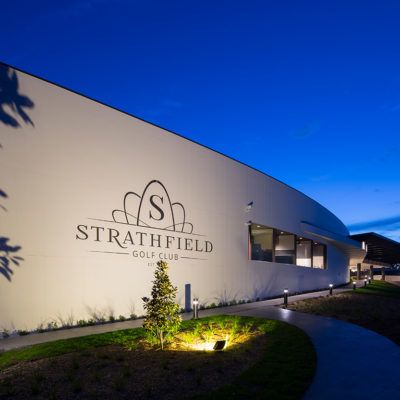 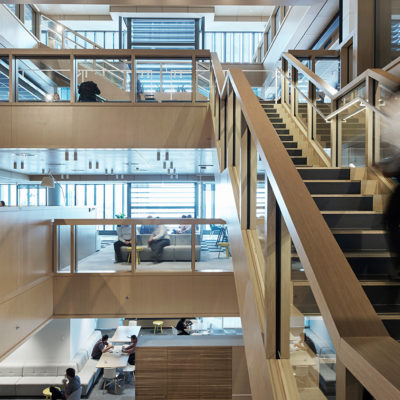 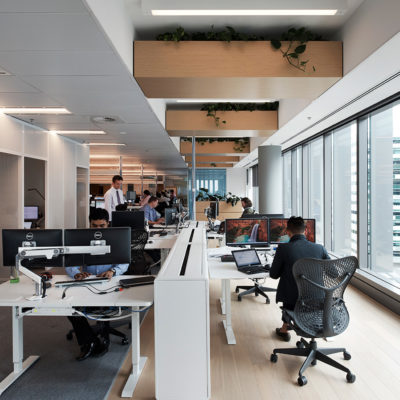 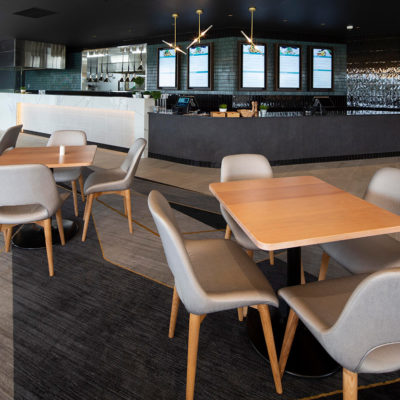 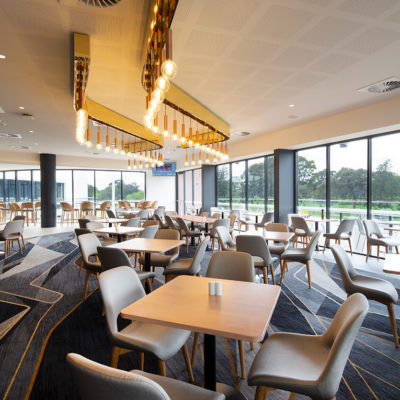 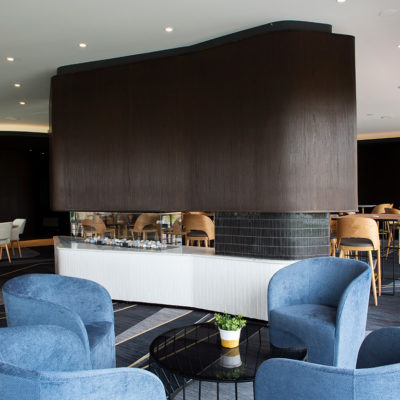 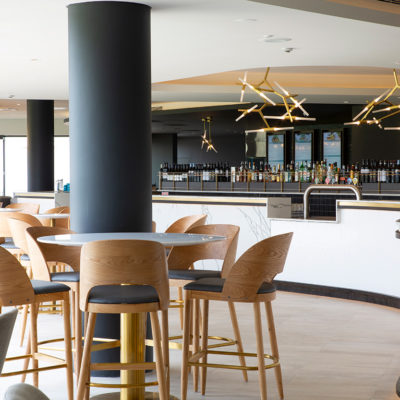 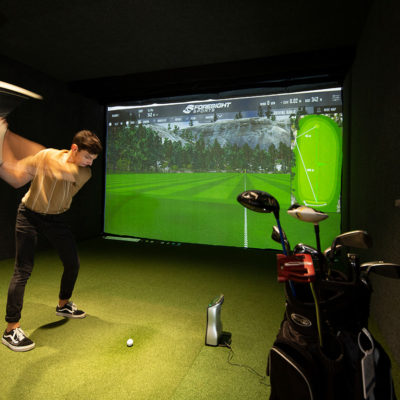 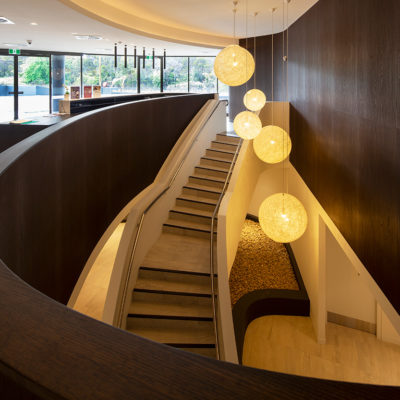 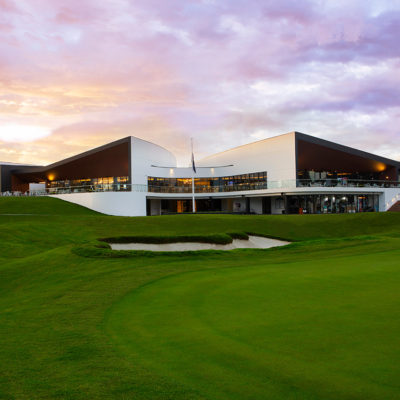 "Altis Architecture came up with a fabulous design that just blew everyone away".