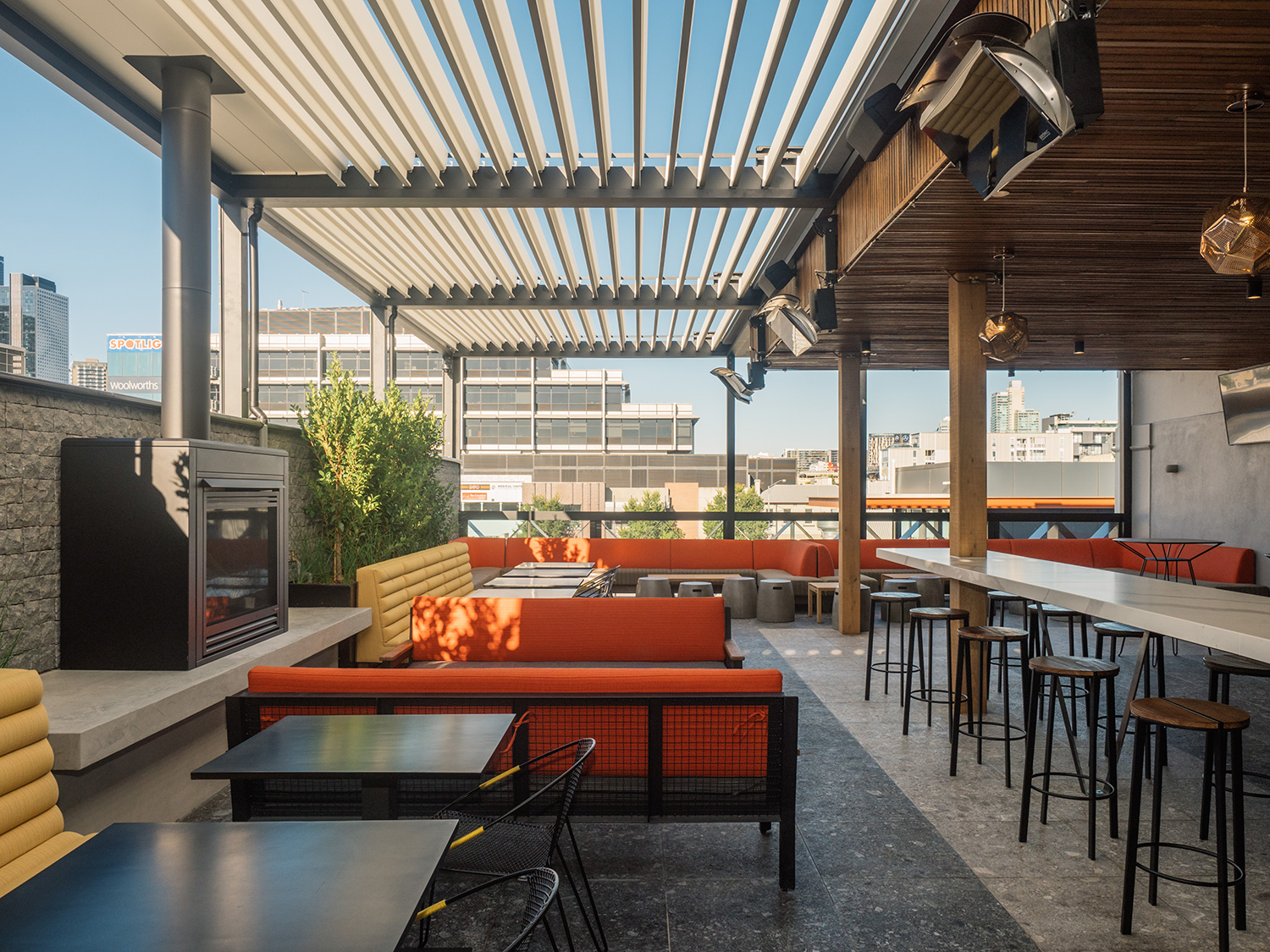 It was one of the most famous pub fires in recent history. And there have been a few.

The Albion Hotel in South Melbourne sensationally burnt down a few weeks short of its reopening in 2015. The industry was agog. Was it an insurance job? Bikies? (Notice no one would consider something as benign as an electrical fault?)

Turns out it was a desperate contractor who couldn’t meet deadlines and was hoping to start a ‘small fire’ to postpone the launch date. Like many bad ideas it turned really bad, and a minor fire turned into a full blown conflagration. Almost nothing but the facade could be salvaged.

The Albion is owned by the Albert Park Leisure (formerly the Darcy Group), and hasn’t become one of Melbourne’s premier operators by giving up at the first sign of adversity. But rather than starting again with a carbon copy of the first design, director, Matt Darcy, his partners and his team took time to reflect: “The first design was predominately a night time venue. After the fire we were determined to come back bigger and better, and design a more well-rounded venue; more of a lifestyle venue that would trade from lunchtime through to 5am.”

The new venue sees the old design flipped on its head. Originally the offices were on the top level; now they’re on the ground floor. In doing so, Matt and his team were able to build one of the best rooftop venues in Australia.

Matt Darcy: “We wanted to build a rooftop bar that gave us the opportunity to take advantage of the amazing city views we have here in South Melbourne. So we flipped the design and put the offices and all of the back of house services on the ground floor. Then Level One became a lounge that could morph into a nightclub and then on the next level we built a rooftop bar. I think we’re the only rooftop bar in Victoria with a 5am licence.”

It seems glib to say the fire was the best thing to ever happen to Albion, but undeniably the reincarnation hits the sweetspot. The hero is unquestionably the rooftop which, thanks to clever thinking, retractable blinds and an awesome Bromic outdoor heating design, will trade all year around. In almost every regard it transcends what you might picture in your mind’s eye when you hear the words ‘rooftop bar’. It’s a large space with a variety of seating options. There’s a full-length, fully-stocked bar. There’s space for a DJ and dancefloor. And as Matt just stated, it can stay open all the way through to 5am.

The function level is as versatile as the rooftop is accommodating. After 10pm it neatly transforms into a nightclub. The Disco Doctors were engaged to provide the audiovisual components. The technology investment in Martin Audio loudspeakers, and a large-format LED wall (from Proscreens), in particular, gives the Albion the tools it needs to kick the space into another gear.

“It’s important that we cater to a larger demographic than what was originally planned for the Albion. There are those who love a nightclub but they might be joined by those who’d rather be upstairs at the rooftop bar. Clubbers can take a break upstairs and there will always be something happening well into the night. You can watch the EPL or sit and chat in a more relaxed environment. The rooftop adds a whole new dimension when combined with the nightclub.”

The Albion Hotel brought together the talents of ITN Architects and Visual Builders to produce the result. It’s a collaboration built on an eye for detail and pragmatism, according to Matt Darcy: “Budget constraints are always challenging but the architect ITN and Visual Builders understood what I was trying to achieve. I think the key to design is to look like you’ve spent $10m, but actually spend $5m. I think we’ve managed to do that by having time to take the architects’ plans and schedules and then source comparable products. You know, we didn’t want to lose the design intent but we needed to be smart in the way that we went about it. And I think by having a collaborative approach with the builder and with the architect made that an easy process.”

Australians love a rooftop bar. Melbourne’s weather is notoriously fickle — four seasons in one day, as they say. So making the Albion’s rooftop bar not only accessible all year round but actually enjoyable and comfortable all year round took planning and investment. Louvered and retractable roofing systems combined with rectractable screens weatherproof the venue as well as protect patrons from summer sun. With a press of a button the rooftop bar can be entirely open or completely shut down and protected from the elements.

But patron comfort on the rooftop isn’t something staff can ‘set and forget’: “With Melbourne’s weather it can be 30 degrees one minute and then hailing the next,” observed Matt Darcy. “It’s so important for our management team to pay attention to detail. By having the versatility of automated blinds, if the wind suddenly changes from a southerly to an easterly we have that ability to immediately respond. The heating’s also very important when it comes to creating the perfect ambience and temperature. Lighting, the sound and the heating is something that our management team are constantly monitoring and that’s what we pride ourselves on: providing an amazing product by ensuring all those components are looked after.”

Matt Darcy elaborates on his choice of Bromic heating as a crucial element in providing patron comfort: “We went with Bromic because I like the ambience the heaters create. Their glow isn’t overbearing. I think that’s important when you’re designing a place where you spend so much time on ambience and lighting: you don’t want your heaters to radically change the mood. That’s why I like the Bromic product: they’re a great heater because they produce a lot of heat but they also blend in nicely with the aesthetics of what we’ve created on the rooftop.” 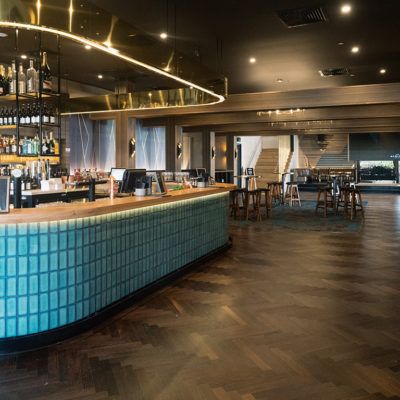 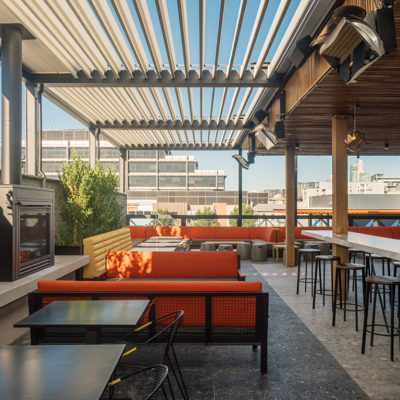 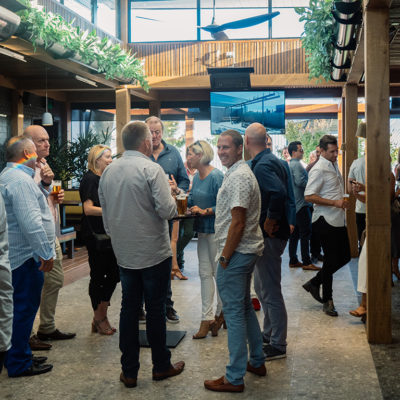 Matt Darcy: “The audiovisual component is extremely important. We’ve used The Disco Doctors on a number of previous projects and we’ve always used Martin Audio sound systems. I think there’s an increasing level of appreciation for good sound by clubbers. It’s something you certainly don’t want to skimp on and we invest a lot of money in our audio and visual systems, because it is such an important component of the business we’re competing in. Martin Audio has been great in creating that product and that vibe we look for here.”

The function room/nightclub audio is distributed throughout the room, rather than relying on an oversized left/right PA. The result provides enough energy on the dancefloor but also allows those at the bar and in the booths at the back of the room to chat comfortably. Martin Audio’s new CDD surfacemount loudspeakers really shine in this regard. They’re a coaxial, point source speaker with an innovative waveguide that provides smooth, even high frequency response regardless of where you’re positioned in relation to the source — makes it easier to design a system that’s free of hotspots and deadspots. The loudspeakers are powered by QSC PLD series amps, while BSS Soundweb processing takes care of the delay, zoning and EQ etc.