Adelaide’s family-run Rezz Hotel breaks the pub mould, and community is all the better for it.

It doesn’t take long to realise that the Rezz Hotel in suburban Adelaide is no ordinary pub.

Sure, there are the 16 beers on tap, all beautifully curated and served, but there’s not a single piece of third-party promo to be seen. ‘Jack’ might ‘live’ here, but you wouldn’t know it.

Front and centre is the food offering — glorious displays of amazing produce, and a show kitchen.

The fresh approach comes from the owners, the Hamood family. After being in fast-paced retail for many years, director Richard Hamood, has taken what he knows about successful retail and applied it to hospitality. “We felt that most hotels are too blokey. You come into a hotel and you’re confronted by the front bar, football on the TVs, and beer promotions. We didn’t want that. We wanted people to come into an open Mediterranean piazza, where they could be part of community and be surrounded by beautiful food options.”

The pub has been in the family since the mid ’60s. Before too long they leased it to an operator, until it was operated by ALH for many years. For one reason or another, the pub’s reputation suffered and the offering declined, until it became little more than a pokies refuge.

Around 2010 the Hamood family took back control of the pub after the lease was up for renewal and started drafting plans for a complete overhaul and redevelopment of the site.

The plans were ambitious, unconventional and required considerable investment. As Richard Hamood recalls, his application for finance coincided with the banks pulling their heads in during a royal commission. Still, money was secured to finance the hotel component of the redevelopment — an 80-room accommodation offering and 300-cap exhibition/conference centre would have to wait for the time being.

The old pub was almost completely demolished while a new one was to be constructed. Then Covid struck.

“Fortunately, we rode the wave in on the cost escalations,” muses Richard Hamood. “If we built six months or 12 months later, it might have cost us another 30% more.”

Richard found a like-minded collaborator in Studio Nine Architects to design a hotel heavily influenced by Mediterranean culture, which also reflects the make up of the community it serves. Between them they developed three core values that all aspects of the new build would abide by: 1. The Rezz wouldn’t look and feel like a regular pub; 2. It had to have a ‘wow’ factor; and 3. the design and the food offering would be evocative of the Mediterranean.

The hotel’s ‘grand piazza’ provides a meeting spot and a sense of community. Yes, there’s privacy for those who want it but the pub is built around a sense of sharing life. As we all know, food is crucial to Mediterranean hospitality, and the Rezz wears its heart on its sleeve in this regard. The open kitchen, the rotating pizza oven, the churros frier, the array of charcuterie and fresh produce is mouth watering and compelling.

What’s more, the other cornerstones of a big suburban pub are also covered: a well-equipped sports bar with TAB facilities; a very smart pokies lounge; along with a swankier cocktail lounge and restaurant area. Topping it off are extensive lawns for patrons to enjoy the sunshine. Truly, there’s an option for any time of the day or night to relax and socialise at the Rezz. 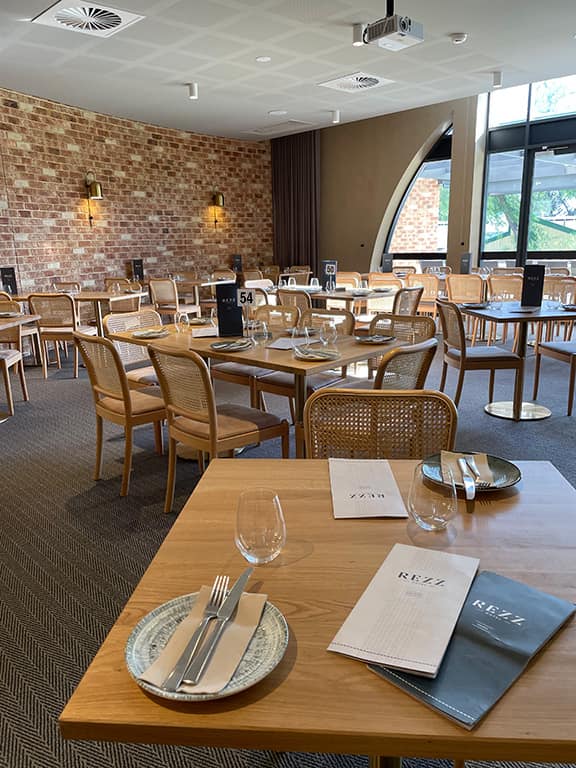 The Rezz had an increasingly fraught relationship with its audiovisual technologies in the final years of the old pub. Richard recalls the embarrassing encounter he had with a patron in the sports bar who insisted the bar staff switch the big screen over to the State of Origin rugby. When pressed as why he was being refused, Richard had to confess that no one knew how to do it — such was the situation with band aids being placed over band aids to keep the AV technology on the road… just.

Everyone was determined that things would be very different when the new Rezz was to be inaugurated. “Simplicity of use was the main criterion,” admitted Richard Hamood. ”Previously, staff would struggle to make any adjustments and when they did, often things would go wrong.”

Richard had a long association with Sam Pergoleto and Adam Andary from Home Digital Services, and they were involved early on in the design process to ensure the right system was planned from the start.

“This is a complex build with a good number of independent zones,” comments Sam Pergoleto. “But we wanted the interface to be as simple as possible for Richard and his staff. We’ve relied on Bose Professional systems for a long time, in no small part because of its ease of use from an operator’s perspective. We have CC-64 control panels in two locations and it’s as simple as selecting a source per destination and a volume control. Staff can’t get themselves into trouble, it’s a very simple interface.”

“When you’re dealing with dozens of loudspeakers in a background music system, I’d suggest that a 100V line approach is the best approach,” contends Adam Andary. “You don’t have to be concerned about pairing speakers; you know the Bose amps are providing a consistent delivery of audio to every speaker in the house. It’s all perfectly integrated.”

There are some nine zones in all. Predominantly the loudspeakers are Bose Professional DesignMax 3 in-ceiling models that provide and even coverage of background music. Weather-resistant Bose DesignMax 5SE surfacemount loudspeakers are used outdoors.

Adam and Sam are all too familiar with ‘scope creep’, as publicans’ expectations and horizons expand. Another reason why they’ve stuck with Bose Professional hardware over the years. Sam Pergoleto explains:

“The beauty of Bose product and why we love working with it, is the flexibility to upgrade. In the world of hotels and hospitality AV you’re always dealing with expansion and additions. Thankfully, Bose makes those changes as easy as possible. Adding zones is easy. It’s easy to add a controller. Using Bose’s Dante-based product, such as the Amplink cards for the Powermatch amps makes life easy. Already, we’re upgrading the audio spec for the Rezz and it’s straightforward and cost effective.”

The Hamood’s family mission, to take the Rezz from dingy hospitality pariah to its rightful and historical place as an integral part of the local community, is well under way.

“We’re losing the high street shopping experience and people are being forced to eat, drink and socialise in, effectively, food courts. We were determined to give our community a better option. Somewhere they can come simply drop by for a coffee and read the paper or celebrate life’s big events. And some of the greatest satisfaction I get from running the Rezz is seeing people and families return time and again because they enjoy being here. We’re very proud of what the Rezz has become.”