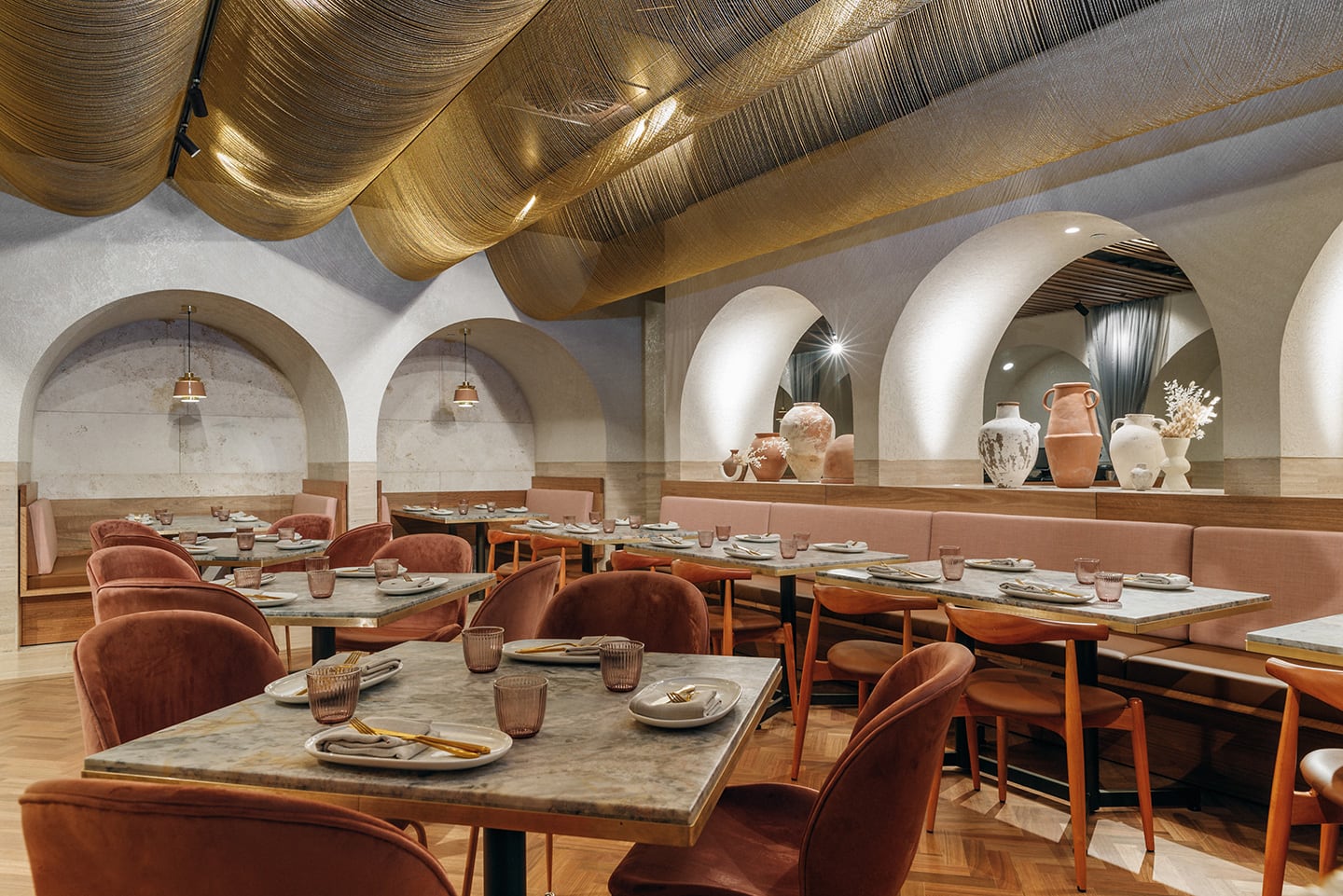 It’s quite the real estate coup. The Mantle Group got the inside running on the fact there was prime space on top of Pitt Street Westfield that was going begging… and moved in.

Mantle Group has now greatly increased its Sydney footprint with the launch of two new venues on the 7th level site: a cantonese diner called Duck & Rice, and a larger bar and restaurant, Babylon.

Babylon sprawls over the 1200sqm site, drawing on the exotic hanging gardens vibe of the wonder of the ancient world. From the outdoor bar and live garden terrace through to the sleek inner bar with a magnificent 9m bar-top crafted from Emperador dark gold Spanish marble and onto a collection of vibrant dining spaces, Babylon is something special.

HEART OF THE INTERIORS

The interiors (courtesy of Hogg & Lamb architects and interior stylists Stewart+Highfield) are inspired by ancient Babylon. The layout entails a series of adjoining buildings and rooms, bound by a ‘laneway’ leading you from the restaurant through to the outdoor terrace, which is framed with abundant greenery.

Natural coarse elements such as split-face travertine and hardwood timber set of the silky plush upholstery, with each space providing a different drinking or dining experience. Lining the walls of the entire venue are Italian beige travertine archways with booth seating, while more than 600 bottles of wine fill three wine walls.

With a total venue capacity of 800, there are multiple private and semi-private spaces available for events and entertaining within the bars and restaurant including the turret dining space located on the outdoor terrace for six guests, a private dining room for 20, plus various areas for large group dining and cocktail events.

The restaurant features a tailor-made Ege carpet in the private dining room, a canopy of gold beaded chain and soft curtains of pink and blue-grey. The interior floors are Herringbone parquetry and spotted gum timber while tables are made with Verias Green marble from Greece and Orazia Gold marble from Cairns, all edged with brass. Burnt orange and pink mauve velvet clad the private dining room chairs, while the rest of the dining spaces house unstained mahogany chairs and bar stools with leather upholstery.

Babylon is part of the Mantle Group of hospitality venues, which includes a number of pubs and restaurants in Brisbane, as well as the Charming Squire at the Overseas Passenger Terminal on Circular Quay. The Mantle Group takes its entertainment very seriously, seeing it as vitally important in creating the right atmosphere for its patrons.

Most Mantle Group venues have live music most days of the week. We’re talking about soloists and duos, in the main, and it remains a big commitment for the hospitality group and serves to set it apart.

With this in mind, Babylon retained the services of Gigawatt, a Brisbane-based AV integrator and installer, relying on it to provide the best possible audiovisual experience for its customers.

Babylon and its sister restaurant Duck & Rice are connected from an AV perspective. Management wanted to ensure live music performed in Babylon could be easily piped into the Duck & Rice restaurant if desired. This link is via a Dante (audio over IP) connection between a Symetrix Prism 12×12 audio matrix units in each venue.

Gigawatts’ Ben Finlay explains why he’s installed more than 300 KV2 Audio loudspeakers into Mantle Group venues over the last few years: “They sound amazing. But KV2 also designs its speakers to be really practical. Each ESD6 is a 16Ω box which means you can drive eight loudspeakers from one amp channel. It’s rare to have more than eight speakers per zone so you can cover four zones and 32 loudspeakers with one four-channel KV2 amplifier, which are entirely stable at 2 Ohms.

“The client is a huge fan of KV2 Audio and great sound quality. They notice the difference a great sound system makes. They’ve commented on other venues that use 100V line systems and how the sound tears people’s heads off and the negative impact that has on customer interactions. What we’re doing with KV2 Audio is totally different to that, it’s like chalk and cheese.

“The KV2 Audio equipment is also rock solid. We’ve not had a loudspeaker or amp go down, which is really important to us as a Brisbane-based company doing work in Sydney.”

Controlling levels in different zones of the venue normally requires wall controllers or iPad-style control. Interestingly, Gigawatt has taken to co-opting the POS terminal touch panels to take care of level control. In this case, Gigawatt has installed a Symetrix ARC3 zone controller in the rack as a failsafe, but day-to-day loudspeaker level adjustment takes place on the H&L POS terminal. Gigawatt also designed the Symetrix GUI to work on staff iRuggy devices, which are used to take table bookings and customer orders. In fact, any device running Windows is a candidate to host the Symetrix GUI, saving the client money as well as one less device or controller to be concerned with.