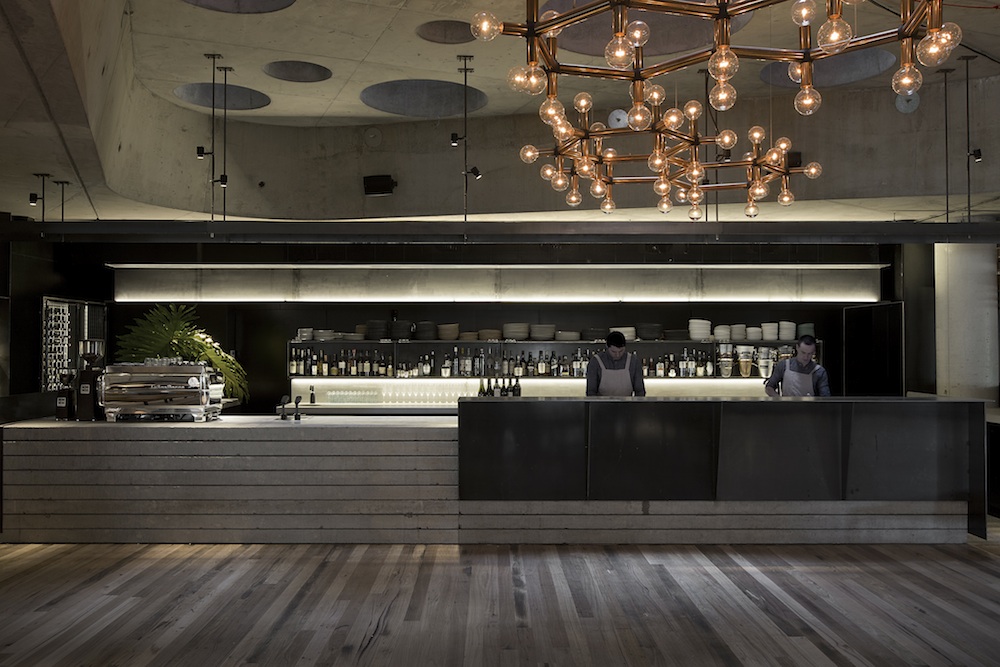 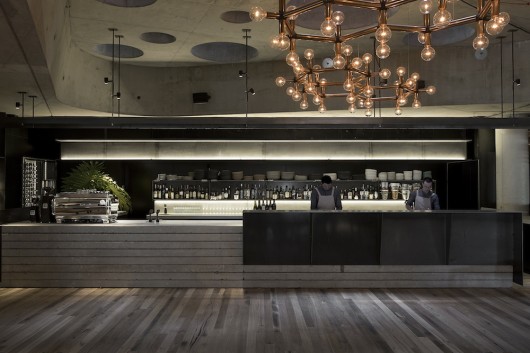 While not the biggest component of Nishi, Hotel Hotel is the soul of the building. In a capital where you rarely stay stationary long enough to take in the sights, having a place to dwell is refreshing.

The lobby isn’t grand in the traditional sense, but it’s expansive — a lair that can be accessed from all sides. The concierge and reception desks are the small hotel sort — capable, but not vast, or onyx. Lined with custom gluelam timber and backed by a concertina mirror, the desks rim the entryway rather than blocking it. Their placement lets you take in a big part of the Hotel Hotel experience in one sweeping gaze: the ski lodge-esque gas fireplace; its broad hearth surrounded by stacks of railway-style concrete sleepers arranged into banquettes; a comfortable reading nook full of design books; and a generous bar and communal dining area with tessellated, wooden parallelogram-shaped tables supplied by artists under Broached Commissions. Around the other side of the fireplace are more copper-topped tables and a mosaic wall of Gerard Havekes’ ceramic tiles.

MEET AT THE CAPITAL

The lobby is intended to be a gathering place for that end of Canberra, attracted by free internet, a glass of water, and live jazz after work. “We’re very close to the Australian National University,” said General Manager Tracy Atherton. “We want the students to come in, and the commercial operators; we don’t want it to be that five-star lobby where people get intimidated walking in.” And so far it’s working. On a quick survey, Atherton doesn’t think any of the crowd in her lobby are guests at all.

There’s still a fair bit to come. Soon, the generous lobby will also function as a restaurant, though at the moment a pile of shifting vintage suitcases obscures the parse. A hair salon is planned in one of the adjoining spaces, while a pop-up boutique for designers was also running, but its future uncertain. Regardless, all through NewActon are a range of restaurants, bars, cafés, food stores, a day spa, and even the Palace cinema, so you’ve already got an abundance of choice.

Melbourne’s March Studio (known for its Aesop store designs) designed the lobby area. It has an underground bunker feel to it, in the comforting sense of security that only heavy materials bring. The central light well is lit by porthole skylights that poke through the garden above, and a re-approppriated 1930s chandelier taken out of an Italian railway station fills the space well.

It’s difficult to break down the collaborations here, because everything fits together so well. Lighting specialists Point Of View has gently highlighted the Fender Katsalidis architecture, March Studio’s interior, and  vintage pieces from aesthetic curator Don Cameron.

While POV design director, Mark Elliott, and his team are still passionate about the quality of light from a halogen lamp, that kind of energy consumption was never going to pass muster in a green building like Nishi — so LEDs were first choice throughout. The brief given to POV was conflicting: on the one hand, the aim was to minimise the visual impact of light fittings — POV used integrated cove and joinery for a lot of the ambient lighting; but the commission also included clear instructions to not be too slick. A lot of the exposed concrete is exactly as it looked when the formwork was pulled off, with any non-offensive builder’s marks left intact. So rather than recess lights, POV developed a custom bracket for the surface-mounted spots that made them purposefully obvious.

There’s no shortage of lighting apparatus in the rooms, with the control panels providing a good deal of dimmable diversity; but the whole scheme pushes the limits of darkness and functionality. It’s all about letting people look their best and a “sexy” nighttime experience, said Elliott.

The dramatic lighting matches Don Cameron’s role as Aesthetic Curator hand in glove. Cameron — with a background as a music video and commercial director — is a first-time hotel designer, and an inspired choice for Molonglo Group directors and brothers Nectar and Johnathan Efkarpidis.

Cameron treats each room like a potential dolly shot. The logic follows, if you’re tracking a shot through a doorway, your first impression shouldn’t be so workaday as a desk, but a piece of hand-selected art or one of the many reupholstered vintage pieces of furniture; a point of focus that immediately sets the scene. There’s a collection of makers and artists who provide interesting pieces: Amos Enders-Moje’s recycled bottle glassware is beautifully restrained; Kloke provided the staff’s wardrobe; and there are plenty more contributors you can find on Hotel Hotel’s website.

The Meandering Rooms are Hotel Hotel’s flagship offering. Each is unique, but they eschew traditional suite designs for a winding layout, where the breakup of areas is achieved without room dividers.

There are all kinds of finishes lining the different surfaces: matting at the bedhead; rough render walls; cabinetry and panelling of chipped Eucalypt with a wax coating (which translates loosely to ‘high-end OSB’); cast textured concrete hallway; raw concrete ceilings; and dark bulkheads concealing air-conditioning and LED lighting that stretch the entire length of the room.

Bedside control banks allow you to select the desired mood lighting, night lights, blind controls, as well as buttons for Do Not Disturb and Make Up My Room. And an iPad allows you to check on Hotel Hotel’s room service offerings and search for who made that glassware.

Fur covered chairs, curved red sofas, and distressed fabric wingbacks are just some of the vintage pieces you’ll find yourself sinking into. But the most sinking will be done in the generous stone egg-shaped bath. In the gloriously spacious bathroom, you’ll also find double basins, double rain showers and plenty of Aesop product to get you in a lather. The rooms are obviously put together by someone that understands luxury without cutting corners.

Cameron’s appointment wasn’t the only anomalous hiring decision at Hotel Hotel. According to one of the staff, the hiring policy isn’t to fleece other hotels of their experience, but scour other industries for the cream, and train them up from there (in this case a Melburnian retail assistant remodelled into a convivial concierge).

It means there’s a diverse range of experience that keeps Hotel Hotel from being a stodgy hotel experience. “We didn’t want it to be a five-star hotel where you check in and get a bit of attitude from the front desk staff,” explained Atherton. “We wanted to hire engaging staff, so we did casting calls with team-building exercises to see people’s personalities come out — you can train people how to use a computer system. For the key positions, they’ve gone with skill.” Atherton herself trained at the Hyatt, before spending 10 years with Aman Resorts in Asia, which has a similar environmental ethic to Hotel Hotel.

Hotel Hotel is part of the Design Hotels Group, which not only provides the hotel’s booking back end, but also lets people know where the brand fits in the scheme of hotels. And don’t expect to find a lot of Aussie pollies in the lobby; the room tariffs are slightly higher than the government caps allow. Hotel Hotel is for ‘people people’ who want to experience the capital with a fresh outlook. 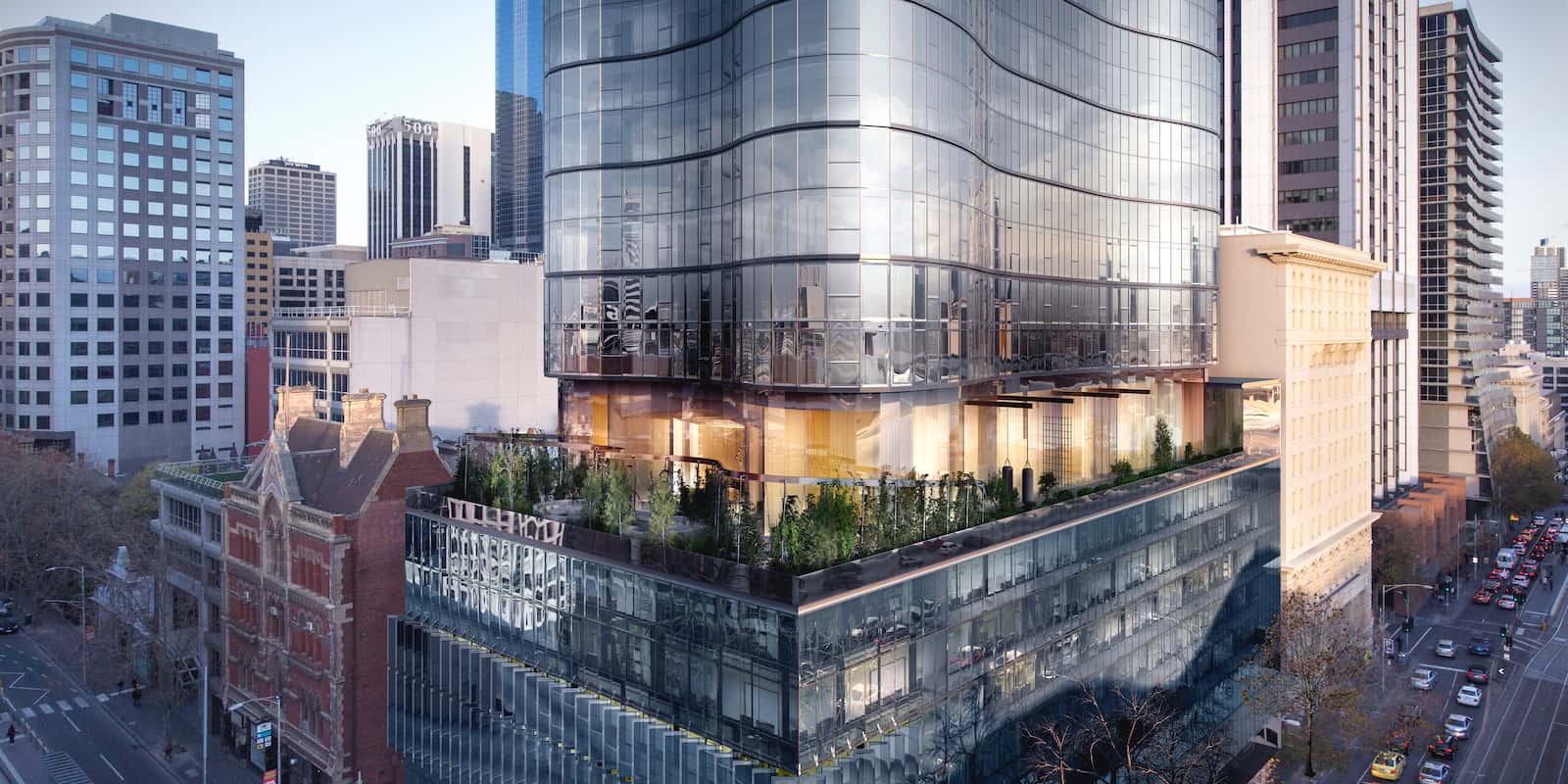